After Over 40 Years of Public Service Water Industry Veteran Retires 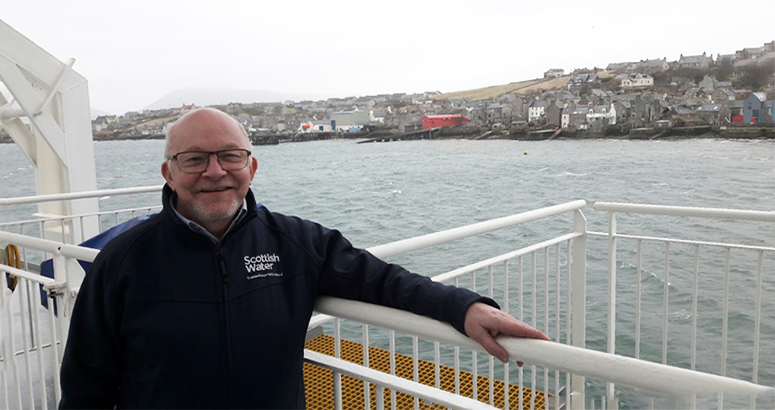 Steve Scott is retiring  after four decades in the water industry.

Few people tend to stay in the same role for any great length of time in the modern working world, but a Scottish Water employee from Fife has been recognised for 42 years of public service as he retired recently.

Steve Scott has had various roles in the water industry since the 1970’s and finished his last day at Scottish Water at the end of March.

The 65 year-old has been part of a changing landscape as responsibility for water services changed from various regional structures through the years, to the nationwide publicly owned utility Scottish Water, which was formed in 2002.

Throughout his career the father of three admits to a real pride in working in the water industry and being part of a key service that impacts on the lives of every person across Scotland.

Steve, from Tayport, started his four decade career in 1976 in an admin role at Tayside Regional Council’s water services department.

Steve said: “During my time there I was encouraged by the Director of Water Services to train for an engineering role. I studied part-time at college in the evening for an HND in Engineering, while working in my admin post during the day, and once qualified took up a job as a technician in water services, before being promoted to an assistant engineer.

"I stayed in that role until 1996 until North of Scotland Water Authority took over the responsibility for water services from the regional council, when I became a project engineer.”

After 2002 Steve’s role changed again, when all three regional water authorities were brought together to form Scottish Water.

This was when his career took a new path, although still in the water industry he became part of a key group brought together in a two year role, to harmonise the terms and conditions for the employees moving from the three regional authorities into Scottish Water.

Steve, who had long been involved in the trade union movement and still is to this day, continues:

“I was asked to join the staff side negotiations to harmonise the conditions for all staff coming into the new organisation, Scottish Water. This was a two year secondment and was an important role in helping ensure employees from the north, south and east water companies were all working under similar terms and conditions under the new publicly owned utility.”

Once that secondment was complete Steve had an option of returning to his role in engineering, or taking a new path in a newly set up department.

Steve said: “I was offered the opportunity to join the newly set up communications team to cover stakeholder management so I joined at the very start of that team and have been there ever since. The difference in approach to customer liaison in my forty two years in the role is night and day.

"At Scottish Water the focus is totally on customers, and we put them first in all we do, whereas in the past it was more about getting the job done and customers may have been secondary to that. That’s certainly not the case at Scottish Water.

"My role in communications took me all across the east coast, from Shetland to Fife, and I was lucky enough to meet people from different types of communities, both urban and rural, and getting that opportunity and visiting some of the most beautiful parts of the country has been an education and an incredible experience for me.”

Throughout his career the Fifer has always felt real pride in working in the water industry and is under no illusions the importance Scottish Water plays in the lives of people across the country.

He added: “Scottish Water is a publicly owned utility and that for me ticks a big box. We go about our work every day, a lot of that work unsung, and we don’t shout from the rooftops about it, but a lot of what we do is vital to everyday life in Scotland.

"From my experience travelling Scotland, the pride I have in the organisation is widely felt too among the public across the country.”

Asked what he will miss most of all now he is retiring Steve said: “The people. Without a doubt, the people. I enjoyed the work and it’s been a privilege to work in the water industry alongside a lot of talented people. Scottish Water is lucky to have some brilliant people working for the organisation and it has been a pleasure being part of the team.

"I would encourage any young person looking for a long and fulfilling career to consider working in the water industry. It’s a unique and vital industry and a very worthwhile and rewarding career.”

The grandfather though is planning for a busy retirement, looking forward to spending more time with his family, and travelling the world to new sites with his wife.

The Dundee United season ticket holder also has plans to devote even more time spent at his beloved Tannadice.

Brian Lironi, Scottish Water Director of Corporate Affairs said: “Steve’s hard work and dedication over the last 42 years and his service to customers across the country have been truly remarkable.

"Every member of the team who has worked alongside him through the years has gained from his knowledge and expertise, and the kind of person Steve is, he was happy to help his work colleagues in any way he could.

"Scottish Water’s vision is ‘Trusted to Serve Scotland’ and few people have done more to earn that trust than Steve. Everyone at Scottish Water wishes him a very long and happy retirement, and from a personal point of view it’s been a privilege for me to get to know him and work with him.”