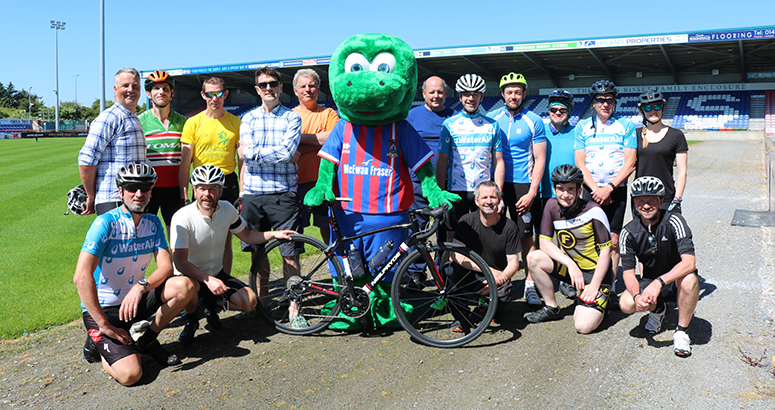 Cyclists set off from the Caley Stadium in Inverness

Scottish Water employees have raised £5000 for charity after completing an epic 500-mile cycle around the Highlands in just 48 hours.

Including gift aid, the group of 16 have so far raised £5042 through their efforts, which will be shared by WaterAid and Highland Hospice.

The challenge saw the cyclists set off from the Caledonian Stadium in Inverness on Thursday, June 28, taking in Lairg, Helmsdale, Durness, Achmelvich, Ullapool and Applecross, before returning to Inverness via Muir of Ord.

The team cycled through the day and night in groups of at least two at a time, splitting the route into relay sections which included the iconic but gruelling Bealach na Ba road, with a number of riders clocking up in excess of 250 miles each over the duration of the route.

This is the fourth time Scottish Water employees have completed the challenge, which has followed variations of the North Coast 500 route, with around £20,000 raised for charity over the years.

Team leader James MacInnes has been integral in organising the event since the start.

He said: “This year, out of the all the years we’ve done the challenge, has got to be the best year. The weather was with us completely – usually we get wind and rain from the start and everyone is miserable and soaked through, but this year it was just blazing sunshine from the minute we left.

“The scenery was the best bit for me, and the people – the people have been amazing. Sleep deprivation is always the hardest part. I don’t find the cycling itself that tough, but the sleep deprivation over the course of the 48 hours does take its toll."

He added: “We are delighted to have been able to support WaterAid and Highland Hospice again this year and are hugely grateful to everyone who has supported us by donating.”

Scottish Water Networks Analyst Brian Barbour has also taken part in all the previous cycles, each of which has covered a variation on the North Coast 500 route.

He said: “The weather was amazing and the whole event just went really smoothly. The squad taking part was great and the teamwork was fantastic – from planning out the route and the different sections, to making sure we were always fed and had someone to drive the support vehicles. We had a number of new recruits taking part this year and everyone came together really well.

“We started the challenge because we wanted to raise money for two very worthwhile causes, as well as promoting team building and health and well-being among Scottish Water employees and it has been great to see the way it has developed and grown over the years.

“I’d like to thank everyone who has supported the event and all our sponsors – the response has been fantastic and we are all looking forward to next year’s event already.”

Lisa Long, Corporate Fundraiser at Highland Hospice, said: “We’re so honoured to be chosen as one of the benefiting charities of the Water Cycle. These guys show so much enthusiasm and commitment every year and it’s just amazing that they have now raised over £10,000 for Highland Hospice.

“On behalf of everyone here we’d like to say a massive thank you to each and every one who has cycled, joined the driving support team, and helped to plan the cycle over the last four years and raised so much money to support our patients and their families.”