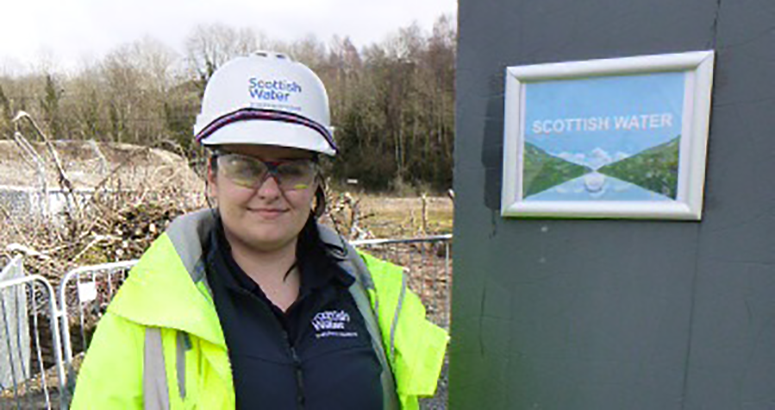 Apprentice Learns on the Job

This Scottish Apprenticeship Week 2018, Scottish Water is issuing an update on its environmental investment project in Paisley - a project where modern apprentices are working together with Scottish Water and its contractors to improve the water quality and natural environment in two local watercourses.

Scottish Water contractors Amey are constructing the large interceptor sewer which, once completed, will substantially reduce the frequency of spills from the sewer network into the Espedair Burn and White Cart Water in storm conditions. The project will therefore improve the river water quality in the two watercourses and, in turn, the River Clyde.

Twenty-three-year-old Gemma Mellon from East Kilbride saw an apprenticeship with Scottish Water as a fantastic opportunity to learn on the job, earn a wage along the way and grow with the business. She joined the Paisley project in October last year.

Speaking about her experience so far, Gemma said: “For my apprenticeship it’s necessary for me to spend time with various parts of the business. I was thrilled when I was given the opportunity to work in Paisley as it’s such a massive project!”
“Each and every day at work I learn from the experienced members of my team who are always willing to share their knowledge and understanding with me. I get to go out on site and see first-hand how things are built instead of learning about it in a class - much more interesting!”

Commenting on her day-to-day activities, she added: “I’ve really enjoyed seeing the progress with the tunnelling on this project. Just some of my tasks include taking part in daily review meetings and monthly progress meetings, and I also put out equipment for sound and vibration so we can keep track of the disruption and try to minimise the impact it will have on the public.”

Twenty-year-old David Coulter from Glasgow is a modern apprentice with Amey and has been working on the Paisley project since June 2017. Commenting on the work he’s been doing, he said:

“As an apprentice on this site I’ve had the opportunity to get involved in a number of activities that aren’t carried out on everyday building sites. Although my typical day on site often involves duties like traffic management and carrying out trial holes, getting insight into the tunnelling and shaft sinking on this project has been great.”

He added: “The apprentice programme has allowed me to gain practical experience and I’m now lucky enough to be in the process of joining Amey as a full-time member of staff.”

Amey has recently brought three new apprentices who were released by Carillion into their Scottish Water work programme. They’ll be supporting those apprentices through the remainder of their apprenticeship.

This Paisley investment is the biggest Scottish Water has ever made in Renfrewshire and forms part of the utility’s £250m, five-year programme of work, launched in 2013, to improve river water quality and the natural environment and tackle flooding across the Greater Glasgow area.

A short film about the £17m project gives viewers an insight into the construction of a one mile–long sewer under the streets of Paisley, and the installation of Combined Sewer Overflows (CSOs) in the town centre.

Speaking in the film, Ruaridh MacGregor, Scottish Water Corporate Affairs Regional Manager, says: “You can see that there is an impact on local residents, businesses and road users. In the short-term there is some disturbance but we try to, wherever possible, minimise that impact.”

The film also features Brian Boland, Project Manager, who explains the work that’s been carried out so far.

This Paisley investment is the biggest Scottish Water has ever made in Renfrewshire and forms part of the utility’s £250m, five-year programme of work, launched in 2013, to improve river water quality and the natural environment and tackle flooding across the Greater Glasgow area.