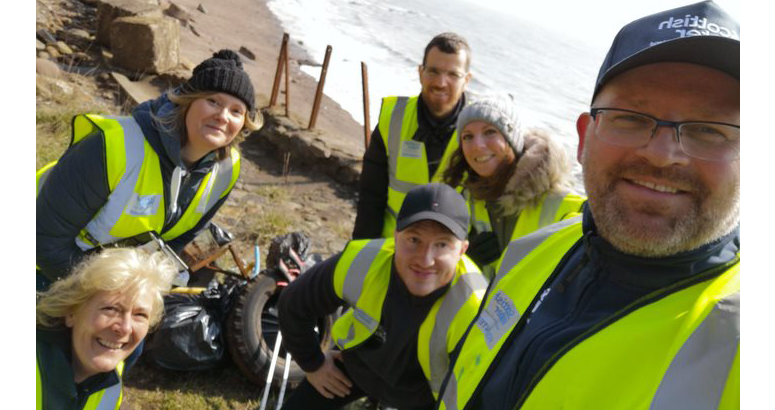 Volunteers from Scottish Water took part in a major beach clean at both East and West Wemyss beaches – where they filled 10 bags with rubbish including a large rubber tyre and traffic cones.

It is the fourth time a group of volunteers from the utility has carried out a clean-up on the sites after it “adopted” the beaches via the Marine Conservation Society (MCS).

This data is sent to MCS for them to record and log, contributing to its ongoing Beachwatch programme. The event was part of the ‘Adopt a Beach campaign’ – which Scottish Water joined a few years ago. Working with MCS’s Beachwatch programme, volunteers carry out a litter survey of 100 metres of adopted beach and then clean up that area.

Lorraine Bruce, Corporate Events Manager at Scottish Water, set up the event, choosing the area as it was where she spent much of her childhood with her family. She said: “I adopted East and West Wemyss Beaches a few years ago as part of Scottish Water’s Adopt a Beach Campaign. I wanted to help look after these particular beaches as there is a family connection to the local community, it’s where I spent many childhood holidays when I was able to access East Wemyss beach from my grandparent’s garden.

“It is so rewarding taking part in beach cleans like this as you know it is helping clean up the area and protect the environment and wildlife. It is fun coming along with colleagues – and when we saw how much litter we had picked we felt a sense of accomplishment. I’d encourage others to help care for a nearby beach and get involved.

“Locations such as these on the beautiful Fife Coastal Path and around all of our coastal waters need the support of like-minded campaigns to rid our beaches of the litter washed onto them on left on them.  The majority of the rubbish we find can be avoided if we all take a bit of time and effort not to put the wrong thing down our sinks and toilets.”

Since the launch of Scottish Water’s campaign, it has cleaned almost half of the 49 beaches we adopted which stretch from Aberdeenshire to Dumfries & Galloway.

Scottish Water urges its customers to ensure they do not put ‘unflushables’ down toilets and into the sewer network as they potentially pollute our beautiful beaches and rivers. It highlights how the three Ps – pee, poo and toilet paper – are the only things which should go down the loo. Materials such as wet wipes and sanitary products can collect in large clumps in Scottish Water’s 31,000 miles of sewers and waste water pipes which can lead to blockages, bursts, flooding and pollution.

Catherine Gemmell, Scotland Conservation Officer for the Marine Conservation Society, said: “It’s fantastic to see Scottish Water continuing to support our Beachwatch project by collecting the important data we need to establish what is turning up on our beaches and what action needs to be taken to prevent it getting there in the first place. We would encourage everyone to follow Scottish Water’s lead and head to their local beach to take part.”

Last year during MCS’s flagship beach-cleaning event, the Great British Beach Clean, volunteers recorded a 14% increase in litter across Scotland with 559 items of litter found for every 100m of beach surveyed in Scotland.

Over the last 25 years MCS says this data has helped make some of the most significant impacts on beach litter ever, including the plastic bag charge, the ban of micro-plastics in personal care products, clearer wet wipe labelling, as well as recent commitments to ban plastic stemmed cotton buds and introduce a deposit return system for drinks containers.