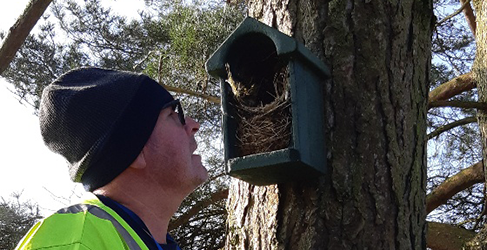 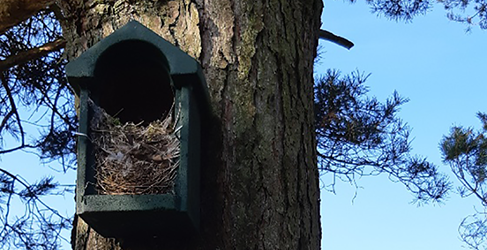 A project to help save the native Tree Sparrow with the help of a project at Scottish Water sites across Dumfries and Galloway has got off to a flying start.

RSPB Scotland contacted Scottish Water a few months ago to say it believed the utility had ideal sites within land of its water treatment work to install bird boxes to encourage the bird to breed.

The Tree Sparrow, also known as the Spug, is on the Red Data List of species on the Birds of Conservation Concern – meaning its status is ‘highly threatened’.

The organisations put up 21 bird boxes in time for the 2018 breeding season and following nest box checks the RSPB has now confirmed 15 of the boxes were used by nesting birds – six of which were Tree Sparrows.

Scottish Water paid £300 towards the first batch of boxes to be put up and following their success will donate a further £230 for additional nest boxes in order to build-up the initial success of this conservation project.

The boxes are made of solid woodstone material, which the RSPB believes is the most durable, and have already proved a success in attracting the birds to the nests in the area.

Scott Fraser, Scottish Water’s corporate affairs regional manager, said: “It’s wonderful these boxes have proved such a hit. We know the amazing work that goes on at our water treatment works – and to think they became temporary homes for our feathered friends is just great.”

Research showed the availability of wetlands for nest sites such as rivers, ditches or ponds can increase breeding by providing a rich source of insect food. This is why the location of Scottish Water treatment works in Dumfries & Galloway were picked as ideal to install nest boxes to attract the tree sparrows for the crucial breeding season.

Julia Gallagher, RSPB conservation officer, said: “We are delighted with the positive results from uptake of the nest boxes. Although we expected at least some of the boxes to be used we were over the moon to find that so many had been nested in and that six of the 15 boxes erected had been used by tree sparrow. This is a very good result for year one since tree sparrow can often take a couple of years to get used to new boxes.

“Since this has got off to a good start it is now beneficial to build up the boxes at the three sites where we have recorded them so far - Thornhill, Lockerbie and Annan. Tree sparrow is a colonial nester and so there’s safety in numbers. We want to thank Scottish Water for the ongoing support with this exciting and beneficial project.”

The bird boxes were installed at Scottish Water sites across the region – in Annan, Dalbeattie, Dalscon, Dumfries, Lochmaben, Lockerbie, Thornhill, and Troqueer. Although there are signs of recovery for the tree sparrow population in Scotland with numbers starting to rise since 1994, the current population estimate for tree sparrow is just ten percent of what it was 50 years ago.