On the Scent of Leakage with Sniffer Dogs 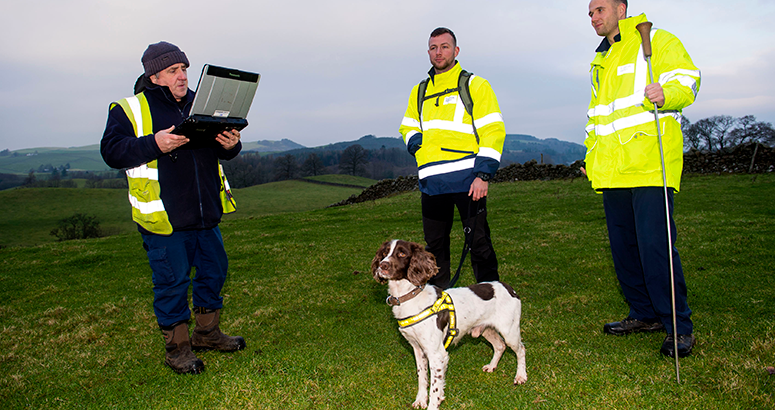 Sniffer dogs are being used to help find leaking water mains for the first time in Scotland and have scored a big success with two discoveries in the past few days.

Scottish Water is deploying a team of specially trained dogs to help locate leaks in pipes in rural areas where the water does not always show on the surface.

Two spaniels, called Snipe and Denzel, aged two and three, have been trained by ex-military dog handlers to detect the smell of chlorine in treated water.

Scottish Water is conducting trials with Cape SPC, a pest control company based near Warrington, England, who provide the service and own the dogs.

Snipe, a cocker spaniel, and Denzel, a springer, are finishing a trial programme in parts of Dumfries & Galloway and Ayrshire surveying Scottish Water’s trunk mains and searching for leaks before the utility decides whether to use them on an ongoing basis.

During the trials in the past week, the dogs found leaks on a 24 inch steel main in the Dalmellington area and on a nine inch main near Lochmaben.

Craig Garment, a Scottish Water network analyst in leakage delivery, who has been working with Cape SPC, said: “We take our responsibility to manage water very seriously and since 2006 leakage has been reduced by over 50%.

“We use modern technology such as ground microphones, correlators, hydrophones and other devices to pinpoint the exact location of underground assets and leaks.

“However, some bursts in rural locations are more difficult to pinpoint and we are always looking for innovative ways to do the job more effectively and to continue reducing leakage.

“That’s where these sniffer dogs come in and we are hoping that Snipe and Denzel can continue to demonstrate during the trial period that their sensitive noses can detect treated mains water at very low concentrations.

“When the dogs help pinpoint the exact locations of leaks we then come back to that point, investigate, excavate and repair the bursts and if their work in certain rural locations helps us achieve that then they could prove to be great assets to Scottish Water.”

The dogs’ sense of smell is about 40 times greater than human beings’ because they have up to 300 million olfactory receptors in their noses compared with our six million. They are trained by scent association and rewarded for smelling chlorine, which rises to the surface from pipes, with ‘prizes’ of balls, toys or treats.

Denzel had to be re-trained after previously working on detecting bed-bugs for hotel chains.

The dogs are not used together simultaneously to avoid distracting each other but it’s clear, from the fun they’ve been having during the trials, that they enjoy their work.

Luke Jones, managing director of Cape SPC, who are carrying out similar work for United Utilities in the north west of England, said: “The dogs’ noses are an amazing tool that can be used in many different situations.

“Using dogs to help people like the police and border security search for drugs and explosives is well known, but there are a host of other applications that we are only just starting to explore. We’re really excited by this trial with Snipe and Denzel for Scottish Water and we hope that, if successful, they can be used to help locate leaks in some of the more remote parts of the rural network going forward.”

The training starts off with tap water and then extra chlorine levels are put into the water to make it stronger and the dogs understand that the strongest odour is the one they are expected to find.

Scottish Water has 30,246 miles of water mains and its water supply system is very different to the majority of systems in England, reflecting the geography and topography of the country.

Since 2006, the utility has reduced leakage by 51% due to increased investment and pressure management and currently spends almost £8m annually tackling leakage.

Scottish Water is subject to independent economic regulation by the Water Industry Commission for Scotland. In its regulatory determination for the 2015-21 period, the independent regulator set a target for Scottish Water to achieve the economic level of leakage (500 million litres a day or Mld) by 2019/20. Scottish Water achieved this target four years early and has continued to reduce leakage further in each subsequent year, achieving 492 Mld in 2017/18.