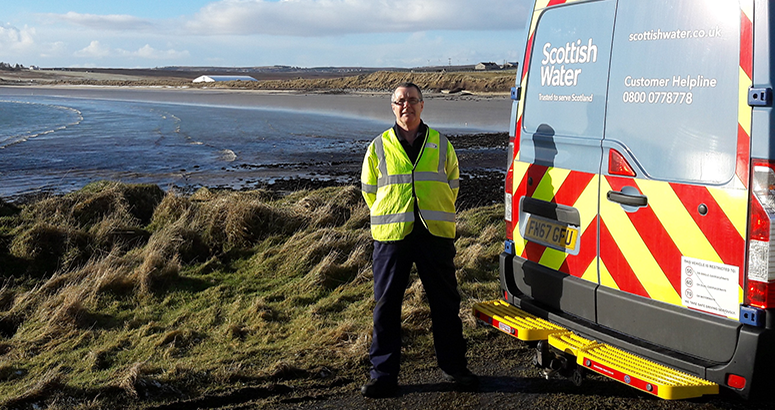 Life on the Road

Callum Carmichael has witnessed first hand the changes in the water industry over the past four decades.

A Lewis man has clocked up more than four decades of service in the water industry, serving communities across the island for 45 years.

Callum Carmichael (66), a water operative with Scottish Water, started his career in the water industry in 1972 on a temporary three month contract with Ross and Cromarty Water Board, connecting up service pipes to houses on Lewis.

“When those three months were up, the boss offered me a position which I was quite happy to take up and here I am 45 years later,” he said.

Over his time in the industry, Callum has seen responsibility for the public water supply pass to Western Isles Council and the North of Scotland Water Board, before Scottish Water was formed in 2002.

He said: “There have been so many changes since I first started, most of them for the better. When I started out we were essentially just carrying a hessian sack with a few tools in it – nowadays, we’ve got all the best of tools and gear that we need for the job.

“The emphasis on health and safety is also a lot greater now than it was back then which is a good thing.”

Explaining his role – and the challenges that go with it – Callum said:  “I’ve mostly been involved in repair and maintenance of water networks across the whole island. The island communities are very spread out so it involves a fair bit of travelling.

“The challenges we face, working on the islands, is that we are responsible for everything to do with the water infrastructure from the time it leaves the intake supply until it leaves the customer’s home - that in itself is quite a challenge, given the geography of the island and the climate at times.”

Recalling one particularly challenging incident, Callum said: “There was one night, when a colleague and I were out at an intake supply which was two miles out from the road on the moor and to get to it we had to cross quite a wide river which we could safely wade across in our wellies.

“This must have been after midnight and while we were out at the supply, there was a huge downpour, a deluge, and the river came up so high that there was no chance we were going to get back across it so we had to walk for miles across the moor until we got back to the main road at around 5am. There have certainly been various escapades over the years, but that one sticks in the mind.”

Water Operations Team Leader for Harris and Lewis, Iain Matheson, has worked with Callum for 22 years and said: “Callum is a very talented member of our team who has a wealth of knowledge. He’s been very good at passing over that knowledge to his colleagues over the years and for the last six months he has also been spending as much time as he can updating our GIS (Geographic Information System) plans.

“This transfer of knowledge onto the system is fantastic for Scottish Water. Callum also looks after our store in Stornoway which must be the best kept store in Scotland – it’s immaculate!”

Callum, who is due to retire this year, added: “I’ve definitely enjoyed my job – it’s the variety of the work, being able to be out and about and seeing different people in different parts of the island. It is different every day.”
Scroll to top