Volunteers on Track for Railway Success 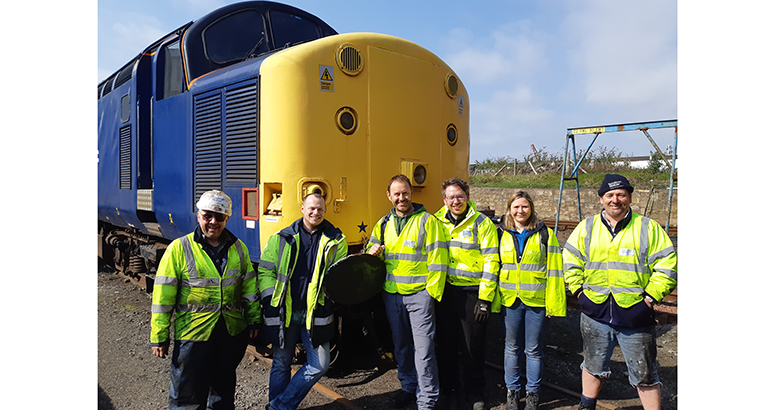 On the Right Track

A group of Scottish Water volunteers helped maintain tracks at one of Scotland’s most historic railway lines.

Six volunteers, who all work in the utility’s Resilience and Security Team, took part in a range of activities to help with the ongoing upkeep of tracks and infrastructure at Bo’ness and Kinneil Railway.

They joined members of the Scottish Railway Preservation Society (SRPS) which has a special ‘Maintenance Squad’ to help look after tracks at the popular site where the society runs vintage trains.

The Scottish Water volunteers helped to maintain the essential ‘fish plates’ on the track – the links that connect individual lengths of railway track together.

There are over 900 pairs of these on the society’s small rail network and over a rolling cycle of a couple years, every one of these heavy plates has to be unbolted, removed, cleaned, inspected and lubricated before being re-fitted.

The team spent the day working with nine other volunteers helping to remove, check, clean and refit fish plates on the Kinneil stretch of the society’s Bo’ness line.

Mark Mackinlay, who was part of the six-strong Scottish Water team, said: “We all had a great day and greatly appreciated the support and friendship of the other volunteers. The hard, mucky and physical nature of the work really gave us an appreciation of the work and effort the society’s volunteers put in in all weathers to maintain what is a fantastic example of Scotland’s industrial heritage.

“They say every day is a school day and as part of the day we were able to experience how hard the work we were helping with was in the days before automated equipment was available to help.

"This really drove home the sheer physical efforts required of the 19th and early 20th century engineers and navigators that built and maintained the railway lines that connect Scotland’s towns and cities – lines that we still use today.

“After we helped out we were kindly given a tour of the railway site and museum, which is a fascinating place steeped in history and kept going by the work of many dedicated volunteers.

“The event was a superb opportunity not only to support a worthy charity but to further develop our skills as a team. We are a small team and a lot of our work is reactive emergency work – so getting time together can be hard.  We hope to return to the railway to help out again.”

The Scottish Railway Preservation Society relies on regular volunteers to help keep the railway and museum it runs able to operate.

Andrew Anderson, Head of Civil Engineering at Bo’ness & Kinneil Railway, thanked the volunteers for their efforts. He said: “We were delighted to welcome the team from Scottish Water. Getting the track joints oiled before the hot weather season can be daunting and they did a sterling job which was much appreciated.”

The Bo’ness & Kinneil Railway welcomes over 60,000 visitors a year to its heritage steam railway and Scotland’s largest railway museum. It has the largest collection of railway locomotives, carriages, wagons and equipment and artefacts in the UK outside the National Railway Museum in York.

The volunteering programme at Scottish Water was launched in 2011. It allows every employee up to two days of leave every year to volunteer and help in the community. See Volunteering in Your Area for more information.
Scroll to top