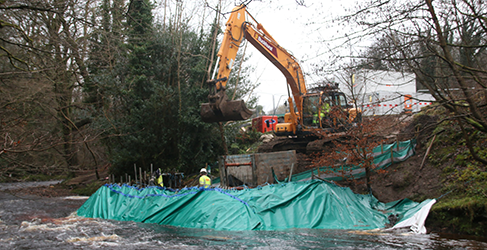 Video showing work on the Water of Leith 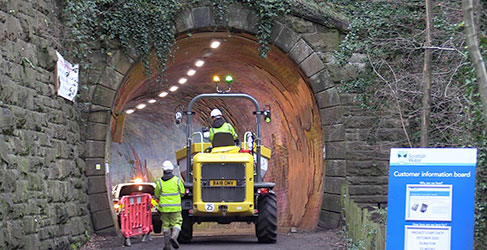 A donation from Scottish Water is helping with the completion of work on the Colinton Tunnel Community art project where local artist Chris Rutterford has created a 140m mural depicting Robert Louis Stevenson’s poem ‘A view from a railway carriage’.

The utility has donated £950 to pay for the use of a mobile cherry picker which will be used to carry out work at the site of the project at the Water of Leith to enable the completion of the mural.

Scottish Water is currently working on a project to help improve the environment in and around the Water of Leith. It has been working closely with the Colinton Tunnel team to ensure that work on both projects is able to be undertaken at the same time.

The utility has continued to liaise with the mural project team to ensure its upgrade of the waste water network in Colinton Dell would not impact on-going work to transform the old railway tunnel into a work of art.

When it learned people on the art project team were starting work on the final snagging on the work – including on the ceiling in the tunnel – and were looking to erect scaffolding Scottish Water stepped in to fund the cherry picker. It is much easier to move and will speed up this aspect of the work to finalise the artwork which has been carried out by Chris Rutterford, two specialist street artists and nearly 600 local schoolchildren over almost two years.

This project in the previously derelict tunnel is understood to be the first of its kind and is now the largest heritage mural in Scotland.

Mike Scott, Chairman of the Colinton Tunnel project said: ““Having raised almost £100,000 of money from local people and some generous organisations to create of this stunning artwork, we were initially very concerned about the challenges that we would face when Scottish Water’s contractors began work.

“We had two main concerns.  First, we expected frequent interruptions to our work so that vehicles could use the tunnel.  That worry was minimized when Scottish Water funded the cost of hiring a cherry picker. Our second concern was that some very large vehicles and plant would be passing through the tunnel so it was reassuring to have a good working relationship with their project team and to see the professionalism and care that they take when moving these large vehicles.”
Scottish Water is installing new and improved wastewater infrastructure to help prevent items which are wrongly flushed down the toilet – which include wipes, sanitary products and cotton wool - from overflowing into the river during severe storm events.

Its Water of Leith project is being delivered by Scottish Water alliance partner amey Black & Veatch (aBV). Site manager Colin Freeland, of aBV, said: “This area of the Water of Leith is very popular and is heavily used by walkers, cyclists, runners and horse riders and interest in the Colinton Tunnel project has increased footfall in the area by a significant amount.

“This has meant getting what we need to do fairly challenging; we want to keep access open for as many people as possible and cause as little disruption as possible whilst also ensuring current guidance on social distancing is observed. We have put signs in place to remind people to be considerate and to ensure everyone has space and people have been great at observing this.”

Work was due to start on the project to improve the environment in and around the Water of Leith in March but was delayed to COVID-19. Work eventually started in August with Scottish Water currently working in three locations along the Water of Leith at Juniper Green and in Colinton Dell.  We are due to be finished on these sites by Summer 2021.

Scottish Water’s is upgrading 14 existing underground Combined Sewer Overflow (CSO) chambers with new screens and all associated chambers, pipework and manholes.  A CSO is a chamber which acts as a relief point which discharges from the sewer network at times of heavy rainfall when the system can be overwhelmed with rainwater, these relief points are required to prevent flooding of the network.

Scott Fraser, Communities Manager at Scottish Water, said: “From the outset we were keen to cause as little disruption to this incredible art project and ensure people using the area where we were working had as much access as possible. We are delighted to be able to help the art team finish off the final aspects of work by funding this equipment to let them complete their snagging list.

"From a Railway Carriage" is illustrated in text on one wall of the tunnel, and links across the roof to other visuals on the opposite side which represent the rich heritage of authors, poets, painters and other individuals and organisations with links to Colinton throughout the years. The work, which cost £100,000, is becoming a major tourist attraction.