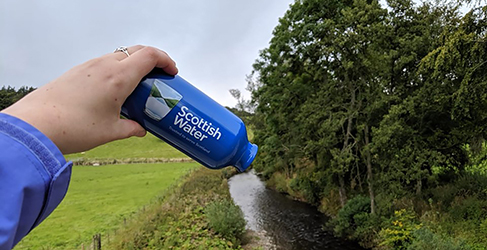 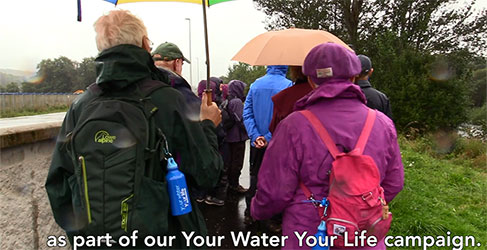 People who took part in the Scottish Borders Walking Festival helped put a campaign highlighting the benefits of topping up from the tap in the picture.

Walkers were urged to take photos that represented the phrase ‘Your Water Your Life’ – the name of the campaign being run by Scottish Water to urge people to carry reusable bottles and drink tap water to help the environment, save money and stay hydrated

Lots of walkers who took part in the week-long festival in the Selkirk area entered water-related images to the competition run by Scottish Borders Walking Festival Steering Group and Scottish Water.

The pictures, posted on the festival’s social media channels, were shortlisted and the final judging was carried out by local resident and former-Liberal Democrat leader Lord David Steel.

The winning image is by walker Rachael Disbury, of Hawick. She wins a scarf donated by Lochcarron Mill in Selkirk.

Commenting on why he picked the winner, Lord Steel said: “It really represents the phrase “Your Water Your Life” and I particularly like the humour in this one.”

The hundreds of people who took part in the festival – Scotland’s longest running festival now on its 25th outing – were urged by organisers to carry refillable bottles. Local businesses joined in by joining a “top up at the Tap” scheme to ensure free tap water was readily available throughout the town itself.

Scott Fraser, Communities Manager at Scottish Water, said: “More and more people are tapping in to the trend to carry reusable water bottles and filling them with tap water to stay hydrated on the go. It was great to team up with Scottish Borders Walking Festival to promote the benefits of tap water to the environment, your pocket and your health.

“The pictures the walkers took to highlight our campaign were brilliant – and showed just how vital water to everyone – and nature.

Sue Briggs, Chair of the Borders Walking Festival Steering group, said Scottish Water’s campaign was welcomed by walkers and people in Selkirk which has its own refill drive.

She said: “The reusable bottles which Scottish Water kindly donated were very popular - people absolutely loved them. A lot of people commented that they much prefer that they are metal bottles, opposed to plastic.

“Handing them out for this festival coincided really well with the refill initiative in the town where people can refill in any shop in Selkirk, so people have been going in and refilling their lovely new Scottish Water bottles.”
Scroll to top