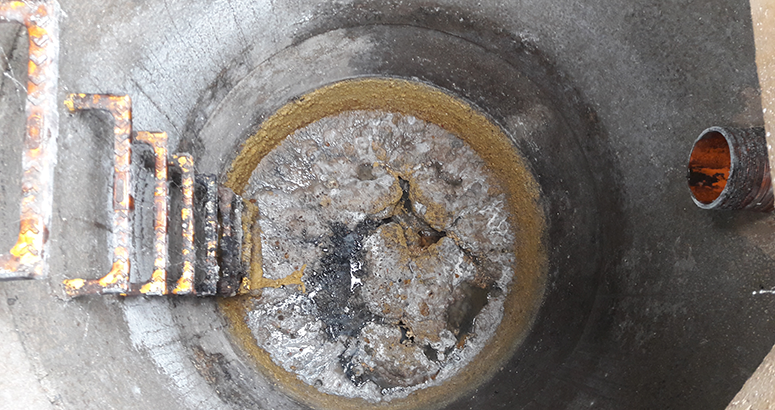 Following the recent launch of the FOGS scheme in St Andrews, businesses in Dundee and Cupar have signed up to ensure their fats, oils and grease are disposed of in the proper way

A number of restaurants, take-aways, hotels and cafes, are taking part in a pilot project to make sure they are disposing of fats, oils and grease (known as FOG) in the right way, by using fat trapping equipment.

If FOG is poured down sinks and drains it can form congealed lumps known as ‘fatbergs’ that block sewer pipes, leading to floods and environmental damage.

The work is part of Scottish Water’s campaign to substantially reduce sewer blockages in these areas. The pilot project began in St Andrews in September where all food service establishments have been visited to make sure they have the right equipment in kitchens to prevent FOG getting into the sewer.

The project has now been extended to include businesses in City Quay in Dundee and to include St Catherine Street, Crossgate and Bonnygate in Cupar.

Gordon Douglas, regional facilities manager for Savills, which manages City Quay, got involved in the campaign by sending letters to his tenants, urging them to make sure they were FOG compliant.

He said: “City Quay is a beautiful development and as responsible business owners we’ve got a big part to play to help protect it. The quay is home to a number of eateries from grills to Chinese buffets. We want to help make sure all our tenants install correctly sized grease trapping equipment.”

Network protection officers from Environmental Compliance and Services (ECAS) have been visiting food businesses on behalf of Scottish Water. They perform audits of the premises and provide recommendations on what fat-trapping equipment should be used

ECAS Operations Director, Robert Lynch said: “It’s a busy time of year for food service establishments, so we’re happy to be able to help them out. Most of the time that simply means making sure they’ve got suitable grease traps in place.

“We’ve found that some food outlets don’t have any means of disposing of FOG in the right way – whereas others need to upgrade what they’ve got. Education is key, that’s why we approach people like Gordon, to galvanise as many people as we can to get the message across.”

The Dragon Horse Chinese take-away in Cupar’s Bonnygate is one of the food businesses which has been visited by ECAS - and the managers are now in the process of ordering new grease trapping equipment as a result.

Matthew Ng, of The Dragon Horse, : “This campaign has given us a better understanding of what we need to do, to make sure all our fats, oils and grease is carefully disposed of. We’re happy to support the campaign and would encourage other businesses to do the same.”

Scottish Water deals with 37,000 blockages every year, costing them £6.5 million to resolve.

Scottish Water’s, Alex Milligan, a Trade Effluent Advisor at Scottish Water, said: “For most people, it’s the new year that signals the time for detoxing and cleansing. But not for some of these food outlets in Dundee and Cupar – they’ve started early. With their help, we’ll hopefully prevent around 55 tonnes of FOG from reaching our network. That would be a great way to start 2019.”