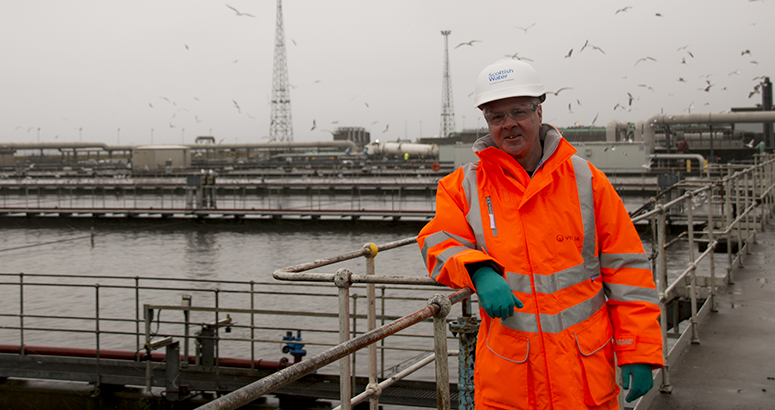 The site is one of the most modern and environmentally-friendly of its kind using a Combined Heat and Power plant and Thermal Hydrolysis to generate electricity and treat the waste for agricultural use.

Over the last four decades it has been transformed from a much smaller site - which treated and separated waste water from untreated sewage disposed of in the Forth via the MV Gardyloo ship.

And no-one knows more about the changes at the site better than Ian Carnevale who has worked at Seafield since before its opening in April 1978.

Ian, 62, said: “We had to deal with a lot of unpleasant things back in the beginning, like pulling dead birds, vermin and even dogs out when they got caught in the screens with the bricks, stones and chuckies.

“Our safety equipment was more or less hard hats, boots and gloves so we had to be careful as we got a lot of cuts and grazes and used to be given regular injections due to the type of stuff we were handling.

“Working and loading the Gardyloo was hard work which was particularly foul in the summer as we did the loading from the dock side and then had to clean out our tanks by hand. But we knew the job had to be done and was benefitting the whole city.”

In the early 1960’s it was clear Edinburgh’s ageing sewer network which still relied on large parts of infrastructure built by the Victorians was not fit for a growing modern capital city.

In 1966 feasibility studies were carried out by the then Edinburgh Corporation for a new sewage disposal scheme. The decision was taken to build Scotland’s largest waste water treatment works from reclaimed land at Seafield in Leith.

Two new interceptor sewers connecting Edinburgh and its outskirts were also built to carry the city’s waste water for treatment at the new works.

In February 1978, Ian – then aged 22 - joined Lothian Regional Council and began working at Seafield ahead of its official opening. He began as one of five Day Operators. There were ten staff in total in what was then only a primary treatment works.

Ian, of Dalkeith, said: “When we first started everyone was feeling their way as to what the best processes should be. Our main role was to take grit, rags, and solid waste out from the liquid which was then piped straight into the Forth.

“At the beginning they didn’t even know how much solid waste we’d have and how many sails they’d need from the Gardyloo whether it was going to be two or three a day or a week."

After a month the Council realised they needed a shift system in place and Ian moved to work in a three man team as a Process Operator. The Process Controller Les Davis known as Taffy took him under his wing.

Ian said: “Taffy taught me a lot but most of my memories of him relate to gardening. Back then the site was a lot smaller, and there were flowerbeds instead of grass.

Taffy made sure we looked after our section of flowerbeds. He took great pride in his roses and tending to the flowers was definitely one of the more pleasurable sides of the job.”

In 1984, When Taffy retired Ian was promoted into his role as Process Controller where he stayed for 15 years until the Private Finance Initiative (PFI) of Stirling Water and Veolia took over running Seafield from East of Scotland Water. By then the Gardyloo had been taken out of service, the site expanded to 20 acres and serving 800,000 people across Edinburgh and the Lothians.

Ian, a father-of-one, said: “Over the years the technology has changed completely, it’s like night and day. It’s a lot more technical now due to the amount of investment we’ve had.”

Since 2011 Scottish Water and Veolia have invested £34 million into Seafield, installing new equipment to improve odour as well as a thermal hydrolysis plant which treats and pasteurises the raw sewage, generating biogas energy which provides 85% of Seafield’s electricity. The sewage is then turned into sludge cake and sold to farmers as organic fertiliser. This process makes it one of the greenest waste water treatment plants in the UK.

The plant is capable of producing up to 2300 kilowatts of sustainable electricity. Offset, this is enough to power up to 600 homes. This is produced by gas powered generators which use the gas produced in the 6 digesters on site to generate this ‘green’ power.

A multi-million pounds Odour Improvement Plan was completed six years ago and the facility is now continually monitored for any potential odour issues. The works has a strict monitoring regime overseen by a number of environmental regulators.

Local community groups and politicians attend regular stakeholder meetings with staff from Scottish Water and Veolia where they are updated on developments at the site.

Of his forty years’ service Ian feels the job has provided him with a number of advantages. He said: “This job keeps you fit, it’s one of the reasons I keep on going. As opposed to going to the gym you’re as well coming to your work, climbing up ladders and climbing up steps and moving about.

“When I first started you had to retire at 60 and that was it. So now I have the advantages of being allowed to stay in work as long as I want to continue on.”

He also takes pride in his job providing an important service to the people of Edinburgh and the Lothians and says he feels a personal responsibility to keep the odours down.

He said: “One of the biggest problems we had back then was rags getting in and clogging up the system and today it’s wipes, so it’s different material causing the same problem 40 years on.

"The public can play their part, by being careful what goes down the loo, and not things like wipes, sanitary product, cotton buds and stuff like food waste and fats and oils.”

And asked what had surprised him the most he said: “I’d never have expected a major fast food outlet like McDonalds to open up opposite a sewage treatment works. I think that proves Seafield is very much part of the fabric of the city and here to stay.”

A Veolia spokesman said: “The challenge for the next decade will be to move towards energy self-sufficiency, cut carbon and exploit all the opportunities for customer-controlled energy. Harnessing the potential of seven million tonnes of human waste each year will become a vital strategy to meeting these challenges.

A Scottish Water spokeswoman said: “Seafield has played a crucial role to the Capital for the last 40 years and will continue to do so as the city expands.

“This milestone anniversary comes as we look to shape the future of Scotland’s drinking and waste water with the launch of our consultation to address the key challenges and opportunities facing Scotland’s water industry in the decades to come.

"We are also preparing plans to ensure we can provide a continuous supply of high-quality drinking water, protect and enhance the environment, support Scotland’s economy and communities and invest in future water services.”
Scroll to top