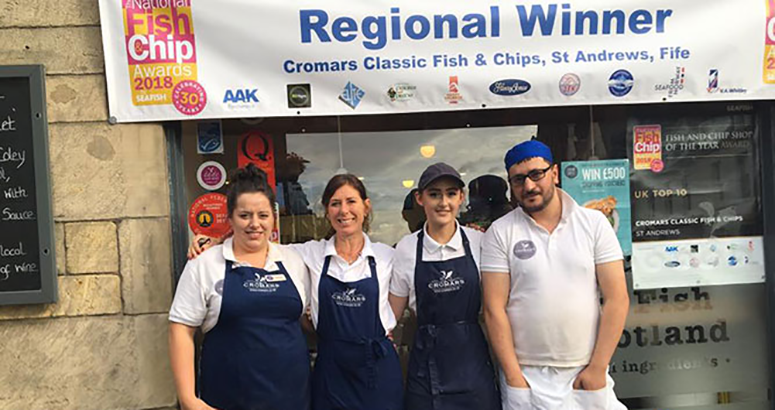 Cromars in St Andrews is backing our campaign which highlights how to safely dispose of fats, oils and grease.

An award-winning St Andrews fish and chip shop has become an official champion of Scottish Water’s campaign to free sewers of fatbergs.

Cromars is backing the six-month project to encourage businesses which serve food to properly dispose of fats, oils and grease (commonly known as FOG).

And to mark the occasion it has added a special fat-free fish dish to its menu today - St Andrew’s Day.

Network protection officers from Environmental Compliance & Services (ECAS) are working with Scottish Water on the campaign which launched in September.

They inspected kitchens and offered staff advice on any measures needed to improve how the businesses dispose of FOG. This has included fitting grease traps, water filters and making sure grease is wiped from plates and cutlery before they are washed. Only six businesses had fitted grease traps, something which all businesses regularly using FOG should fit. Of these, only one business – Cromar’s – was using one which was the right size.

They found Cromars had also installed a system which takes the waste from potato peelings and separates the waste skin and compacts the potato starch for easier recycling - and it has to prepare a staggering 500kg of potatoes a day on its busiest days. It also used solids strainers on its kitchen sinks to prevent food waste and FOG going down the drain.

Wendy Frame, owner of Cromars, said: “When we heard about the campaign we thought it was a great idea. We already had a number of measures in place and it was good to hear we were doing the right thing.

“Cromars opened in 2013 but more than 35 years earlier the landlord put in a huge grease trap in this building, so that was already there. He was obviously streets ahead of the game as we have been told most premises still don’t have these traps. Although we had it, we have been told as it should be cleaned out more regularly, once a month, and from now on we will make sure that is done.”

Staff at the fish and chip shop – current holders of ‘Scotland’s Fish and Chip Shop of the Year’ in the Seafish awards – also told how customers were becoming more conscious of the environment and how some asked what they did with their food waste.

Wendy said: “Everyone is much more aware of the environment these days and as a business we know we have a duty to protect it. As well as locals who live and work here, many of our customers are tourists, who come to this beautiful coastal town to visit the beaches and golf courses and historic streets - so we need to look after them.

“This campaign has made me much more aware of what is under the ground – and got me thinking of fatbergs in the sewer and the amount of damage they can cause from flooding our streets and buildings to polluting our beaches.

“That is why we are delighted to back this campaign. Just because it is out of sight we can’t take it for granted.

“To celebrate us becoming Scottish Water’s first FOG Champion and the fact it is St Andrew’s Day we are serving up a fat free fish – grilled hake with a special whisky-dressed salad. And £1 from every sale will go to charity, to the Royal National Lifeboat Institution.”

Scottish Water teams attend an average 95 sewer blockages across Scotland every day – at a cost of £6.5 million a year. More than half of the blockages are caused by FOG being disposed of incorrectly down drains and sinks.

It is estimated around 140 tonnes of FOG – the equivalent of 280,000 fish suppers - will be prevented from being discharged into St Andrews sewers in the first year of this campaign.

Robert Lynch, Operations Director at ECAS, said: “We know for some food businesses that sticking to regulations on how to get rid of FOG properly isn’t always a priority and can be seen as an unnecessary overhead. But, we’ve found most businesses in St Andrews have really got behind this campaign and really care about their environment. They have shown a willingness to take measures to protect the environment. In most cases that means fitting the right sized grease trap.”

“When we tell them about the damage FOG can cause to the sewers – and we have shown them pictures of FOG build up here in St Andrews’ – most are shocked. Some realise how they may have been contributing to the problem by putting FOG down drains and sinks.

“One challenge we tend find is we educate staff, but when we return, those staff are away and new one are there – it’s the nature of the food service industry. So, this is very much about ongoing work to make sure everyone is supported in knowing what to do and what measures need to be taken.”

“We are confident by the end of this campaign businesses will have the right sized grease traps in place.”

Images recently taken from sewers in St Andrews show parts of the network covered in FOG and in many places fatbergs had been created. Specialist equipment will be used to remove the build-up next month.. It is hoped this campaign will prevent the sewers getting swamped with FOG again.

Mike Will, Waste Water Operations General Manager at Scottish Water, said: “It is heartening our campaign has been so well received in St Andrews and that businesses are listening and taking action to better dispose of FOG. If successful, there are already plans for this to be rolled out to other parts of the country – where drains could also be put on a diet.”

Scottish Water maintains over 30,000 miles of sewer pipes which take waste water away from homes and business premises across Scotland. It then treats this at over 1,800 waste water treatment works before returning it to the environment.

It is an offence under the Sewerage (Scotland) Act 1968 to interfere with the free flow of the sewers – fat, oil and grease do this when they congeal.

For more information on FOG visit our Water Efficiency pages.