Our £17m investment project in Paisley’s waste water infrastructure has made it to the finals of this year’s New Civil Engineer Tunnelling Festival Awards – awards which recognise excellence in the tunnelling industry.

The tunnelling project to help improve the water quality and natural environment in the Espedair Burn and White Cart Water, and tackle flooding in the Paisley area has been shortlisted in two categories for the 2019 awards; Tunnelling Project of the Year (project value up to $50 million) and Community Engagement Project of the Year.

Completed in June 2019, this major engineering project involved the construction of a one mile–long sewer under the streets of Paisley. 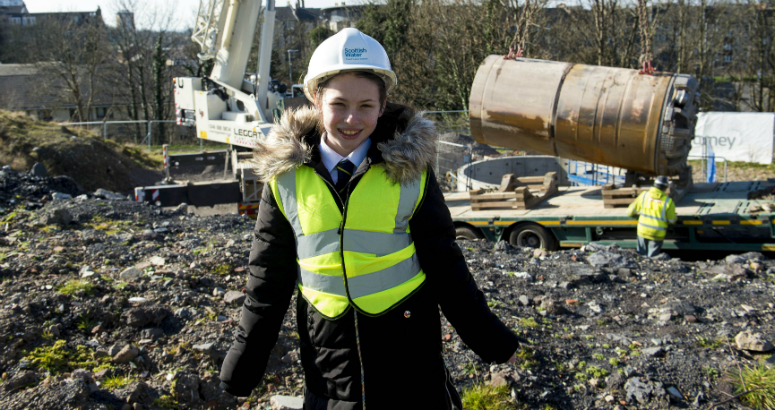 Watch our overview video of this £17m investment project in Paisley.

“We can’t thank Scottish Water enough! They’ve been a fantastic organisation for the school to work in partnership with... ”

The importance of working with local communities and understanding community needs was something which was very high on the agenda for the project team in Paisley who knew that working together with the local community and listening to their needs would ensure successful project delivery. Brian Boland, project manager for Scottish Water, said: “We’re absolutely delighted to have been shortlisted for these awards – it’s great for the hard work of the project team to be recognised so we’ll keep our fingers crossed for success!”
“This work was undertaken in a busy, urban environment and while the route of the sewer tunnel was chosen to minimise disruption for local residents, road users and businesses, some disruption was unavoidable. Some of the roadworks in place during the project meant that we simply couldn’t avoid disruption for pupils and families on the school run to the local primary school, St Charles Primary, and so it became a key focus for our community engagement work. Volunteers from our project team gave their time to carry out activities to help improve the visual appearance of the school playground and the school environment. It’s been great to leave a legacy and help make a difference for local people.”
The project team took time out of their busy schedules to meet with the school teachers and children, explaining the project to them to ensure they were fully engaged throughout. A special relationship was formed with the school and continued during the entire project delivery.
Depute Head Teacher, Judith Kirk said: “We can’t thank Scottish Water enough! They’ve been a fantastic organisation for the school to work in partnership with and the personal approach taken by the project team has been great. The playground looks fantastic after all of the improvements which have been made and the children are amazed at the difference. We feel very lucky to have been involved with Scottish Water and appreciate everything Brian Boland and his team have done for us.”
Just some of the activities the team undertook for the school included building and installing raised plant beds so that the pupils can get involved in gardening, painting, installing welly pallets made out of recycled pallets – a place for the kids to keep their welly boots, repairing concrete steps in the playground, and upgrading the school’s adventure playground for the pupils to enjoy. A competition run in conjunction with the school led to the naming of one of the Tunnel Boring Machines on the project – “Tunnelling Tanya”.
The New Civil Engineer Tunnelling Festival 2019 award winners will be announced in December.
Scroll to top