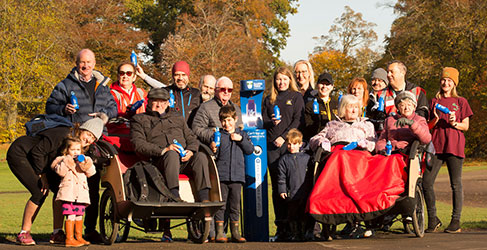 Watch the launch film from the day 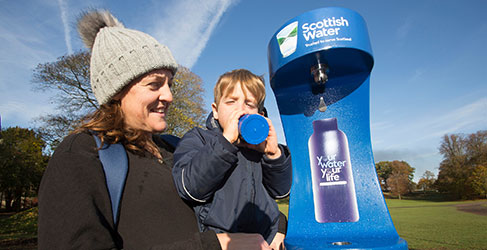 Mum Rachel and Lauchlan enjoy topping up from the new tap

Falkirk has become home to Scottish Water’s first ever refill tap in a park - making it easier for more people to stay hydrated while on the go.

The new Top Up Tap has begun operating in 170-acre Callendar Park where plenty of walkers, joggers, dog owners and families pass every day. The Park has a long history dating back to Roman times and the construction of the Antonine Wall in 142AD.

The high tech tap, which tracks water usage and records cost savings, is part of Scottish Water’s national initiative to get more people to carry a reusable bottle. The utility’s Your Water Your Life campaign encourages people to drink tap water on the go stay hydrated, save money and protect the planet by reducing waste.

The blue tap is on the mound near Callendar House, near a well-known landmark Norway Maple which is said to mark the site of a burial ground of soldiers who died in a civil war against Oliver Cromwell.

A number of groups which regularly use the park – including people from running group Falkirk Victoria Harriers and staff and users from Cycling Without Age and Under The Trees - helped officially launch the new tap.

Paul Finnie, Sport and Recreation Manage at Falkirk Community Trust said: “We are delighted Scottish Water has chosen Callendar Park as a location for their Top Up Tap which we know our park users will get a real benefit from. We are all trying to reduce the impact of single use plastics and this innovation will not only improve the facilities on offer for customers but also help protect our environment”

He said a range of people and groups regularly use the popular park - which was recently refurbished to highlight the Roman heritage of the area - including the refurbishment of the main play area to reflect the Roman Heritage of the park.

John McNally, MP for Falkirk, also welcomed the tap saying. He said: “This new water tap not only stops people relying on single use plastic by refilling their own containers but it also encourages them to drink more water. Now families out for the day with their children, as well as joggers and dog walkers will have easy access to fresh, Scottish drinking water.

“This is a great asset for the area and is part of a wider scheme to offer water refill taps across the country. It is a hugely positive step for both the environment and public health.”

Cllr Paul Garner, Falkirk Council’s spokesperson for the Environment, said: “Scotland has always had high quality drinking water that allows everyone to enjoy this great natural resource wherever they are. The tap in Callendar Park will ensure that local residents and visitors alike have access 24/7 to this free facility.”

The latest tap is the 15th top up tap to be installed by Scottish Water.

Also at the launch were members of the charity Kidney Kids Scotland, which supports children with renal and urological conditions and their families. The charity’s manager Karen McFarlane, said: “The Your Water your Life campaign is a wonderful initiative, We are encouraging each Scottish child to drink at least one refilled bottle of tap water throughout their school day. We encourage parents, grandparents, carers, teachers and all child role models to get on board with this campaign.”

Since the first refill tap was launched in Edinburgh last October more than 40,000 litres of water has been drunk from Scottish Water’s expanding collection of Top Up Taps. This is the equivalent of 120,000 standard 330ml single-use plastic bottles.

Scott Fraser, Communities Manager at Scottish Water, said: “This is the latest milestone in our commitment to roll out a network of Top Up Taps. We are delighted to unveil our first tap outwith a high street to help the many and varied range of visitors to beautiful Callender Park stay hydrated with free, fresh drinking water while they are out and about.

Scottish Water plans to have a total of 70 refill points – at least one in every council area – within the next 18 months. Each refill point gives access to free, fresh and clean drinking water at the push of a button. They are connected to the mains water supply and are inspected regularly.

A Scotland-wide study found almost two-thirds of people now carry a refillable water bottle with them at least some of the time.