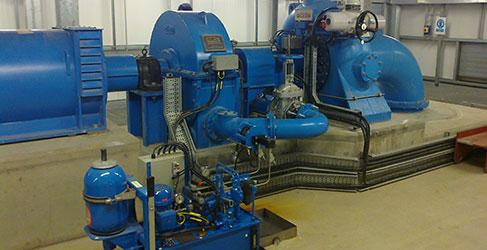 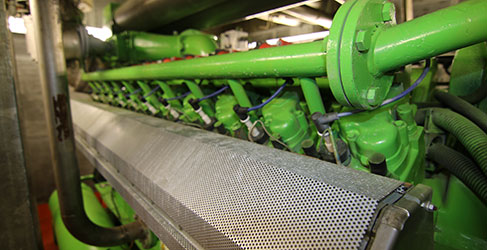 Combined heat and power at Nigg

Scottish Water Group increased its renewable energy by 12 per cent in the last year with a growing number of its water and waste water treatment works self-generating more than ever.

Just under half of this – 25 GWh – supplied renewable power to 73 of our own sites located across Scotland. The rest was exported back to the national grid.

Fraser Purves, energy manager at Scottish Water, said: “With the many water and waste water assets we operate across Scotland we are one of the biggest users of electricity and we are continuing to harness new ways to reduce our reliance on grid power to make us greener and reduce operating costs.

“More and more of our infrastructure is providing various opportunities to deliver our service in a more sustainable way. To increase our renewable generation for the fifth year in a row demonstrates our commitment to operate in a greener manner – and puts us on course to reach our ambitious longer term energy targets."

One of the sites which help reach the latest milestone was Nigg Waste Water Treatment Works near Aberdeen. Scottish Water took over the running of the site from a previous PFI-partner in December 2018. The site has a 2MW Combined Heat and Power (CHP) which underwent a major overhaul in 2019, with a major clean of a digester at the site. This has increased the volume and quality of gas produced, and the site produced 6.8 GWh of renewable electricity in 19/20 - up from 2.6 GWh in 18/19.

Another site which performed well last year was Turret Water Treatment Works which serves parts of Perthshire, Stirlingshire, Falkirk and Clackmannanshire. It has the biggest renewable capacity of all Scottish Water’s sites. It has three hydro turbines which generated a total of 9.8 GWh last year – enough to power 3161 homes.

A major expansion of small-medium scale wind turbines and Solar Photovoltaic (PV) power also helped generate renewable energy at assets. Since 2015/16 there has been an increase of 12.19 GWh generated by these types of assets. This is a huge rise from 2015/16 when the amount was 0.4 GWh and up on last year’s 4.4GWh.

On top of this, in the last year Scottish Water Horizons, the business arm of Scottish Water, launched four new PV schemes at sites across the country at Assynt, Camphill, Glenconvinth and Dunfermline.

So far this year Scottish Water Horizons has installed a new ground-mounted PV scheme at Glassford’s service reservoir near Hamilton. By next April it will also have new schemes at Finmont service reservoir in Fife and at Inverness Water Treatment Works (WTW). Combined these have the capacity to generate almost 1 GWh.

Donald MacBrayne, business development and delivery manager at Scottish Water Horizons, said: “In recent years we have significantly stepped up our work to invest in renewable technologies and have made a significant contribution to Scottish Water’s renewable programme.

“One example of this is the rise in the shape and pace of PV schemes now in operation. In the last five years we have installed 27 systems across Scotland, from Assynt WTW in Sutherland - the most northerly - to Glengap WTW in Castle Douglas - the most southern.

“Looking forward we will significantly increase our activity to help us achieve the Scottish Water Horizons  target of 90GWh of new low carbon generation by 2030.”

Scottish Water is one of the biggest users of electricity in the country and consumes about 440 GWh per year of grid electricity at its sites. It committed to becoming net zero by 2040, five years ahead of the national milestone.

The utility aims to lead the way in delivering a sustainable Scotland. As well as working to lower its carbon footprint it aims to increase resource efficiency, adapt to climate change and be socially sustainable in all its work.