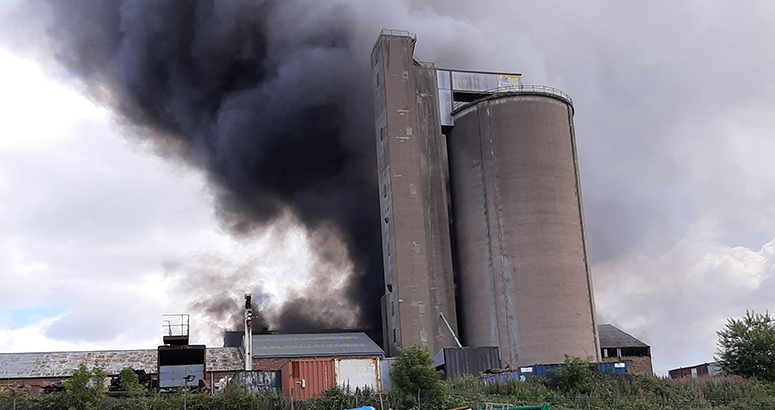 “"This is a great example of close partnership working and quick thinking, resulting in an unusual solution that helped us extinguish this challenging fire.”

The Scottish Fire and Rescue Service was called to a fire at a waste transfer station situated 200 metres from Scottish Water’s Cupar Waste Water Treatment Works.

Nine crews were tackling the blaze when they were told they could hook their fire hoses to the outlet pipes at the works.

This saw them use treated waste water to tackle the fire. Once used it then flowed to a nearby Scottish Water pumping station, and then back to the WwTW where it had originally come from before being reused over and over again until the fire was eventually put out several hours later.

Innes Petrie, Scottish Water’s Sewer Response Team Leader, said: “This really did give new meaning to circular innovation – in my 33 years in the water industry I have never heard of waste water which has been through the full treatment process being used to fight a fire and then to return to same works and used again the same way. It meant the same water was being used over and over again.

“Fire crews obviously look for water quickly from the nearest sources when looking to put out fires. When they turned up at our site we did a bit of ‘outside the box thinking’ to assist and were delighted to be able to help out.”

Scottish Water staff monitored where the water used by the fire teams was flowing to in order to ensure it did not go into the nearby River Eden.

Site operator at the works, Dougie Hain, also made sure his innovative fire solution did not have any negative impact to the works and that they remained operating as they should.

Mr Petrie said: “This really was all down to Dougie’s fantastic bit of quick thinking. When the fire crews said they needed more water than was available at the hydrants he came up with this circular solution which worked great, keeping the River Eden environment safe and recycling water on site as well.”

The waste transfer station where the fire broke out is used for the temporary disposal of all sorts of waste.

He said: "We always look to work closely with our partners to bring an incident to a swift and safe conclusion, and this can result in some truly innovative and unique solutions to problems on the incident ground.

"This is a great example of this close partnership working and quick thinking, resulting in an unusual solution that helped us extinguish this challenging fire.

"My thanks must go to Scottish Water and all of our partners for their support throughout this incident and to our crews for their diligent efforts."
Scroll to top