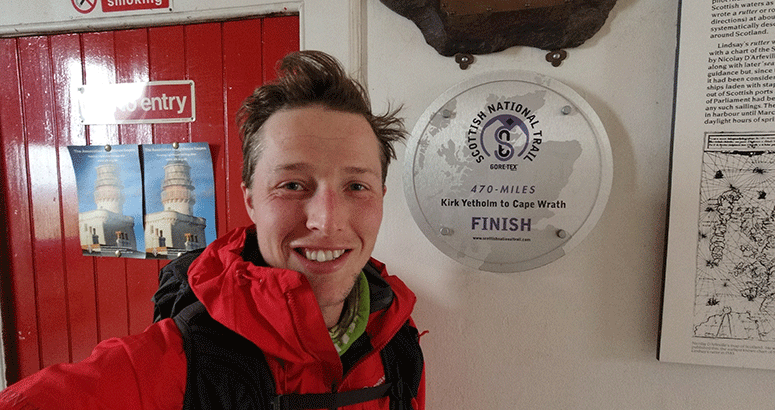 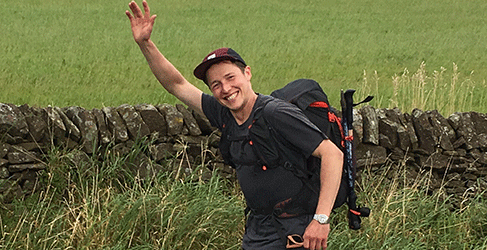 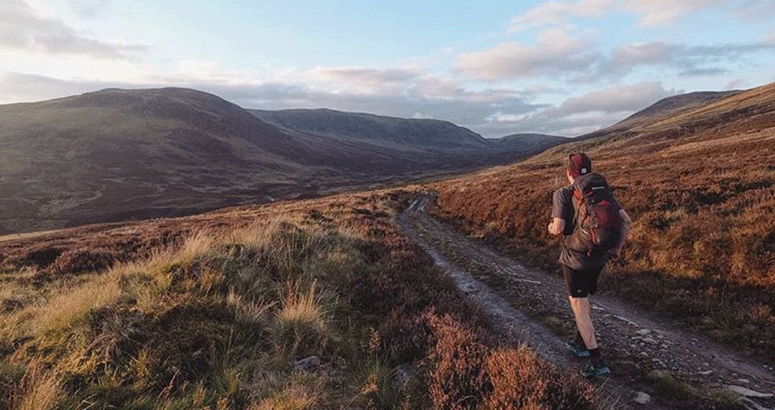 Scottish Water fundraiser Matthew Girvan has broken the record for the fastest time to complete the 864km Scottish National Trail.

Matthew, a mechanical engineer, shaved four days off the previous record to complete the trail in just under 14 days - with the renowned mountaineer who designed it, Cameron McNeish, describing his achievement as “amazing”.

He walked and ran an average of 62km a day on the gruelling challenge which he did without any support, with only his mobile phone for navigation and contact with his family and friends.

As well as battling the elements on his record-breaking adventure and hiking on some of the country’s toughest terrain Matt saved a sheep which had become caught in a cattle grid, celebrated his 29th birthday with a bowl of soup (what was his first hotfoot in days) and was once so tired he thought he was hallucinating.

“It feels amazing to have done it and it made me think how, if this nerdy asthmatic can do this, then no-one has to have limits put on them.”

Matthew said: “My goal was to do the trail in 15 days and I gave myself a 50-50 chance of pulling it off. From the start I gave it my all, knowing I’d be more likely to crash and burn going quickly than to do it in longer than the previous record of 18 days.

“I’d make early starts, up at 5am, and would walk until 8pm or so. Being up against the clock I only ever had short breaks in the day. People keep asking what kept me going, and a big part of it was knowing that I had an army of supporters back home who believed in me, but at a basic level, it was all about sticking to my scheduled mileage, taking one day at a time. Walking through beautiful sunsets on warm, clear nights through remote glens with only roaring stags to share them with definitely kept my spirits up.

“It feels amazing to have done it and it made me think how if this nerdy asthmatic can do this then no-one has to have limits put on them. If you really want something, go for it. I decided to do this after my travel plans were scuppered due to Covid and started training during lockdown. This gave me a goal to work towards and to have pulled it off feels pretty awesome.”

The demanding trail winds its way from Kirk Yetholm near the English border, through the Borders, Central Belt, Cairngorms, and the remote far north-west before finishing at Cape Wrath. Matt wild camped most nights and walked with a 7kg back pack – with a tent, sleeping bag, clothing, navigational equipment, and minimum food and water for each section between top-ups in villages along the way.

Matthew, who lives in Edinburgh where he regularly trains in the Blackford and Braid Hills, said: “The further north I went the more remote the shops and facilities became. Having to ration my digestives for lunch was hard, and I really wasn’t taking in enough energy towards the end. I was so lucky not to ever have to buy water, I mostly topped up from streams.

“It was such a great way to see remote parts of Scotland. I had read about the Trail and it seemed like a brilliant way for me to get a snapshot of many different iconic Scottish landscapes in one trip. But it normally takes 5-7 weeks and I couldn't take that much time off work – that’s why I started to think about going for the record.”

Matt kicked off at Kirk Yetholm in the Scottish Borders

A welcome break to top up from the tap at Linlithgow

Matthew, originally from New Zealand, said the hardest part of his hike was getting up so early and getting going but says once he started “it was never as bad as I feared”. Most days he walked in silence, or sang to himself, as he chose not to listen to music on his phone wanting to preserve the battery.

He admits there were “a few occasions” he took a wrong turn and how he has since learned some of his friends who were tracking his GPS route had noticed but could not get in touch with him as he had no phone signal.

One of his highlights was when a woman he did not know stopped him while he was passing through Callander and wished him luck after reading about his record attempt on social media. And he says he will never forget rescuing the sheep whose all four legs had fallen through a cattle grid near Glen Almond.

He said: “It was pretty hefty and had big horns. But I managed to calm it enough to be able to lift it a few stumbling steps to safety.”

“It was meant to take five weeks. I never in my wildest dreams thought someone would backpack the route in just a fortnight.”

And when he finally reached Cape Wrath just after 1am on September 25 – exactly 13 days, 19 hours and 35 minutes since leaving the other end of Scotland – he enjoyed sleeping inside the small visitor centre there before hiking another five hours back to Kinlochbervie where he went to a bed and breakfast for a cup of tea and a pint admitting: “Neither have ever tasted so good”.

Along with setting a record Matthew aimed to raise £1 for every 1km he covered for WaterAid Scotland. He has already raised almost £4,000 for the charity which provides safe water facilities in some of the poorest areas in the world and is the official charity of Scottish Water.

Matthew said: “I have come to know about their amazing work through Scottish Water's partnership with them. Their focus on hygiene seemed particularly important in the current pandemic and the importance of finding clean drinking water was a big focus on my trip so it seemed an appropriate thing to do.”

Cameron McNeish said when he first put the trail together, by linking lots of trails and byways into one long trail that ran the length of Scotland, it took him five weeks.

He said: “I never in my wildest dreams thought someone would backpack the route in just a fortnight. Congratulations to Matthew but what is more important than records is that he seems to have thoroughly enjoyed the experience.”

This was not the first physical challenge Matthew did this year. In summer he completed the Bob Graham Round in the Lake District when he climbed 42 peaks over a 106 km route in less than 24 hours.

Matthew says he is now taking “a wee break” to rest his body and catch up on sleep. He is already thinking about his next running adventure, but admits “it will be nothing as ambitious as this one, this was once in a lifetime”.

We’re proud to work with our chosen charity Wateraid, helping some of the world’s poorest communities 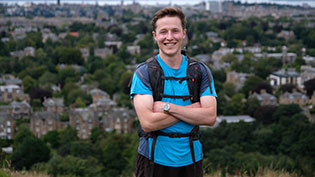