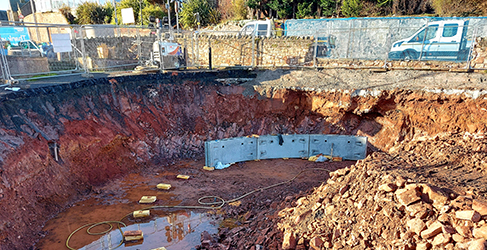 Good progess is being made on this £3.2 million investment 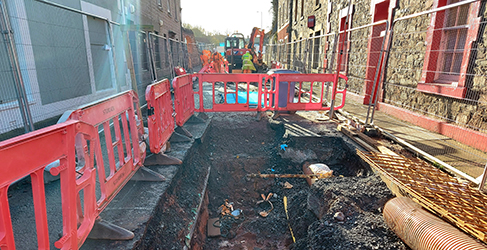 Scottish Water has completed a third of its work on its project to improve the wastewater infrastructure protect against flooding in Eyemouth.

The project will increase the capacity of the sewer network to better protect properties and streets from external and internal flooding.

To date 70 of the 130 metres of pipes to be installed have been laid in the town’s Church Street.

The upsized pipes and new underground storm water storage tank being built in the nearby public car park will give the local network more than ten times the storage capacity it had before.

Work has begun laying the foundations of the storage tank which will be seven metres deep and 10.5 metres diameter and a total of 300 cubic metres – enough to store more than 300,000 litres of surface water at times of heavy rainfall, which is happening more often due to climate change.

Work on the £3.2 million investment was due to start in March but was postponed due to the Covid-19 lockdown and resumed in autumn. It is due to be completed in late spring.

Scott Fraser, Communities Manager at Scottish Water, said: “Sewer flooding causes a great deal of distress for householders and it also has a detrimental effect on the local environment. This work should significantly reduce the risk of future sewer flooding in Eyemouth.”

A small number of properties in the town have experienced internal flooding at times of heavy rainfall, which can overwhelm the sewer network.

Billy Grant, 80, was one of the street’s residents who told how he had to lay sandbags outside his and other peoples’ homes when there was prolonged or heavy rain.

The former fisherman, who has lived in the same home on Church Street all his life, said: “When it rains lots I would put on my waterproofs and get out and stack up sandbags and put boards outside to stop water getting in my house, and some of my neighbours’.

“It must have been bad at least 15 times or so in the last few years. There was often half a foot of water outside my door, that had come up from the road and over the pavement.

Mr Grant, who is also vice chair of Eyemouth Community Council, added: “We are very happy this issue is being sorted. Scottish Water has been very good at letting us know what is happening and when and where and the people on site are very good and helpful. It also means we can leave our homes and go away on holiday or so and not be worried about being flooded.”

The project is being delivered by Scottish Water’s alliance partner amey Black& Veatch (aBV). Site manager Max Turnbull, of aBV, said: “We are a third of the way through the work and when we can we plan opening up parts of the road we have completed to let people living in this busy street get better access to their homes.

“We are working very near to many homes in this confined street and very much appreciate peoples’ patience and understanding while we carry out this essential work.”