Scottish Water and Kinloch Rannoch in Fight Against Fats, Oils and Grease

H2o-To-Go is a Winning Formula at Glasgow Science Centre 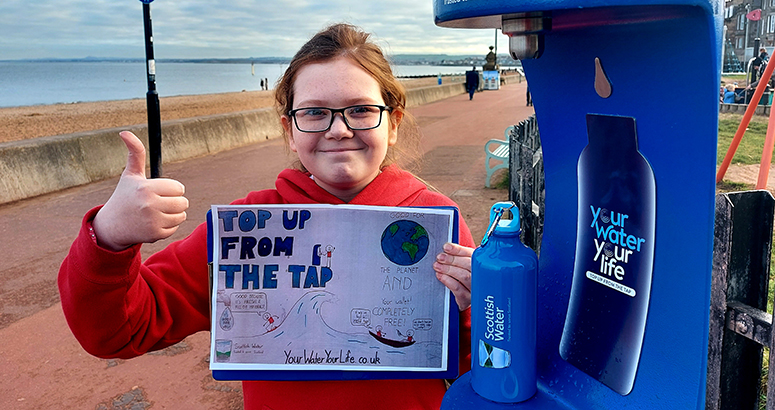 Presenter Gail Porter has urged people in her home city to top up from the tap to help look after their health and the planet at the launch of a new refill tap.

Scottish Water has installed the new top up tap in Portobello, not far from where the star grew up. It will let people refill water bottles and stay hydrated when out and about.

Gail had hoped to make the launch in person but due to ongoing Covid regulations she has to stay   in London where she now lives. The ex-Portobello High School pupils said one of the biggest things she missed abut home was the “lovely water”.

The 49-year-old said “I’m gutted I can’t be at the launch of this new water refill tap. As a very proud Porty lass and a big believer in all of us doing what we can to look after ourselves and our planet I so wanted to be there. These refill taps are a brilliant idea to help reduce plastic waste and make it easier for folk to top up with water, which most of us – including me – know we need to drink more of.

“I’m sure people who live, work and visit wonderful Portobello will put this refill tap to good use. I can’t wait to try out the tap when I am next home – as I truly miss the taste of Scottish water. In the meantime I have a lovely reusable Scottish Water bottle which reminds me of home and I am now taking out and about on the go with me.”

The tap, situated near the children’s play area on the Promenade, is the third tap to be launched in the Capital. Scottish Water’s first refill tap was unveiled outside the Scottish Parliament two years ago and in September another was unveiled in Leith Links.The bright blue taps are part of a nationwide campaign - Your Water Your Life - by Scottish Water which aims to get more people to carry a reusable bottle.

Local primary children took part in a competition to design a poster promoting the new refill point and urging people to top up from the tap. The winning design was created by 10-year-old Mairi Melvin, a P6 pupil at Towerbank Primary School. Her poster shows surfers out at sea running out of drinking water with the message that tap water is fresh and good for you. It will go on display in Portobello next month.

Mairi said: “I was so surprised, and so happy, to win. I really like art and loved doing the poster. I thought about water and where we are and thought I would add surfers as well as the message about how tap water is good for the planet and you can get it for free from this new refill tap.” 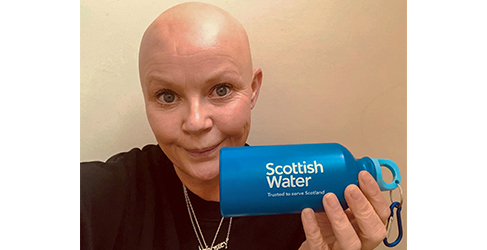 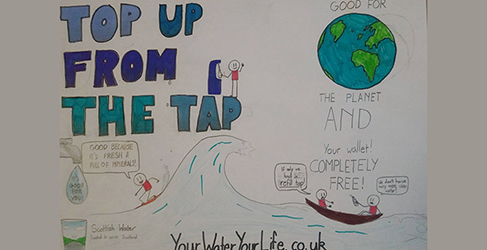 All Scottish Water’s refill taps digitally track water usage and record cost savings. To date more than 82,000 litres of water have been dispensed at the touch of a button at all 29 TUTs installed across Scotland. This adds up to the same as 250,000 330ml-sized plastic bottles – and if laid end-to-end they’d stretch almost from Edinburgh to Stirling Castle.

Natalie Walker, of Scottish Water’s Corporate Affairs Team, said: “We want to encourage more people to drink tap water throughout the day to stay hydrated. It’s great for your health and saves money and protects the planet by taking away the need for disposable plastic bottles.

“It’s also about building a greater appreciation of our water – Scotland’s most precious natural resource. Many people, like Gail, say they miss Scottish water when they are away and 86 per cent of people describe it as “world class. Making it more accessible with the refill taps makes sense – and we are sure people who live in and visit Porty will agree and top up at the new tap.

Scottish Water aims to deliver 70 public space water refill points across Scotland by next spring, including more in Edinburgh.

Rebecca Foster, Consumer Campaigns Manager at Zero Waste Scotland, who helped judge the poster competition, said: “It’s great to see the top up tap being installed in Portobello. Choosing a reusable bottle over single-use reduces the likelihood of litter and also cuts the amount of carbon produced in the materials extraction, manufacture and transport of new bottles. Topping up at the tap is good for your health, good for the environment and saves you money.”

Scottish Water has highlighted how communities, individuals and organisations can take steps now to increase their sustainability by considering how they use and consume water.Using a refillable bottle and topping up at the tap is a great way to stay hydrated, save money and help protect the planet by reducing waste. The utility is leading a drive urging people to Join the Wave - a commitment to a more sustainable future and a celebration of a flourishing Scotland.

Additional safety and cleaning measures have been put in place on all the refill taps as a result of the ongoing Covid pandemic. This includes additional deep-cleaning, disinfecting and maintenance.