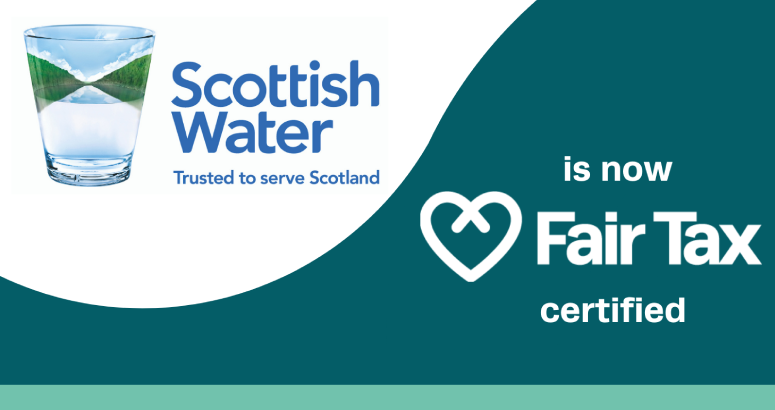 “These benchmarking results show Scottish Water is an organisation which takes seriously its responsibilities to operate ethically, fairly and transparently. These principles sit at the heart of what we do and how we do it.”

Scottish Water’s commitment to fair and ethical practice has been confirmed by double benchmarking success.
The publicly-owned utility has been awarded the Fair Tax Mark certification, for the first time, in recognition of its open and transparent approach to taxation.
And the organisation has also been rated as being a leader in the water sector as well as against nearly 100 other UK organisations in Business in the Community’s Responsible Business Tracker.
The Fair Tax Mark is a world-leading independent accreditation which sees Scottish Water join a growing number of UK organisations which have secured the gold standard for fair and responsible tax conduct.
To achieve the recognition, Scottish Water demonstrated it acts ethically in its tax affairs, with a published tax strategy of exemplary transparency, and a firm commitment to forgo offshore profit shifting and complex tax structures.
Scottish Water also took part in Business in the Community’s Responsible Business Tracker, a benchmarking and improvement tool which is underpinned the UN’s Global Goals. Evaluation took place against more than 100 organisations from across the water sector and beyond.
The outcome placed Scottish Water as a leader in the water sector and above average in the wider network of organisations.
Douglas Millican, Scottish Water Chief Executive, said: “Our service provides the foundation to daily life across the country to millions of people and we’re committed to providing high quality services at all times.
“These benchmarking results show Scottish Water is an organisation which takes seriously its responsibilities to operate ethically, fairly and transparently. These principles sit at the heart of what we do and how we do it.”
Paul Monaghan, Chief Executive, Fair Tax Mark, said: “We are delighted to announce that Scottish Water has joined the Fair Tax movement, and are proudly saying what they pay.
“Their certification means that customers, suppliers and staff can clearly see they have a transparent and responsible approach to tax. It is estimated that annually, due to corporate profits being shifted to tax havens, corporate tax revenue losses in the UK amount to at least £7bn. In these challenging times, just think of the nurses, doctors and teachers we could employ if that tax was paid as it should be?”
Scroll to top