City Celebrates Set of Six Top Up Taps this Christmas

Scotland’s capital has boosted its green status by switching on six new public water taps to keep people hydrated on the go and protect the planet by reducing waste.

Three new taps have gone live in Edinburgh city centre to add to three previously installed throughout the city. It places the capital at the forefront of Scotland’s drive to embrace its public tap water as a vital daily resource.

The six taps are part of Scottish Water’s flagship Your Water Your Life programme which will see 70 installed throughout the country before the end of Spring. Using a refillable bottle to top up at the tap keeps people hydrated, saves money and reduces single use plastic.

Launching the Royal Mile tap, chief operating officer Peter Farrer, said he was proud his home city had become the first place to establish its full network of free water top up points. And he revealed the growing network has already saved the equivalent of 300,000 single use plastic bottles (330ml) since the first tap went live outside Holyrood two years ago. 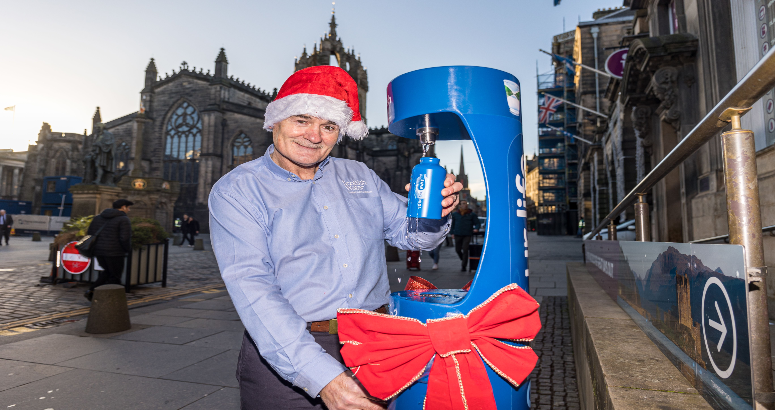 A Christmas gift for the Royal Mile

Scottish Water's Peter Farrer Topping Up at the New Tap

The latest taps are in the landmark locations of the Royal Mile, Grassmarket and at Rutland Place in the West End. The three earlier taps were in place in Leith Links, Portobello and outside the Scottish Parliament.

Mr Farrer said: “There’s a growing appetite among people to carry and fill up reusable bottles and this is a wonderful, sustainable festive gift to this beautiful city. Edinburgh is now leading the way when it comes to making it easier to access free clear, fresh drinking water on the go. Well done for joining the wave by committing to help create a sustainable future.

“We are urging people who live and work in the capital, and the many, many thousands who visit this historic capital to use these taps. With six now installed in some of the busiest parts of the city these is no excuse not to top up when you pass by them.”

Every refill tap is fitted with a monitor which records how much tap is used and this week Scottish Water total use at the 32 up-and-running taps passed milestone 100,000 litre mark.

Mr Farrer added: “When we looked at setting up these refill taps we were very excited knowing the benefits they bring. To reach this landmark figure is a credit to the people of Scotland who should feel duly proud of playing their part in reducing single use plastic waste which we all know can be so damaging to the environment.”

It is expected that other cities and larger towns will follow Edinburgh’s lead and give the green light to a series of taps being put in place.

City of Edinburgh Council Leader Adam McVey said: “Top Up Taps is a great initiative and I’m delighted to see this expand further with the sixth tap in the heart of the city on the Royal Mile. It’s been great to see so many residents using the taps already.  We are committed to reducing plastic in the Capital and these refill spots make it even easier for people to stay hydrated when out and about in a sustainable way.

“Edinburgh now has Top Up Taps in six of our busiest areas, helping us as we work towards eradicating the use of disposable plastic as an important strand of work to tackle climate change in our city.”

The set of new Edinburgh taps were also welcomed by Mark Davidson, manager of Royal Mile Whiskies, one of the world’s most respected whisky merchants and winner of Whisky Magazine Retailer of the Year Award eight times since 2003, which is close to the new tap. 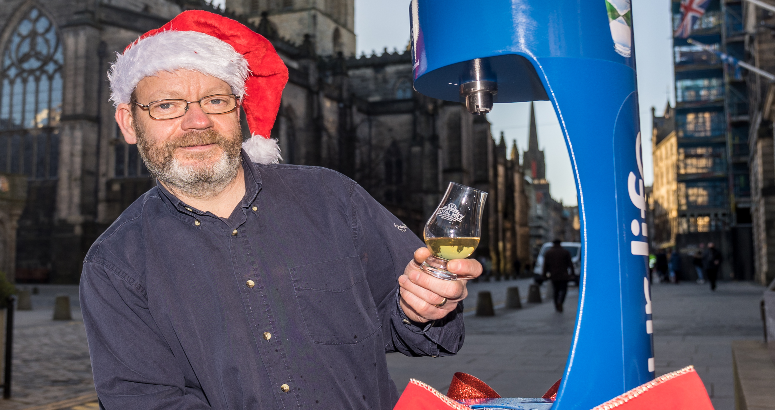 Mark said: “The word whisky comes from Uisge Beath - the Scottish Gaelic for “water of life”. There is no doubt Scotland’s water, which comes from many natural resources, helps make the country’s whisky taste so good. So it is very fitting for us to raise a glass and say cheers to the new refill tap near our shop and for the other five across the Capital.

“Like any responsible business we are reducing our reduce plastic waste and being as green as we can. These refill taps are a superb idea to let people top up have easier access to tap water on the go. They really are a dram fine idea.”

Rebecca Foster, Consumer Campaigns Manager at Zero Waste Scotland, also praised the set of six new taps. She said: “It’s great Edinburgh is now home to a route of six top up taps. Choosing a reusable bottle over single-use reduces the likelihood of litter and cuts the amount of carbon produced in the materials, manufacture and transport of new bottles. Topping up at the tap makes sense.”

Additional safety and cleaning measures have been put in place on all the refill taps as a result of the ongoing Covid pandemic. This includes additional deep-cleaning, disinfecting and maintenance.