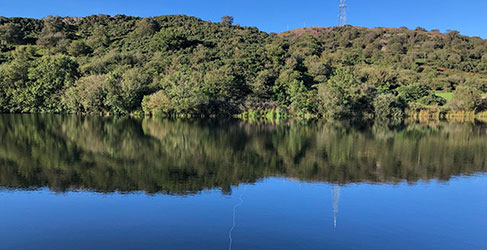 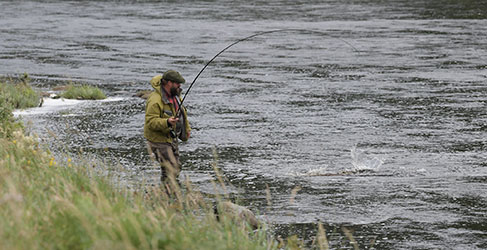 Fishing on the reservoir

An angling club on the brink of collapse was given a lifeline after hooking up with Scottish Water to save a vital fishery.

Dalbeattie Angling Association says the utility’s work to maintain the dam and restore fish stocks at Buittle Reservoir made 2020 was a ‘bumper year’ and has saved it from folding.

The club celebrates its centenary this year and has started 2021 with more than double the members it had a year ago. And for the first time in many years the Dumfries and Galloway-based club starts this special year having made a “slight surplus” financially.

The association’s secretary and chairman Will Marshall said: “What Scottish Water did at the reservoir was a game changer. We now realise what an important part the reservoir plays in terms of the angling portfolio. Being able to get back there led to a surge in our members and we ended 2020 more than breaking even financially which was some turnaround.”

The group had been struggling to survive after the popular reservoir had to be emptied by Scottish Water to treat the area to kill off non-native invasive American signal crayfish. Decommissioning the reservoir and breaching the dam had been considered but the utility agreed to maintain the dam and help restock the fishery allowing it to reopen.

Last March the angling club’s members fished the water for the first time in years. The reservoir was restocked with trout and Sticklebacks, with Scottish Water helping cover some of these costs.

Mr Marshall said: “We had lost around half our members over the last five years and a lot of that was due to us not having the reservoir. There was a good reason for it not being in use during that time, but we had not appreciated just how much that would impact the club. It is clear it is the jewel in the crown to many anglers in the area.

“The work led to a very good catch that always gets us anglers excited. The return of the reservoir and lockdown led to a big turnaround for us, we saw our member numbers shoot up to 100, the highest it has been in years. Many people have said how well the water is fishing and how much people have enjoyed being outdoors at the reservoir again. We also held lots of competitions, for all ages and after such grim times it was great to see so many people out there.

“In 2019 we lost money - and in 2020 we broke even, even making a very small surplus, which is what we had only dreamed of. Scottish Water’s efforts with this project will be remembered by us and we are so grateful for the time they took to talk and listen to the community and by committing resources to this project which ultimately saved our club. We are only a wee club and to be able to work so constructively and successfully with a big national organisation like Scottish Water was superb.

“It is not just anglers who have benefitted, the reservoir is in a beautiful and peaceful location popular with many people in the community who visit for walks. With ongoing Covid regulations in place it is a great site to have which is delivering benefits to many, allowing people to get out in our local environment.”

As well as treating the area to eradicate the invasive crayfish Scottish Water said it delivered improvements at the dam to ensure it is “safe and fit for purpose” for the future including adding a syphon to control the level of the reservoir when required. Scottish Water also carried out repairs to the spillway and improved access to the dam.

A Scottish Water spokeswoman said: “We are delighted the club enjoyed such a successful 2020 in terms of fishing and membership and also that the reservoir has become a more resilient asset which benefits the wider community in this stunning part of Scotland."