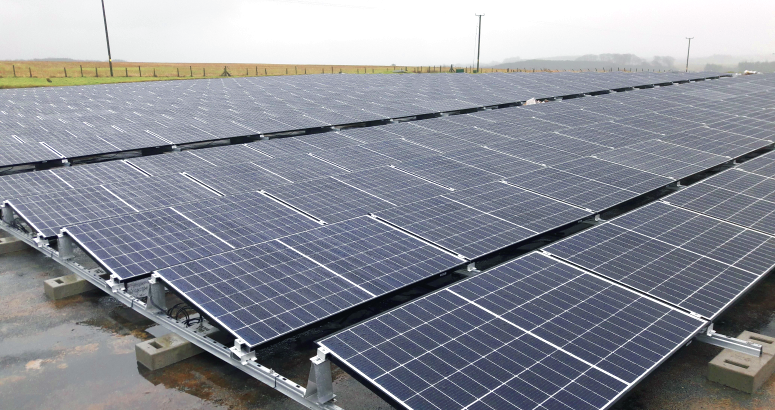 740 solar panels have been installed at Craigie drinking water service reservoir, near Newmachar in Aberdeenshire

A £275,000 project to install 740 solar panels has been completed at Scottish Water’s Craigie drinking water service reservoir, near Newmachar in Aberdeenshire.

With a capacity of 300 kilowatts (kW), around half of the solar energy generated will be used to power the pumps which are a key part of the drinking water supply for over 6,000 homes and businesses between Bridge of Don and Ellon.  The other half will be exported to the grid, contributing to the growing availability of low carbon electricity for all consumers.

The work has been delivered by the publicly owned water company’s commercial subsidiary Scottish Water Horizons and its contractor Absolute Solar Wind & Power.

Project Manager Ian Piggott said: “Harnessing solar energy is just one of the many ways we are helping to tackle climate change and contributing to Scottish Water’s ambitious target to reach net zero carbon emissions by 2040.

“The site at Newmachar provides a perfect opportunity to install this technology, which will have a significant positive impact both on the environmental and financial cost of providing clear, fresh and great-tasting drinking water to customers across Aberdeenshire.

“In the years ahead, we will be seeking to develop further, larger renewable energy projects so that self-generated green power can meet all of Scottish Water’s electricity needs. In Scottish Water Horizons we intend to deliver 90 Gigawatt hours (GWh) per annum of new renewable generation by 2030 to help Scottish Water on its journey to meeting its net zero carbon goal.”

Scottish Water’s local Water Networks Team Leader Robert Robb said: “People often don’t realise that, even in a country like Scotland, a lot of energy is used to produce high quality drinking water and deliver it to customers’ taps 24 hours a day, every day of the year.

“It is a great step forward that we can now generate a significant proportion of the electricity we need from renewable sources within our own site. The solar panels have been installed on the ground above our drinking water storage tank, so it’s a very efficient use of space.”