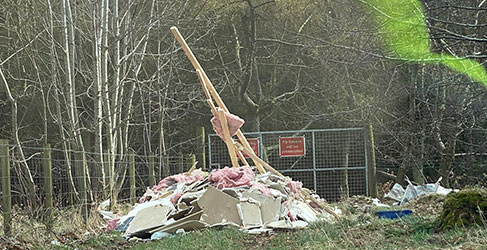 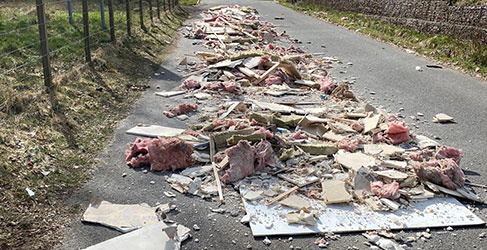 “We are really disappointed that some people would just dump material like this on our access road to the water treatment works or on any road. It is highly irresponsible and we would urge people not to do this and to respect the environment”

Scottish Water is appealing to people to respect their local environment following a fly-tipping incident at a water treatment works in Midlothian.

Two vans drove to Glencorse Water Treatment Works (WTW) near Penicuik last Tuesday and, in broad daylight, tipped a large amount of material, including plaster board, insulation and timber on the access road.

The incident, which appeared to have been planned, took just a few seconds but will cost Scottish Water and its customers thousands of pounds to clear up.

The vehicles involved were open-backed transit van-type vehicles, one white and one yellow.

Members of the public who may have witnessed the incident, know anything about it, or witness any similar suspicious activity, are urged to contact the authorities or to report the matter via Crimstoppers on 0800 555 111

Scott Fraser, Scottish Water’s Corporate Affair Manager in the east, said: “The rubbish which was just dumped on our road at Glencorse WTW looked like it was material from a house renovation, or work like that.

“It was quite shocking and is totally inexcusable as everyone knows that such material should be disposed of safely at a proper recycling centre.

“We have had incidents like this before and the removal of a smaller quantity of waste at another of our facilities cost more than £1200.

“The materials also restricted the width of the road and could have been an obstruction of Scottish Water vehicles getting to and from the WTW.

“We are really disappointed that some people would just dump material like this on our access road to the water treatment works or on any road. It is highly irresponsible and we would urge people not to do this and to respect the environment, including sites like WTWs, reservoirs and other public amenities.”

Anti-social behaviour was reported last summer at reservoirs in different parts of Scotland, including Gladhouse and Clubbiedean near Edinburgh.

Visitors should follow the Scottish Outdoor Access Code. The code’s key principles include - respect the interests of other people, care for the environment, and take responsibility for your own actions.