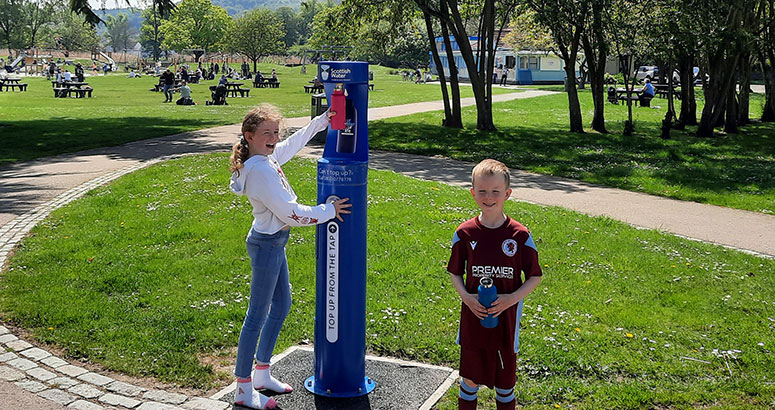 South Inch Park -  home to a new top up tap

“With more than one million plastic bottles being bought in the world every minute, I hope that residents and visitors to Perth alike will now think twice before buying a bottle of water and use one of the re-fill taps.”

Visitors to Perth’s South Inch Park can now enjoy fresh, great-tasting water on the go with the launch a new refill tap.
Scottish Water has installed the new top up tap in the park as a part of a drive encouraging people to carry reusable bottles to help stay hydrated, protect the environment by reducing waste and save money.

The tap, which is located near the children’s play area and The Pavillion, is the second to launch on the Fair City with one being fitted in the High Street last year.

Gavin Steel, corporate affairs manager at Scottish Water, said: “It’s fantastic to have one of our Top up Taps in this popular park used by so many people. We’re encouraging everyone to make the most of it when they are out and about  – remember to take a reusable water bottle to easily top up at the tap.

“Drinking water from a refillable bottle is good for your health, good for the planet by helping reduce the volume of single-use plastic and it's good for your pocket too.

Nine-year-old Amy Tully, of Perthshire, was one of the first people to use the new tap with her brother Matthew, 7. She said: “I love doing my bit to help the environment, and it meant we got to stay at the park longer as we had plenty water to keep us going”
Councillor Angus Forbes Convener of Perth & Kinross Council’s Environment & Infrastructure Committee welcomed the new refill point. He said:

“The refill taps, provided by our partners Scottish Water, will help with the first of many steps Perth & Kinross Council will be taking to help the environment and tackle climate change.

“With more than one million plastic bottles being bought in the world every minute, I hope that residents and visitors to Perth alike will now think twice before buying a bottle of water and use one of the re-fill taps.”

The taps, which are all disinfected regularly, all have tracking devices which record the amount of water they give out.

Since the first Top up Tap was launched more than 170,000 litres of water have been consumed from Scottish Water’s expanding network of the refill points across the country - equivalent to approximately 400,000 plastic bottles. The utility will soon have 50 of the taps in the ground at sites including harbours, beaches, national parks, botanical gardens and other top tourist attractions.