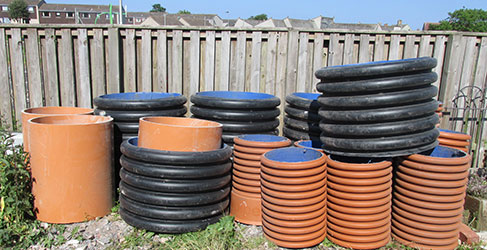 Pipe cuts-offs that were used to make planters

Leftover pieces of pipe being fitted as part of a major sewer project have found a new home – rather than heading to landfill they will be used to help the Borders bloom.

The cut off end section of pipes have been donated to Abundant Borders, a charity which creates a network of community food gardens across the region. These areas are set up as a training base for people to learn how to grow food in a sustainable way and then how to turn that food into healthy, inexpensive meals.

More than 50 pieces of surplus pipe ends, in a range of sizes, will be used as planters in the gardens in Eyemouth and Duns Community Food Gardens.

Scottish Water was carrying out a £3.4 million sewer upgrade in Eyemouth when one of the charity’s volunteers learned about the excess plastic cut offs. Morrison Construction, the contractors on the project, were happy to donate the piping and arranged for it to be dropped off.
Karen Birch, Chief Officer at Abundant Borders, said: “We are all about reuse, repurpose and recycle. When we had the chance to get the pieces of pipe that were left over from the Scottish Water project work in Eyemouth we were delighted.

“Rather than going to landfill we will happily use the pipes in our Community Food Gardens. Some will be used to form planters for fruit bushes and small fruit trees and others used to create herb beds. These products are available for anyone to come along and help themselves to.”

Ms Birch said the charity helps teach people skills needed to grow their own food and as many do not have their own gardens they learn in the special gardens. These small pieces of land were previously underused or derelict and have been turned into productive use for community benefit.

Scott Fraser, Regional Communities Manager at Scottish Water, said: “From pipes to planters, this is such a great way to recycle items like this. No-one wants surplus resources; this is not good for the environment and a waste of money. When laying pipes it is inevitable there will be some cuts off pieces left – so for these to be reused is great, especially by such a worthwhile community project.”

David Bannatyne, Project Manager at Morrison Construction said: “We were more than delighted to donate the excess stock to Abundant Borders, a very worth-while charity. Not only have we left a legacy in preventing any future flooding in Church Street, but there will also be a legacy each year with the flowers blooming in our excess pipes! Not using Landfill sites is a major bonus for Morrison Construction, who do their utmost to reduce waste going to Landfill at all times on all their projects”

George Salter, Sub Agent for amey-binnies added: “We would like to thank Morrison Construction on their donation to a worthwhile local project and the good relationship they have formed with the local community during these works. As we all push to reduce our carbon footprint, initiatives like this can only be seen as a positive step.”