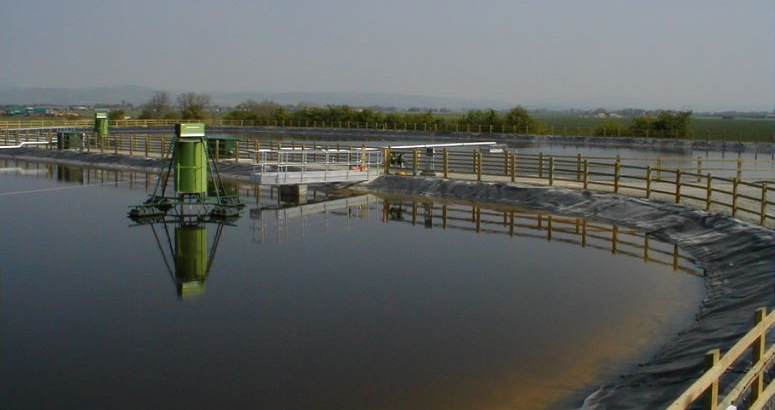 The site at Errol uses a low carbon biological process within a lagoon to treat the waste water.

A ground-breaking waste water treatment works (WWTW) in Tayside that operates using a biological process within a lagoon is marking two decades of low carbon operation.

The decision to install an alternative to the traditional mechanical WWTW in the village of Errol was made in 2001 by the then North of Scotland Water Authority, now Scottish Water, due to the specific nature of the location.

Working with Gurney Environmental and project partners Montgomery-Watson (now Stantech), Errol become the first WWTW in the UK to use the Aero-Fac technology which simplifies the treatment process to a single stage.

Waste water goes straight into the lagoon where sludge is continuously self-digested via an optimised aeration treatment process meaning it uses far less energy, requires less labour and removes the need to tanker sludge away from the site, while also extending the lifespan of the WWTW.

"In the 20 years since the plant was brought into service, it has needed very little maintenance or operator input, and we’ve not yet had to consider emptying the lagoon to remove any sludge build up.

“In addition, there have never been any odour complaints at Errol, nor has there been any contravention of consent conditions in terms of the discharge of treated water to the Tay.

“One of the key features of this plant is the low energy needed to run it, and this, combined with the ability to use wind energy to help power the aerators, make it more energy efficient than many other forms of treatment. While it was not such a high consideration 20 years ago, this kind of technology really supports Scottish Water’s drive to reach net zero by 2040.”

He added: “We have since installed two further Aero-Fac systems with Gurney Environmental and are exploring additional opportunities to utilise the technology at suitable sites.”
Scroll to top