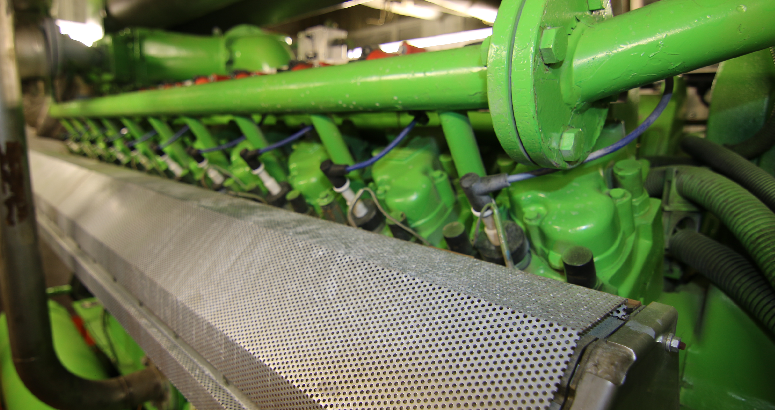 Two Combined Heat and Power engines play a key role in converting waste into electricity at the site.

A waste water treatment process which maximises the production of biogas has helped a Scottish Water site in Aberdeen to transform its carbon footprint and start exporting energy to the national grid.

The CAMBI thermal hydrolysis plant was installed 20 years ago at Nigg Waste Water Treatment Works and since a programme of upgrade work was carried out over the past couple of years, it has now halved its CO2 emissions since 2019.

The improvements have allowed additional sludge to be treated on site, increasing the amount of biogas produced by between 25 to 30 per cent. This has enabled more green energy to be generated along with a reduction in the amount of fuel oil required to power the boiler.

It has also prevented thousands of tonnes of sludge from going to land recycling where it would release harmful methane gas.

The site is now able to consistently produce between 80 to 90 per cent of its electricity needs via two Combined Heat and Power (CHP) engines, with periods where it is also exporting excess power to the national grid.

A new boiler installed last year is partially run by recovering the heat from the CHP engines as well as the biogas produced on site, reducing the site’s reliance on fossil fuels.

“By using the biogas produced as part of the treatment process as fuel for the new boiler, as well as recovering and reusing heat from the two CHP engines, we have managed to almost half the amount of oil used in the boiler – cutting around 1300 tonnes of CO2 emissions per year, as well as making a cost saving of over £250,000 per annum.

“In addition, we have increased our production of electricity on the site by between a quarter to one third since the new digester mixing system was installed and are producing around 12 GW a year of green energy, further reducing the carbon footprint of the site by 1000 tonnes of CO2 a year.”

“We are determined to do all we can to make our sites as green as possible as we focus on reaching our target of net zero emissions by 2040 and recognising the value we can generate from waste is absolutely vital to that.

“When you consider the quantities of waste water that we are treating on a daily basis, being able to turn that into something with a tangible use and creating a circular economy is a key strand of our routemap towards net zero.

“We are delighted with the progress that we have made over the last couple of years at Nigg and further investment in the plant will allow a greater level of efficiency and robustness to be achieved in the coming years, demonstrating Scottish Water’s commitment to meeting our net zero ambitions.”

"Nigg is one of Cambi's earliest thermal hydrolysis projects and we are thrilled to see the plant performing so well after two decades of operations. In Cambi, we continuously improve the technology and make these improvements available to our clients.

“We are glad to see the results of the recent upgrade at Nigg and remain committed to supporting Scottish Water on the way to carbon neutrality."