Look after the loch

01 April 2022
Balgray Reservoir has been lowered to carry out vital maintenance work ahead of a £19.5 million transformation of the Dams to Darnley Country Park in East Renfrewshire.

Scottish Water has dropped the reservoir level by almost 7m to carry out these planned essential works and enable East Renfrewshire Council to create a safe walking and cycling path from Newton Mearns to Barrhead, including a promenade boardwalk along the banks of the water, from Newton Mearns to Barrhead. The new active travel route is part of a larger project to improve Aurs Road. 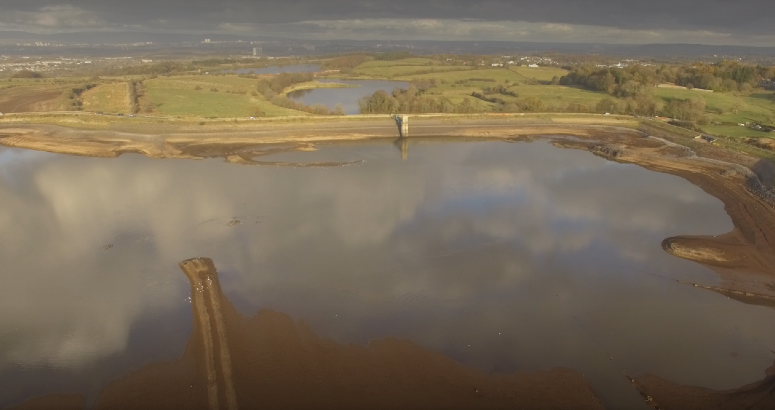 Our huge reservoir – which is not used as a source of drinking water – has been lowered gradually over several weeks, to minimise any disruption to wildlife and the fish population.

Essential dam maintenance is required to ensure it continues to meet the current requirements of the Reservoirs (Scotland) Act 2011.

Balgray will now be maintained at its current level while the planned dam maintenance and the major redevelopment take place.

The smaller Coalhill Reservoir will drain into Balgray as it is linked by a pipe below Aurs Road.

We are working with Clyde River Foundation specialists and a small number of fish have already been transferred from Coalhill Reservoir to nearby Ryatt Linn in anticipation of works starting this spring.

However, unforeseen delays mean work is now not expected to start until early spring 2023. As a result, the reservoir will remain lowered to help prevent the fish population from expanding again and avoid disturbing nesting birds around the water’s edge.

We have been working closely with East Renfrewshire Council on the redevelopment programme on Aurs Road which runs alongside the reservoir.

Mark Petrie, Scottish Water’s Critical Asset Maintenance Manager said: “People have already begun to notice that the reservoir is sitting very low, and they might not see a lot of activity for an extended period.

“We wanted to reassure everyone that we haven’t used Balgray reservoir as a drinking water source for many years and this is a planned activity.

“Scottish Water needs to carry out dam maintenance works on the reservoir and our collaboration with East Renfrewshire Council on their City Deal Project, means both of these major projects will be carried out at the same time, causing the least disruption to the public”

Several mitigation measures are being put in place to manage any risks to the fish population, particularly over the summer months.

The Dams to Darnley project is part of the Glasgow City Region City Deal – a £1.13billion partnership between eight local authorities, the Scottish Government, and the UK Government. The creation of the new walking and cycling path has received additional £5.6million support from Transport Scotland, through Sustrans Scotland, Places for Everyone fund.