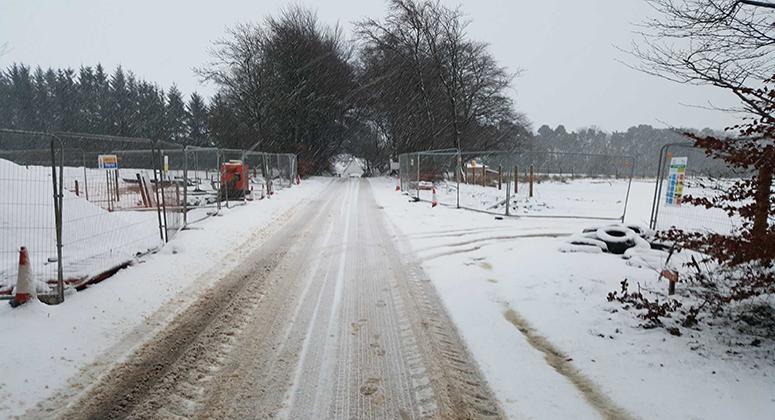 Ambulance crew became stuck while out on emergency run near Fenwick in East Ayrshire.

Workers from Scottish Water alliance partner Caledonia Water Alliance (CWA) got an ambulance moving after it became stuck in heavy snow, using their shovels to dig it free.

It was all in a day’s work for the team who came to the aid of the ambulance crew in East Ayrshire last week.

Whilst working on site at the Highlees project in Fenwick, East Ayrshire the team spotted an ambulance on an emergency run and struggling to make its way along Waterslap Road due to the icy conditions.

Without giving it a second thought, the workers grabbed their shovels and set about digging a clear pathway for the ambulance.  They then pushed the vehicle to the top of the hill where the ambulance crew were clear to continue their journey.

CWA’s Foreman John Middleton was there with the team. Speaking about the incident, he said: “Once we were happy that the ambulance was on its way, we continued to help the rest of the vehicles that were stranded by towing them to a clearer section of the road.

“They were then also able to continue their journeys safely.”

Paul Sexton, General Manager of Scottish Water’s Alliance Management Team, added: “It’s always very heart-warming to hear stories like this; these workers are a real asset to CWA and should be very proud of what they did.

“No matter how busy we can all be at work - and in our daily lives - this just shows that it’s important to take the time to look around and help people when they need it.”

A Scottish Ambulance spokesperson said: “We would like to say a huge thank you to the team members at Scottish Water partners Caledonia Water Alliance for their recent assistance in some tricky weather conditions.

“Winter is an extremely busy time for the Scottish Ambulance Service and it’s always great to see members of the local community helping out where they can. The staff did a fantastic job.”