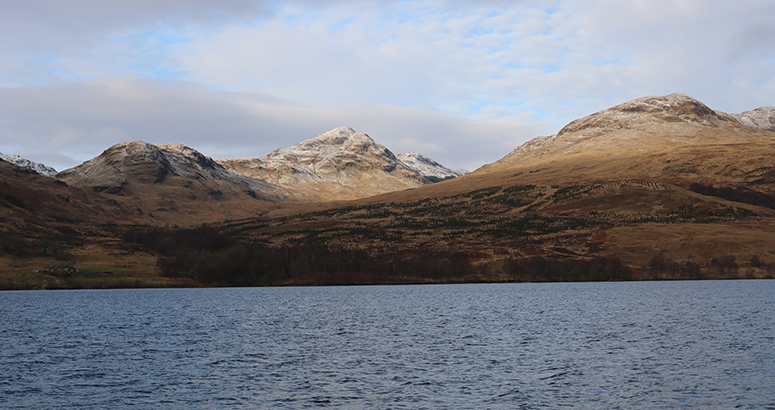 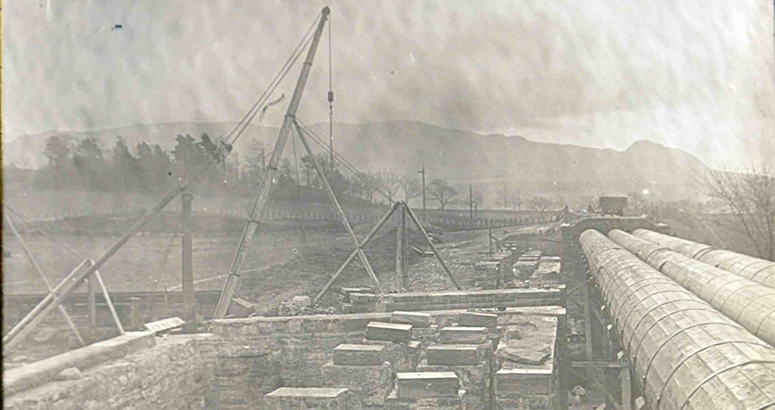 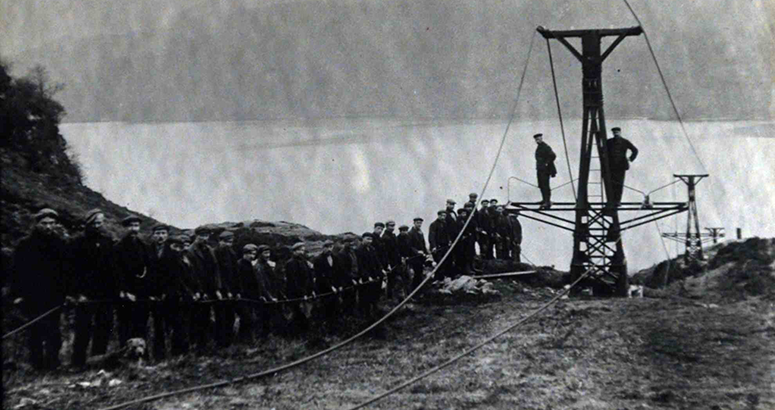 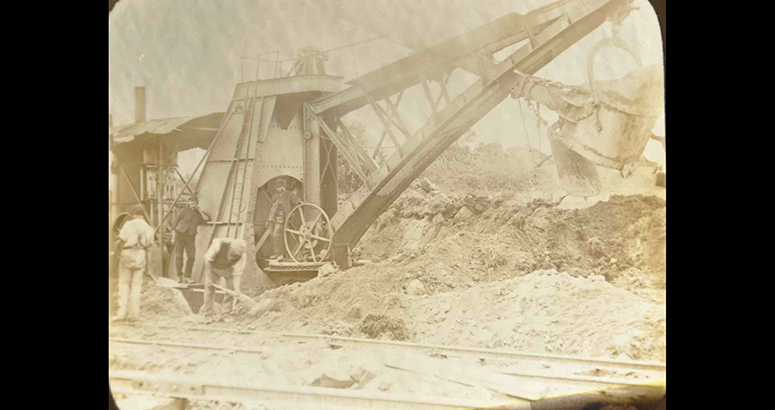 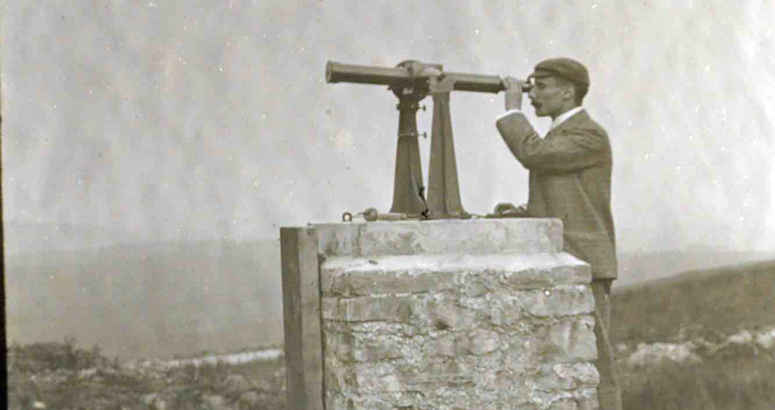 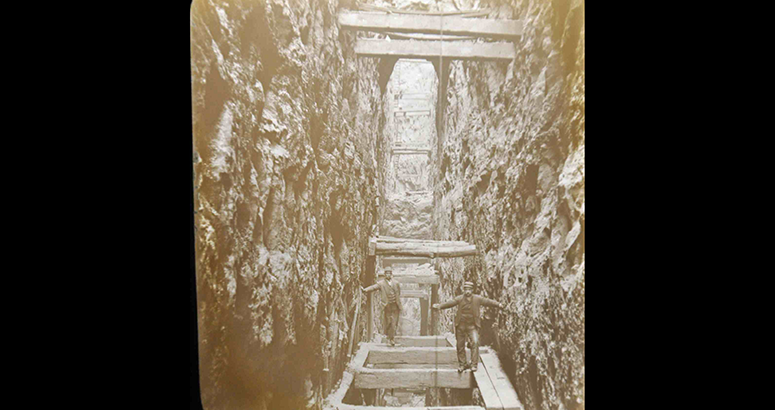 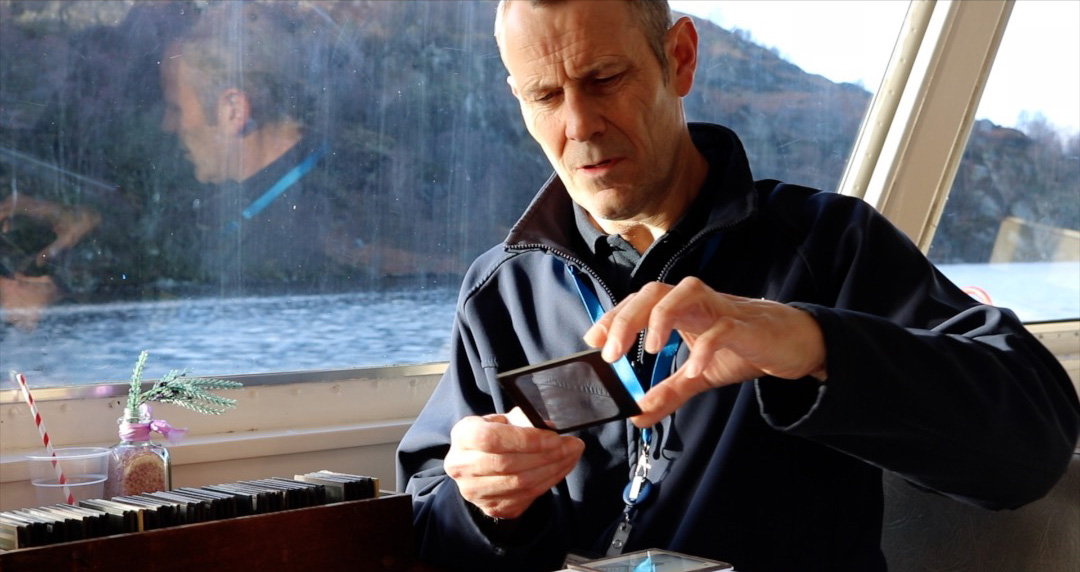 Old photos saved from a skip show construction of 160 year old aqueduct at Loch Katrine which is still in use today.

A forgotten treasure trove of Victorian photographs showing the construction of parts of one of Scotland’s most important pieces of infrastructure has been unearthed.

The Katrine Aqueduct, which takes water to treatment works that supply 1.3 million people in Glasgow and west central Scotland, was built in the Victorian era to help transform the health of citizens and continues in full use to this day.

As modern day engineers are starting a multi-million pound refurbishment project on part of the aqueduct, the recently-discovered photos provide a fascinating insight into the mega-structure which was officially opened by Queen Victoria almost 160 years ago in October 1859.

The glass photograph slides, which have not been seen before by Scottish Water experts with decades of experience of working on the local water network, were recovered from a skip along with some books and drawings when the utility was closing one of its offices.

They include remarkable images of pioneers boring through rocky mountainsides with drills during the construction of the 23.5 mile-long second aqueduct which began in 1885 and was completed in 1901 to increase capacity and meet demand as the population of Glasgow burgeoned to more than one million.

The aqueduct scheme, comprising the two aqueducts, takes water by gravity from Loch Katrine to the Milngavie and Balmore water treatment works before it is distributed to customers across a large swathe of Glasgow and west central Scotland.

The first aqueduct includes tunnels through mountainous terrain in the shadow of Ben Lomond and bridges over the valleys. The second aqueduct was constructed to accommodate the rapid expansion of Glasgow in the late 19th century. The two are as much as six miles apart on some stretches.

The remarkable old photographs, which are inspiring Scottish Water workers on the modern-day £12.5 million project to refurbish part of the overall aqueduct scheme, include:

Endrick Valley picture showing a close-up of the three trunk mains of the old aqueduct and the supports for the new aqueduct near Balfron.

Katrine tunnelling 1892 showing workers tunnelling through rock with machinery to prop up the ceiling of the excavation. The two last pictures would give modern-day health and safety officials sleepless nights

And, from later in the aqueduct project, Loch Arklet pulley system showing a pulley system used by workers to take materials from the Inversnaid area of Loch Lomond to Loch Arklet where a dam was built as part of the Katrine Aqueduct project and siteline worker showing one of many observatories which were constructed along the route of the aqueduct which were up to about 60ft high and were used by workers operating theodolite-like devices to measure and check the route of the aqueduct. ie siteline worker viewing showing a worker doing so from a smaller observation post.

Steven Walker, a leakage field technician with Scottish Water who discovered the photographs with a colleague, said: “I found these fragile glass slides from the construction of mainly the second aqueduct in a skip when we were moving to new offices.

“They were in two boxes or cases among all sorts of items that were to be thrown out. I suspected they were of interest but their true historical value was only confirmed when a colleague who works for us in the Loch Katrine area analysed them.

“The pictures give a fascinating insight into the construction of the second aqueduct and some of the methods used which might appear archaic, and even dangerous, to us now but were the ‘new technology of the day at that time.

“I like to think that the heart of Glasgow is not George Square or somewhere else in the city centre but 8.5 miles to the north in Milngavie where the two aqueducts end.

“The boom in shipbuilding that helped Glasgow ‘flourish’ was able to happen only because of the two amazing aqueducts that bring water from Loch Katrine to the two reservoirs at Milngavie and the water treatment works there.

“It’s remarkable to think that the first aqueduct was so successful, and Glasgow grew so quickly, that within 30 years they had to repeat the process and build a second aqueduct to double the output. These pictures are an important part of that story and I’m delighted we were able to save them.”

In the construction of the second aqueduct, the engineers were able to take a more direct line because they had available improved boring and blasting equipment.

When the second aqueduct was constructed, the pneumatic drill and gelignite were available and progress was much more rapid than during the first aqueduct, increasing from 35 to 44 yards per month.

The possession of more efficient plant enabled the engineers, by tunnelling, to take a straighter line through the hills in the construction of the second aqueduct. This meant only eight bridges were required on the second aqueduct compared with 22 on the first.

The entire Katrine Aqueduct scheme cost £3.2m to build which would be about £320m in today’s prices.

The current refurbishment project on the Katrine Aqueduct is expected to be completed in 2020 and is being carried out for Scottish Water by contractors George Leslie. It includes structural repairs of three stretches of tunnel and a bridge, improvements to the lining of tunnels and repairs and refurbishments of control valves.

Mr Jon Rhodes, the refurbishment project manager, said: “We have just started this major project to refurbish part of the aqueduct and the discovery of these spectacular old images will be an inspiration to my 50-strong project team to ensure our 21st century work builds on the legacy of those Victorian engineers and enables the aqueduct to perform to its optimum for many years to come.”

However, through the use of cross-connections in our system and by pumping from elsewhere on our network, we will be able to maintain normal water supplies to customers during the project.