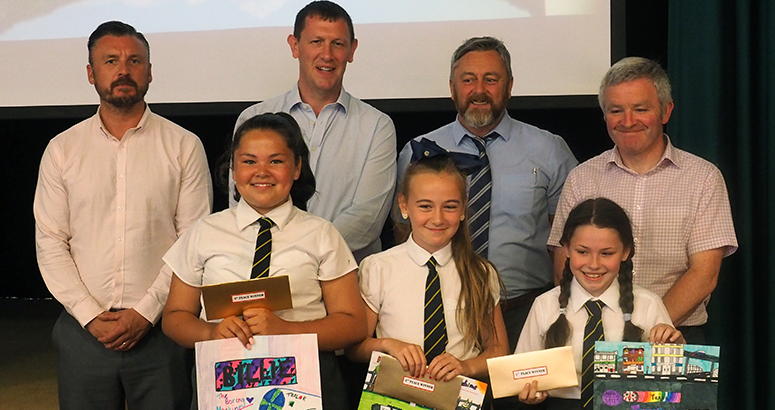 School pupils in Paisley have been given the chance to name the second Tunnel Boring Machine (TBM) to be used on Scottish Water’s environmental project in the town.

And, there was no chance the name could ever be ‘boring’ when pupils at St Charles Primary School were set the challenge of coming up with the name earlier this month.

A mining tradition which dates back to the 1500’s, all TBMs are given a woman’s name before being set to work under ground.

The competition winner was announced at the school’s end of term assembly, and primary five pupil Hope Hunter was delighted that the name she suggested, Tunnelling Tanya, was chosen by the judging panel.

Head Teacher Grace Hannigan echoed Hope’s delight. She said: “It’s been so exciting for our pupils to learn all about a major engineering project that’s happening right here on their doorstep. To have the honour of naming such a crucial piece of equipment for the project, and being invited down to site when the TBM arrives is just fantastic for Hope. She’s absolutely delighted!”

The eagerly anticipated TBM is currently being manufactured in Germany and is expected to arrive on site in August.

Fifteen-hundred millimetres in diameter and weighing in at an impressive 23 tonnes, Tunnelling Tanya will tunnel at depths of up to 27 metres and will remove 5,000 tonnes of rock as she makes her way under Saucelhill Park.

Brian Boland, Project Manager, commented: “The school children were all very enthusiastic about the project and, of course, the competition! Engaging with local communities and keeping them up-to-date with what’s happening is a key element of our work and one that’s extremely important for the delivery of a successful project. We’re looking forward to working with the school as the project progresses.”

Scottish Water contractors Amey are constructing the large interceptor sewer in Paisley which, once completed, will substantially reduce the frequency of spills from the sewer network into the Espedair Burn and White Cart Water in storm conditions. The project will therefore improve the river water quality in the two watercourses and, in turn, the River Clyde.

The investment, which is the biggest of its kind Scottish Water has ever made in Renfrewshire, is part of the company’s £250m, five-year programme of work, launched in 2013, to improve river water quality and the natural environment and tackle flooding across the Greater Glasgow area.