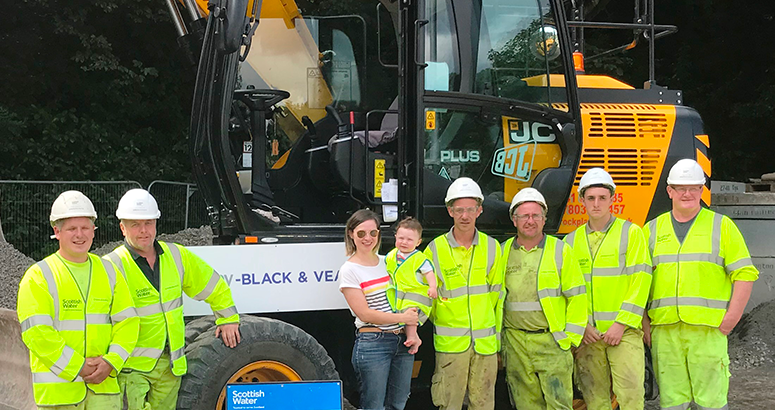 Little Alastair loves to watch digger at work while out in his pram.

A young Rutherglen boy had his day made when Scottish Water and its alliance partner amey Black and Veatch (aBV) enabled him to visit one of their diggers during a project in his street.

Fourteen month-old Alastair Brown, of Viewpark Drive , has spent most of the winter and spring months watching aBV’s diggers in his street in Rutherglen as they worked on upgrading Scottish Water’s waste water infrastructure in the area..

His mother, Julie Brown, was so pleased that the diggers kept Alastair occupied for hours on end, and so impressed with the way the aBV team worked that she contacted Scottish Water to tell us how fantastic they had been.

Mrs Brown said: “They’ve been polite, considerate and friendly at all times. The closure of our street and, at times, our driveway, could have been a real inconvenience. However your staff were so pleasant, it wasn’t the case at all.

“I have a young baby and when the works started I was often out walking with him in the pram to get him to sleep. Whenever the men saw us walking towards them, they would signal to each other to stop working to avoid disturbing him. They would also chat to me and Alastair who was most intrigued by the works, particularly the diggers.

“I understand from several neighbours that they also found the men to be very pleasant; they couldn’t fault them.”

aBV’s Regional Communications Manager, Jeff Windross decided to speak to his team to pass on the customer’s letter and the team then arranged for Alastair, his mother and grandmother to visit a digger at their site accommodation.

Site Operative, Gary McDougall welcomed the family and gave Alastair the opportunity to see a digger up close and personal. aBV also gave the toddler a mini aBV hard hat and reflective vest.

Mrs Brown was over the moon aBV’s gesture. She said: “It was so nice to meet Gary and his team again. Gary had made such an effort to keep us up-to-date when our road and driveway was blocked. He knew the impact that the project would have on a family with a young baby and he took the time to visit regularly to see if his team could assist.

“During the bad snow in February, Gary’s team helped to grit the pavements and clear the snow for our neighbours. My 80-year-old neighbour told me that when his drains became blocked [unconnected with the project], aBV helped him to clear the blockage.

“The team also carried residents’ shopping to their homes when they were unable to drive up to their house.”

Jeff Windross said that during the spring, aBV helped a young bride in the street. The team ensured that the road was cleared to enable the wedding car to drive up to the bride’s house. aBV also laid tarmac on the road earlier than planned to ensure the street looked nice for the photos.

Scottish Water’s Alliance Management General Manager Paul Sexton said: “I am always so pleased to hear that our capital alliances are keeping communities at the heart of the business. aBV have demonstrated that when they are in the street digging, they are thinking about the community every step of the way.

“This is a great example of our people putting themselves in our customers’ shoes and engaging with a community.”
Scroll to top