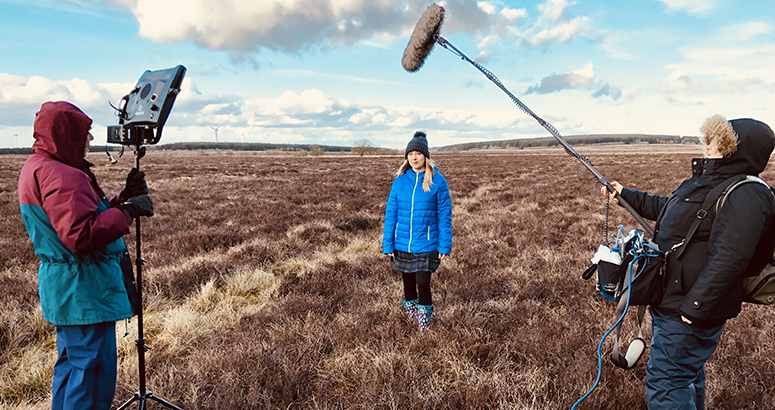 Erin has filmed five vlogs to share the story of Scottish Water with customers for a six month nationwide consultation Shaping the Future.

A Scottish video blogger has turned the camera on the future of the country’s public water services.

Erin Doogan has teamed up with Scottish Water to help tell the story of Shaping the Future – the utility’s six month public consultation on the way water and waste water services are delivered over the next 25 years.

Erin is best known for her social media @BeautyCreep vlogs and covers a wide range of subjects including the environment and the great outdoors.

The 27-year old dementia support worker from West Dunbartonshire vlogs in her spare time and has built up a following of tens of thousands of followers.

Now Erin has created five short vlogs with Scottish Water which tell the story of how the nation’s water and waste water services run and what the future might hold.

During filming, she met surfers on a beach at St Andrews, visited a peat bog, saw first-hand the items people dispose of inappropriately down their drains, witnessed a multi-million pound investment project progressing and pulled on a white coat in Scottish Water’s laboratories to see behind the scenes how 1.35 billion litres a day of water are produced.

In one of the films, Erin even quantifies how much water she uses in a day – and is surprised at the results.

The films will help visitors to the Ideal Home Show this weekend, the Royal Highland Show next month and the Belladrum Tartan Heart music festival in August share their views on the future of Scotland’s water services. They’ll also be available on Scottish Water’s social media channels.

Visitors to Scottish Water’s eye-catching stand at the Scottish Exhibition and Conference Centre in Glasgow this weekend will be amongst the first able to take part in the consultation assisted by Erin’s films which cover the big ambitions contained in Shaping the Future.

Erin, a keen hillwalker, said: “All I drink is tap water so the link up with Scottish Water was perfect. Our country’s water is so important to how we live our lives, and I think people should be interested to find out more.

“I started doing the vlogs around eight years ago and it’s grown over that time. Although I started out initially talking about beauty it’s developed into me discussing Scotland, what it is to be Scottish Scottish and our countryside.”

Director of Corporate Affairs, Brian Lironi, said: “We’re really excited that Erin has created these engaging short films which help tell the story of our ambitions for the next 25 years. It’s important to reach out to audiences in new ways and the aim of the vlogs is to capture in a couple of minutes the story of Scotland’s water, how we’re looking after it  as well as the challenges we face and how we want our customers to help us.”