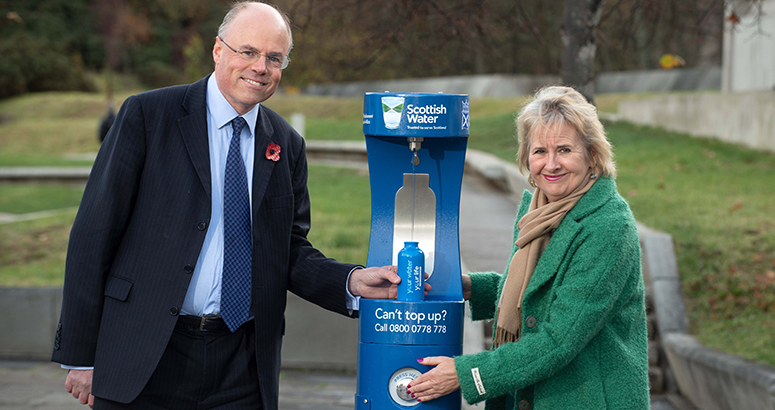 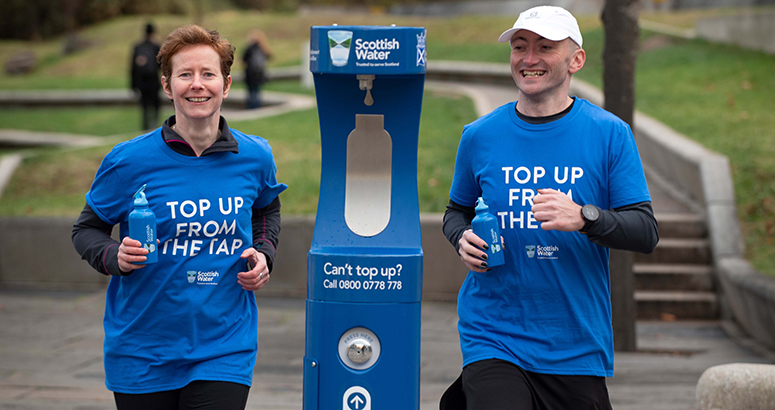 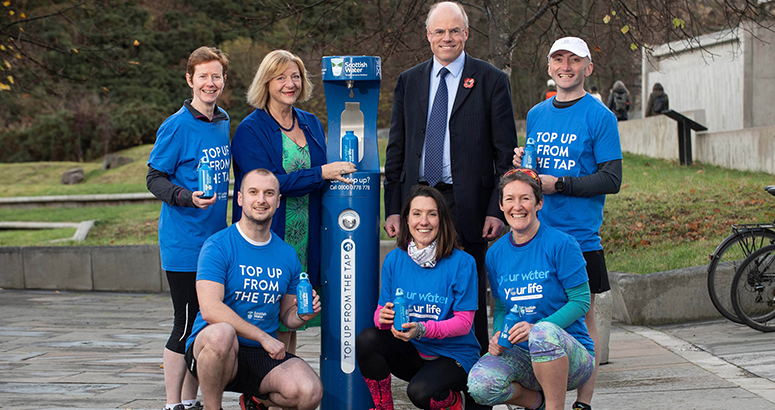 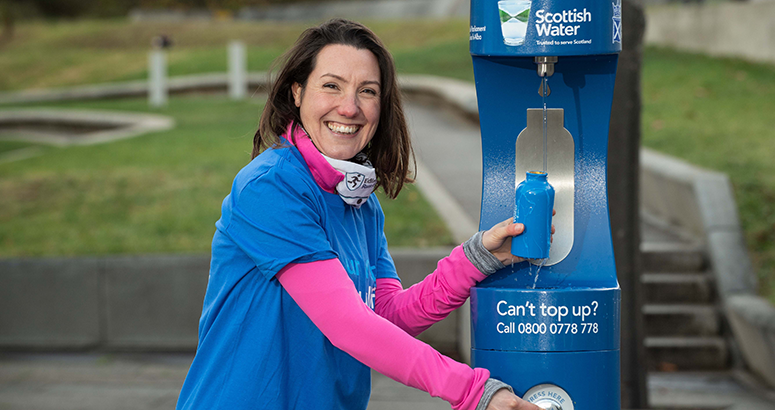 Scottish Water’s first high tech Top up Tap has been switched on allowing thousands of people to stay hydrated on the go in one of the Capital’s most historic areas.

The water tap located outside the Scottish Parliament in Edinburgh is the first of a network which the utility plans to install in towns and cities over two years.

The location of the first Top up Tap gives visitors to Holyrood Park, the Parliament and other nearby attractions access to fresh, clean drinking water at the push of a button.

Water drinkers can refill their bottles simply and quickly to stay refreshed and help reduce the impact of waste on the environment.

Edinburgh runner Nicole Wright was the first to top up her refillable bottle from the hi-tech unit which will digitally tracks water usage, helping to record both cost and plastic savings.

She was joined by Scottish Water Chief Executive Douglas Millican, Deputy Presiding Officer of the Scottish Parliament Linda Fabiani MSP and Environment Secretary Roseanna Cunningham as the first water flowed from the Top up Tap.

The creation of a Top up Tap network forms part of Scottish Water’s drive to encourage its customers to carry a reusable bottle and refill on the go, for the benefit of their health, their pocket and the environment.

The Your Water Your Life campaign aims to make ‘tap’ the first choice of Scotland’s water drinkers.

This newest Top up Tap, made from marine-grade steel, is connected to the mains water supply and will be inspected regularly to deliver high quality drinking water to those looking to top up on the go.

Douglas Millican, Scottish Water Chief Executive said: “We’re thrilled to play our part in helping change the way water is consumed in Scotland. We want to encourage people to stay hydrated on the go by topping up their water bottles and in doing so help reduce waste.

“It’s a great location for our first Top up Tap, right outside the Parliament, near to Holyrood Park and the Royal Mile where thousands of people come every day. I hope as many people as possible use the Top up Tap and that its prominent position will make it a regular stop of runners, walkers, cyclists and other visitors to the Holyrood area.”

Deputy Presiding Officer Linda Fabiani MSP said: “The Scottish Parliament is delighted to support this initiative and to be the first location in Scotland to turn on its Top up Tap.

“Our message is simple: topping up from the tap is good for you, good for your pocket and good for the environment. Top up here!”

Environment Secretary Roseanna Cunningham said: “I am delighted that our Programme for Government commitment to pilot the creation of a network of public water refill points is coming to fruition so quickly with the first tap being turned on outside the Scottish Parliament.

“By encouraging people to top up from the tap using refillable bottles, we will cut down on our use of plastics, while promoting the benefits of hydration to people’s health. I look forward to seeing more top up points appearing across the country as the network expands, and also to refilling my bottle outside the parliament.”

Personal trainer Nicole Wright, 36, owner of Edinburgh Run Tours, who uses Holyrood Park every day said: “It’s great to have been the first to refill from the new Top up Tap, which is a very welcome addition to the area.

“Americans on my tours regularly ask about the availability of water points, so it’s a positive move for Edinburgh and Scotland as a whole.  Having access to a drinking water when out running is such a good thing and I know the Top up Tap will be a daily stop for me and my clients.”