Scottish Water is investing £2.5 million in a major project to help reduce the risk of sewer flooding in Lanark.

The project involves the installation of a new storm storage tank and larger pipes to increase the capacity of the existing sewer running along Bernard’s Wynd.

It is being delivered by our alliance partner, amey-binnies, and is expected to be completed in summer 2022. 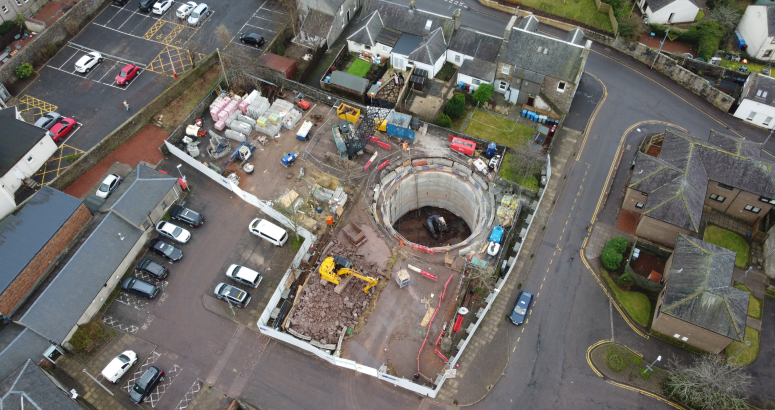 New infrastructure being built as part of this major investment will help reduce the risk of sewer flooding. This photo shows the scale of our works in Wellgate Car Park.

What We Are Doing

We are upgrading the existing sewer running along Bernard’s Wynd with larger pipes. We are also installing a new storm storage tank.

During times of heavy rainfall, excess water will spill into the new tank and be stored there before it is pumped back into the sewer once water levels in the sewer are low again.

The storm storage tank and infrastructure will be installed underground at Wellgate Car Park.

A kiosk will be installed next to the pedestrian steps into the car park to house power and pumps, so these can be maintained.

Work began in November 2021 and is expected to last for around nine months.

Why We Are Doing It

Historically, the area has been prone to flooding during times of heavy rainfall.

Once complete, the increased capacity in the new infrastructure will help reduce the risk of sewer flooding in the area.

The build of the underground storm tank at Wellgate car park is largely complete, with some final remedial works required.

Works on the main sewer pipe installation are due to begin in Bernard’s Wynd at the end of March.

All traffic management arrangements and local diversions have been agreed in liaison with South Lanarkshire Council. Road users and the local community are thanked for their patience.