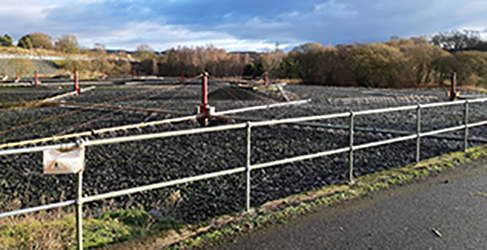 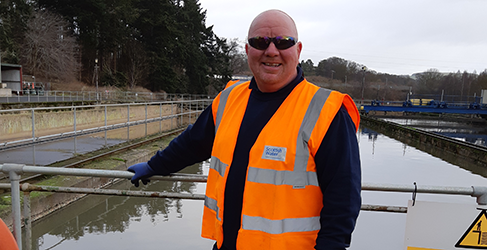 A waste water treatment works in the Borders has become one of Scottish Water’s most self-sufficient energy sites.

Galafoot Waste Water Treatment Plant in Galashiels now generates more energy than it uses. To mark the renewable generation milestone a plaque will be put up at the site which sits next to on the bank of the River Tweed.

The site generates the electricity from sewage sludge, the semi-solid by-product of waste water treatment – using a technique called Combined Heat and Power (CHP).
On average the Galashiels site generates more than 18,000 kWh/week of renewable energy - which is enough to power 204 homes for a year.

The site does still have to import a small amount of power to the site when the CHP needs maintained, but the consumption of imported power to the site has dropped by a dramatic two thirds since the CHP was installed three years ago.

Only two operators work at the Galashiels site which processes an average 150 m3 of sludge every day. The sludge is created as part of the water treatment process at the site – which serves a population equivalent of around 27,000. It also treats sludge from most other parts of the Borders, from Eyemouth in the east to Newcastleton in the west.

Brian Reavely, better known as Fudge, has worked as a Site Operator at Galafoot for 27 years. He says one of his proudest achievements is seeing how the site has transformed the way it operates – and ensuring it becomes a green as it can.

The 52-year-old, who lives in the town, said: “Treating waste uses a lot of energy, if you think about what we are dealing with and the different processes it has to go through you get an idea. Added to that this site operates round the clock every day, so it needs a lot of power.

“We take our environmental responsibility very seriously here, even down to recycling items like cans and bottles and packaging in our kitchens. And one thing we have started doing is working with our neighbouring works to ensure that the sludge dry solids are as high as possible when they arrive at our site -– to save on energy use, reduce our carbon footprint and minimise vehicle movements.  Things like this can make a real difference. The imported sludge is mixed with the on-site, indigenous sludge. This feeds the digestor which produces the gas (methane) which is the fuel for the 124 kW capacity CHP.

“We are very green-aware here and proud of what has been achieved, so much so I have made signs reminding us of how self-sufficient the site is. I also thought it would be a good idea to let people in the town and the many people who visit here know about our achievements and it was decided a plaque highlighting how energy efficient we are would be a good way to let people know.”

Another addition to the site is a collection of items that have been put down toilets which enter the sewer network in the town these include a number of rubber ducks, false teeth, plastic toy figures, tennis balls, a dog’s chewy toy and various sized toy cars.

Fudge said: “Whether these things have been put down accidentally or not they can block our drains and do real damage to the network. So we do urge folk to be careful what goes down their toilets and sinks.

“But it is baby wipes which are our biggest headache these days, the number of items put into the sewer is unbelievable. They do not break up – where do people think they go? They just clog up our machines and causes blockages that can lead to flooding and bursts.

“One of my biggest hopes for the new year is for more people to get the message that they have to be more careful what they put down their loos and sinks, be that baby wipes or sanitary products or fats and oils and grease.

More than 70 of Scottish Water’s water and wastewater treatment works are either self-sufficient or partly sufficient in their power requirements, leading to lower operating costs and a more sustainable business. Galashiels is one of the top five that offset most of the site’s use as well as being able to export to the grid– others include Glencorse Water Treatment Works, near Edinburgh and Loch Turret Water Treatment Works in Perth and Kinross.

Simon Parsons, Scottish Water's director of strategic customer service planning, said: “To keep the cost of our services as low as possible it is essential we develop our approach to energy management and continue to reduce our carbon footprint.

“Where appropriate, like at Galashiels, we’re exploring opportunities to export energy to the National Grid, showing that it’s possible to maximise the economic advantages of Scotland water resources in the spirit of a Hydro Nation and contribute to national renewable energy targets.”

“Scottish Water is committed to continuing to reduce its energy bill and further increase renewable generation – and Galashiels is a wonderful example of what can be achieved.”

Three years ago Borders College in Galashiels became the first organisation in the UK to benefit from a waste water heat recovery system, installed in partnership between Scottish Water Horizons and SHARC Energy Systems. It extracts the natural warmth contained in waste water in the sewer and transfers the heat to the clean side of the heating system via a heat exchange mechanism. The recovered heat is then amplified via pumps to generate appropriate temperatures for use in buildings.

The heat produced is being sold to Borders College producing savings in energy, costs and carbon emissions. The system now provides around 95 per cent of the heat needed by the Galashiels campus.

It achieved the energy efficiency figures through a range of initiatives, including self-generation on many of its sites, utilising new technology including hydro, wind, solar, biomass boilers and combined heat and power (CHP) and hosting third-party private generation such as large-scale windfarms.

In just three years, Scottish Water has raised the annual financial benefits of its efforts to reduce its energy bill and increase renewable generation to more than £8m.