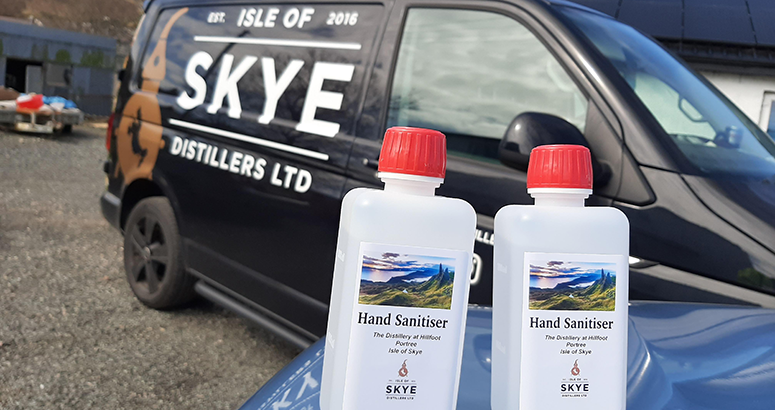 Scottish Water has donated hundreds of sampling bottles to aid the distribution of hand sanitiser on Skye.

Scottish Water has helped out a Skye gin distillery which has started producing hand sanitiser to try and slow the spread of coronavirus.

The organisation stepped in to provide hundreds of empty sampling bottles which would allow Thomas and Alistair Wilson of Isle of Skye Distillers to decant and distribute the hand sanitiser they had produced across the community to key workers.

After the virus reached the UK, the brothers decided to scope out what they would need to produce hand sanitiser, as per the ingredients listed by the World Health Organisation.

“The recipe was actually quite simple, and after putting out an appeal on Facebook for some peroxide which a number of local hairdressers in the north of Skye donated to us, we were pretty much ready to go,” Thomas explained. “The only problem was how we could distribute it, as none of the bottles we had at the distillery were suitable.”

After hearing about the issue, local NSO (network services operator) John MacRae decided to see if he could help out by sourcing some bottles.

He said: “I got in touch with Willie Cowie, a sampling officer in Portree, and just asked him if we had any old bottles that were about to go out of date and would just go to recycling otherwise.

“We were able to supply around 500 bottles to the distillery to use in the first instance which they were delighted with and we’ve also been able to source them more bottles through our own suppliers.”

The first batch was produced and distributed for free to key workers, including those at Scottish Water,  after the HMRC waived the usual duty that applies to alcohol products, with another batch in production which will be sold at cost price.

“We wouldn’t have been able to do this without Scottish Water,” Thomas said. “We would have been stuck if we couldn’t get any suitable bottles to distribute the hand sanitiser in. I had ordered bottles around five weeks ago but they still haven’t arrived. Everything has just ground to a halt.

“The first 500 bottles we got from Scottish Water are all gone, they’ve gone to the NHS, to the police, to care workers – and not just in Skye, we’ve had requests from all over Scotland so we’re doing what we can to distribute it as widely as possible. We’re hoping to have more ready to go at the end of the week.”

He added: “It’s been a real community effort to get this produced and out there.”

John said: “The hand sanitiser in Skye just disappeared as quickly as it did everywhere else so it was impossible for us to get hold of - we’re very grateful to Thomas and Alistair for what they’re doing.

“I’ve distributed the sanitiser we got to every single member of the team who is out and about around Skye carrying out essential work at the moment – we need to take extra precautions just now and make sure we have some way of cleaning our hands when we’re out on jobs. Having a decent supply means we don’t have to scrimp on using it which is important.”

He added: “I feel quite privileged to have been able to help out in this way and for Scottish Water to play a small part in helping the distillery provide a service to those people who are out who are carrying out essential roles at the moment.”
Scroll to top