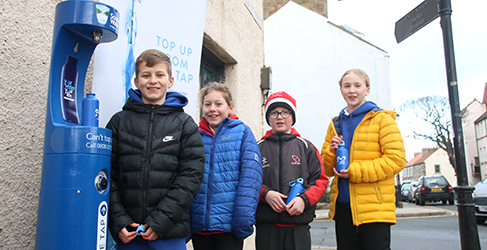 The state-of-the-art tap, the first to be installed in East Lothian, will allow people who live, work or visit the popular seaside town to top up with free water while out and about.

Located at the junction of Quality Street and High Street it tracks the amount of water used and equates this into the amount of plastic waste saved.

Youngsters from the town’s Law Primary School helped launch the new refill station and urged people to think about how they disposed of plastic to prevent pollution. The 11-strong group of pupils said: “Like many young people we are worried about the amount of plastic being used and dumped, so this is a really clever idea which is much better for the environment than using plastic bottles.

“It's a great way to provide people with clean fresh Scottish water, especially if they are visitors to North Berwick who need to top up.”

The blue tap is part of Scottish Water’s Your Water, Your Life campaign which encourages more people to carry a refillable bottle and drink more tap water to stay hydrated, save money and help protect the local environment by reducing plastic waste.

Environmental charity Fidra, which works to reduce plastic waste in the area, also welcomed the new refill tap. Senior Project Manager Dr Clare Cavers said: “This is a great addition to North Berwick as a popular tourist destination and will encourage more residents and visitors to carry a refillable water bottle.

“With present day concerns around plastic waste and single use, Fidra is keen to see people ditch disposables and a move to reusable water bottles is a simple first step that everyone can take.” 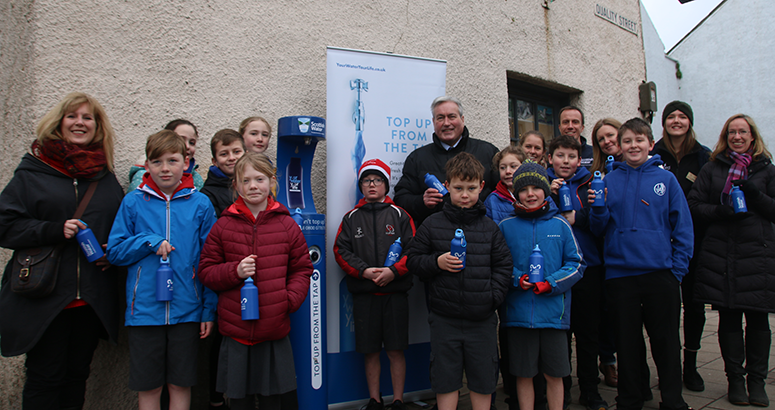 Iain Gray, MSP for East Lothian, also attended the launch. He said: “This new water top up tap will allow local people to refill their water bottles with high quality drinking water, which is not only good for their health but also for the environment by helping reduce reliance on single use plastic.

“I’m sure the tap will be an asset for the area and benefit local residents as well as the town’s many visitors and tourists.”

And Susan Davies, CEO of the Scottish Seabird Centre, said: “As a marine conservation and education charity, we welcome this move by Scottish Water to install a refill tap in North Berwick. Single use plastic pollution, including plastic water bottles, are causing huge problems for our marine wildlife and habitats across the globe.

“Initiatives that make it easier for people to make changes to their lifestyle, such as using reusable water bottles, are essential to help turn the tide on plastic pollution.”

Since the first tap was launched in Edinburgh 14 months ago, more than 55,000 litres of water have been drunk from the expanding collection of refill points - the equivalent of 167,000 standard 330ml single-use plastic bottles.

East Lothian’s tap is the 21st to be installed – with dozens more planned Scotland-wide.

Scott Fraser, Corporate Affairs Manager at Scottish Water, said: “North Berwick is a hugely popular seaside town – making it an ideal spot for one of our refill taps to help people who live, work and visit here top up on the go.”
Scroll to top