Water Load of Fun in Dunfermline 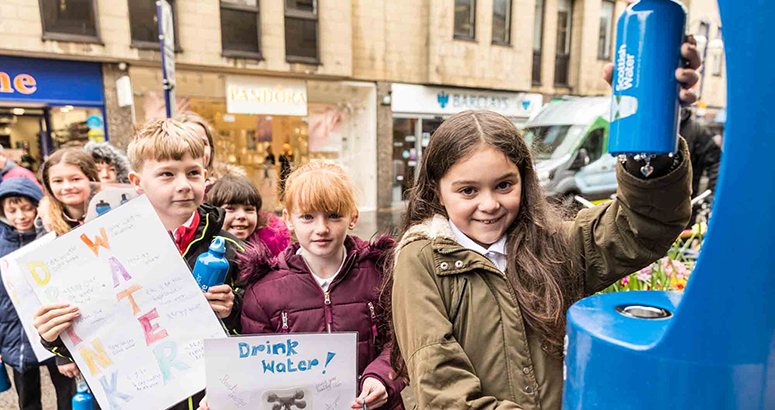 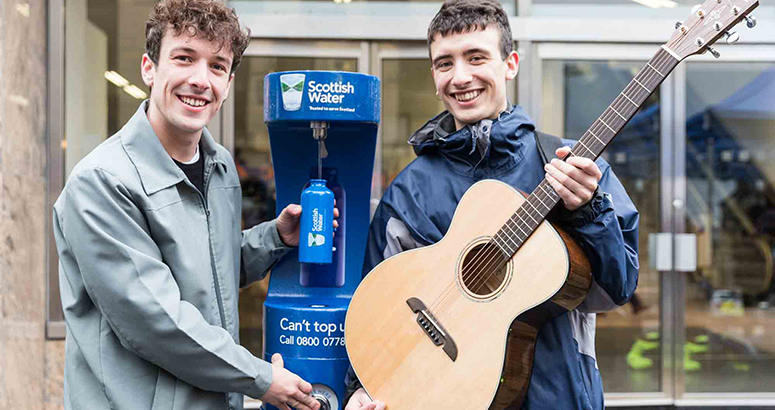 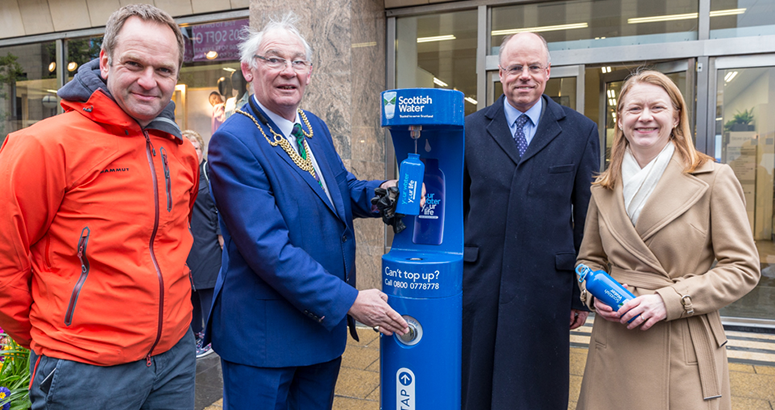 Scotland’s newest water top up tap has been unveiled by the band whose music is the soundtrack to the campaign to encourage people to stay hydrated on the move.

Dancing on Tables enjoyed the first refill of water from the Top up Tap in their hometown Dunfermline – the tenth Top up Tap to be installed across Scotland as part of Scottish Water’s Your Water Your Life campaign.

The high-tech Top Up Tap has been installed at the Kingsgate end of the High Street as part of Scottish Water’s national initiative to encourage people to carry a reusable bottle and stay hydrated out and about.

The band, whose song “Oh” features in the campaign, was joined by pupils from Lynburn Primary School’s Green Team. The youngsters showed off their latest pieces of artwork and recited a poem they had written for the launch which highlights the benefits of topping up from the tap.
Hot off a trip to the USA, Dancing On Tables performed at the refill tap launch with acoustic renditions of the song used in the nationwide campaign, as well as their latest single “Black.”

Shirley Anne Sommerville MSP and Provost of Fife, Councillor Jim Leishman helped officially opened the tap and welcomed the town’s newest landmark. The refill point is the tenth to be installed since Scottish Water announced it would create a network of them across the country to offer people access to fresh, clean drinking water at the push of a button.

Plastic Free Dunfermline, a movement led by local businessman James Daw, which is focused on getting residents, schools, community groups, businesses and Fife Council to reduce their singe use plastic consumption, initially approached Scottish Water about Dunfermline getting a tap. It supported Scottish Water in finding a suitable location.

Watch footage from the launch here

Top Up From The Tap in Dunfermline

Douglas Millican, Scottish Water’s Chief Executive, attended the launch and said: “I am delighted that our landmark tenth tap has been installed here in Dunfermline, home to Scottish Water’s Head Office. This tap represents a real milestone in the campaign and shows our commitment to providing public water refill points in towns across Scotland.
“I would encourage local residents, workers and visitors to the town, to make full use of the tap year-round by topping up their reusable bottles when they’re out and about.”
The unit, which is connected to the mains water supply and inspected regularly, digitally tracks the water usage and records both cost and plastic savings. A recent Scotland-wide study found that almost two thirds of people now carry a refillable water bottle with them at least some of the time.
Commenting, Dunfermline and West Fife MSP, Shirley-Anne Somerville, said: “I’m pleased to see Dunfermline become the home of the latest top up tap in the national network of public refill points. Its central location, right on the High Street, will help local residents and visitors stay refreshed and hydrated on the go.
“Making the switch to a reusable water bottle is an excellent way to cut down on single-use plastic waste. With each refill, people can save money and help to protect the environment at the same time!”
And Dunfermline Athletic Director and Provost of Fife, Councillor Jim Leishman, said: “I am pleased to see Scottish Water has chosen Dunfermline as the first town in Fife to get a Top Up Tap. I would encourage anyone walking past to come and have a go at topping up their refillable water bottles.”
Each of Scottish Water’s Refill taps are connected to units plumbed into the public water supply. They are fitted with technology which will enable them to digitally track water usage at each spot, transmitting the data via cloud technology to the specialists managing Scotland’s water networks.
James Daw from Plastic Free Dunfermline said: “Plastic-Free Dunfermline is delighted Scottish Water’s new outdoor refill point is installed and ready to use. We urge everyone in Dunfermline to always carry their refillable bottles and fill up from it as necessary.
"By doing so we will avoid buying plastic bottles on-the-go, save money and help to ‘turn off the flow’ of single-use plastic, which is so harmful to the environment.”
The taps also come with an important education message for children and adults, promoting water as an easy and healthy alternative to other drinks.
The event was also attended pupils form the town’s Lynburn Primary, along with teacher Lorna Lang. Mrs Lang leads the school’s Green Team which helps educate pupils and staff about recycling and energy saving.
She said: "Pupils from our Green Team were delighted to be invited to be part of the tap launch. The children have been thinking about why we need to drink water to stay healthy and how the tap could reduce single use plastics in Dunfermline, so it was very interesting and useful for them to attend the launch.”
To find out where our ten Refill taps are go to: yourwateryourlife.co.uk.
Scroll to top