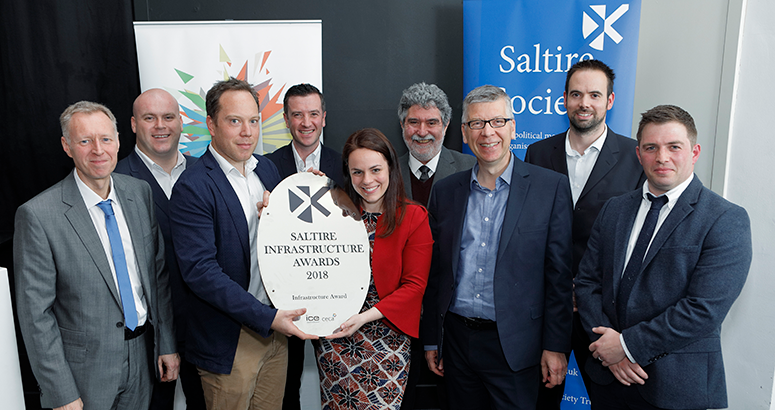 The annual Saltire Infrastructure Awards recognise excellence and innovation in civil engineering and celebrate its contribution to our quality of life.

The Shieldhall Tunnel was the flagship project in Scottish Water’s £250m investment to tackle flooding and improve water quality in the River Clyde.

The project involved the construction of a 3.1 mile-long tunnel, the biggest storm water storage tunnel in Scotland, which required considerable mineworking consolidation along a challenging route – passing beneath three railway lines, three parks and the M77.

The Forth Replacement Crossing project, with the dramatic Queensferry Crossing as its centrepiece, won the Greatest Contribution to Scotland Award.

Presenting the awards at a special ceremony at the National Museum of Scotland in Edinburgh last night (Weds.), Kate Forbes, MSP, Minister for Public Finance and Digital Economy said: “I was pleased to see the Shieldhall Tunnel win this year’s Infrastructure Award. To complete such a large project in a busy urban area with so little disruption is truly worthy of recognition.

“And I am of course delighted that the newest Scottish icon, the Queensferry Crossing, has been recognised for its contribution to Scotland. It is delivering extensive benefits to users and communities whilst safeguarding vital transport connections, helping families and businesses right across the country.

“These projects, and the many others that are being taken forward, create a legacy for the people of Scotland.”

Convenor of the judging panel, Ainslie McLaughlin, said: “Our awards showcase the incredible feats of civil engineering and the unsung heroes behind them. The scale and complexity faced in delivering the Forth Replacement Crossing and Shieldhall Tunnel projects make them very worthy winners but all the entries showcase the ingenuity, expertise and dedication required to overcome technical constraints whilst maintaining safety and quality standards and minimising environmental impact.

“The projects are already demonstrating their worth by protecting communities from flooding and safeguarding vital transport connections.”

Douglas Millican, Scottish Water’s chief executive, welcomed news of the tunnel’s award and said: “I am delighted that the Shieldhall Tunnel, which was the flagship project in the biggest investment in the Glasgow area’s waste water infrastructure since Victorian times, has won such a prestigious award.

“Its success is testament to the skills, technical ability and hard work of everyone involved in the planning and delivery of a fantastic project which was formally completed this summer and is now helping to improve river water quality in the Clyde and tackle flooding in the south of the city.”

The Shieldhall Tunnel has also been shortlisted among finalists from around the world in the Institution of Civil Engineers’ People’s Choice Awards, the results of which will be announced on November 6.