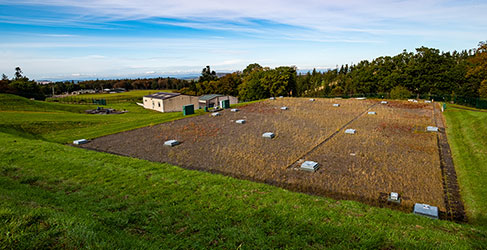 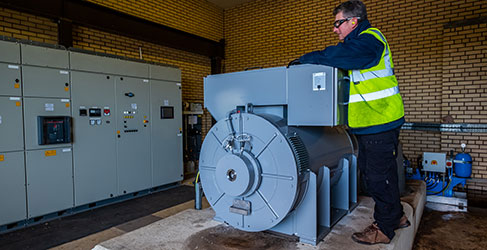 State of the art generator at Castle Moffat

It is nestled away in a remote part of East Lothian - yet many people have no idea it is there and is one of Scottish Water’s most environmentally friendly sites.

The site provides on average 21 Ml/day of clean, fresh drinking water to approximately 47,000 customers across all of East Lothian.

This self-sufficiency is a result of hydro power which is supplied by a new state of the art generator and control panel which were upgraded in a £200,000 investment last May. The original hydroturbine, which is more than 50 years old, was installed on the site in 1992 and was in need of refurbishment.

Castle Moffat WTW is the only Scottish Water asset where pumped water is used to power a site. The water is pumped from Hungry Snout Pumping Station at Whiteadder Reservoir, over Friar’s Nose Hill and then drops by gravity to the site inlet. It generates 750,000 kWh/annum - enough to power 2,416 homes.

The site uses around 80 per cent of the electricity it generates from the turbine with the remaining 20% exported to National Grid.

Claire Chapman, Renewable Generation Manager at Scottish Water, said: “Castle Moffat is a unique site of ours. It is our only water treatment work where we have a hydroturbine on a pumped water supply. The introduction of the Feed in Tariffs in 2010 have meant that typically, only gravity-fed hydroturbines have been promoted across Scotland, as pumped sites did not attract funding. However, because we offset nearly all the electricity generated at the Treatment Works, it is still a financially viable site for Scottish Water.

“This is a good example of how Scottish Water uses innovative technology to best adapt to  Scotland’s topography, to build sites that best serve its customers. And in this case it is not only a very clever technically built site in terms of how it pumps water but how it able to harnesses hydro power and use that energy to operate the site which is great news for the environment.

“At times Castle Moffat also gives electricity to the National Grid, showing it is possible to maximize the economic advantages that can come from Scottish Water assets.”

“Castle Moffat is really important in terms of the direction we’re moving in with our carbon footprint and trying to reduce the amount of electricity we use. Using renewable technology like hydro and getting greater value from our day-to-day practices is helping us play our part in tackling the climate change emergency.”

Treating water is an energy intensive process and with Scottish Water’s carbon footprint dominated by electricity at around 69%, natural resources are being put to good use at Castle Moffat works and off-setting the site’s power consumption.

A range of renewable initiatives like at the one Castle Moffat are helping Scottish Water make a significant contribution to Scotland’s national economic, carbon and renewable energy targets.