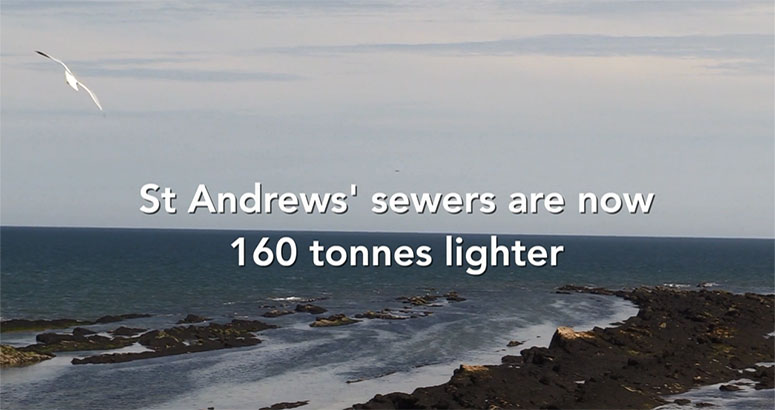 Watch our video to find out about the success of the project and hear what stakeholders had to say.

“This has been a great initiative with real benefits for the town and local businesses. Raising awareness of this issue is so important for the environment, for businesses and for customers who want to know places they eat and drink are being responsible.”

Sewers in St Andrews are 160 tonnes lighter after being put on a diet by Scottish Water.

Scottish Water launched its first ever proactive drive to reduce the amount of fats, oils and grease (known as FOG) being put into the sewer network in St Andrews last September.

The dramatic weight loss – equivalent to the weight of 28 adult elephants - was achieved with the help of dozens of businesses which serve food. They were visited as part of the unique drive and as a result have fitted grease trapping equipment to their kitchens. Some had no traps at all, while others were using ones which were the wrong size.

We worked with environmental inspectors from Environmental Compliance and Services (ECAS) to visit 172 businesses which serve food to educate them on the importance of disposing of FOG the right way. Businesses included restaurants, cafés, hotels, fast food outlets, academic institutions, supermarkets, and nursing homes.

Staff were given advice and support on best kitchen practices and, after their kitchen areas were inspected, they were advised what grease trapping equipment they needed.

The campaign proved so successful it was expanded to include a number of businesses in Cupar and the Quayside in Dundee.

As a result of the campaign 119 new or bigger grease traps were fitted – ensuring fats, oils and grease are stopped from going into the sewers and causing fatbergs, which can lead to blockages and ultimately pollution.

ECAS says this will prevent 140 tonnes of FOG in the town’s sewer in the first year and every year after.

We also carried out a six-week ‘deep clean’ of the sewers in the main streets in St Andrews, when 20 tonnes of FOG was vacuumed out using specialist equipment. This takes the total weight loss for the town’s sewers to a staggering 160 tonnes.

When FOG goes down sinks and drains instead of being trapped at source it can build up in the pipes and become fatbergs. This can potentially lead to blockages which case flooding and can harm the environment, including rivers and oceans.

Mike Will, Waste Water Operations General Manager at Scottish Water, said: “As a result of our time in Fife the sewers will be 160 tonnes lighter of FOG. There was no secret to this diet’s success - this weight loss was only possible with the incredible support from the businesses we visited.

“Collectively, businesses spent around £500,000 fitting new or bigger grease trapping equipment. That highlights just how much they care for their community.

“As part of this fat-free drive Scottish Water carried out a major sewer clean in St Andrews. We hope this prevention and cure approach will make for a much healthier and slimmer sewer network and a significant reduction in the number blockages.

“This is great news for the environment we would like to thank everyone who has done their bit to protect our sewers and ultimately our waters.” 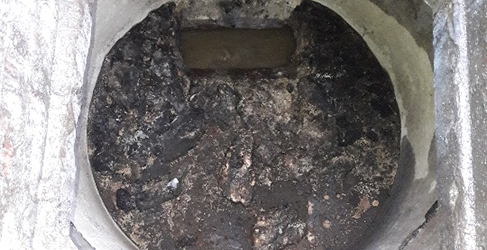 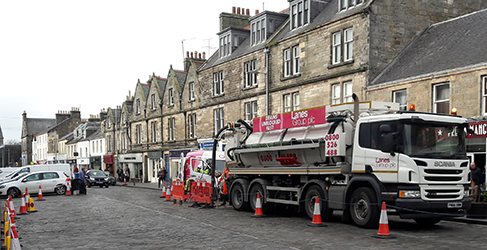 To mark World Oceans Day – a global initiative to celebrate and honour the ocean – Scottish Water today handed out gunk pots to people in St Andrews to encourage them to properly dispose of  waste fats, oils and grease from their kitchens.

Philip Soden, Managing Director of ECAS, said the secret to the diet’s success was educating people who worked in kitchens. He said: “Every food business we’ve worked with, now fully understands how incredibly important it is to dispose of fats, oils and grease in a responsible way – using proper grease trapping equipment.

“Most people simply didn’t realise their own actions could potentially lead to sewer flooding, causing irreparable damage to their own community. Of all the places we have worked we found businesses in Fife were among the most keen to do their bit to protect their environment.”

ECAS and Scottish Water will continue to work with businesses who fitted FOG-trapping equipment to ensure  they are being properly maintained so the sewers stay fat-free.

Stephen Gethins, MP for North East Fife, who attended the launch of the pilot programme in September, praised the results. He said: "This has been a great initiative with real benefits for the town and local businesses.

"Raising awareness of this issue is so important for the environment, for businesses and for customers who want to know places they eat and drink are being responsible.

“This is great work and I hope the efforts and investment by Scottish Water into cleaning the sewer network, will have long-term benefits for the whole town.”

Scottish Water worked closely with Fife Council’s environment team on the project. Councillor Ross Vettraino, Fife Council's environment spokesman, said: “Scottish Water must be applauded for implementing this initiative which has huge environmental and financial benefits for the entire community.  Praise must also go to those in the business and commercial community who have put in place the changes required to make the project a success”

A number of businesses helped promote the campaign, including award-winning fish and chip shop Cromars which offered fat-free fish for a day.

Owner Wendy Frame said: "I think it's brilliant so many food establishments took part. For us it was reassuring to know we were disposing of our grease in the right way - but we also discovered we could do more and are now doing so.”

Keep Scotland Beautiful also welcomed the campaign. Aoife Hutton, Project Officer at the charity, said:  “We welcomed the launch of this project to stop kitchen fats, oils and grease from entering drains and the wider environment, and are delighted there have been such positive results. With such excellent buy-in from businesses - and the sewer network 160 tonnes of fat oil and grease lighter - the environment of St Andrews and its two award-winning beaches will no doubt reap the rewards.”

The success of the St Andrews Drains on a Diet drive has led to Scottish Water looking at other areas to carry out more proactive FOG-fighting work.