Water Drinkers in Scotland Tap In to 'Smart' Top Up Points 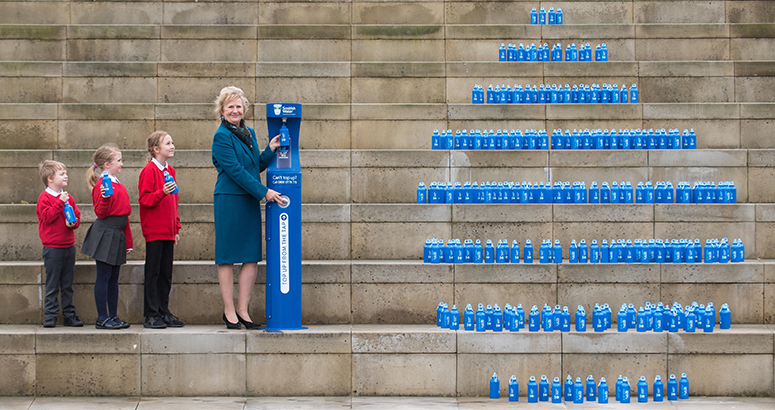 A network of high-tech public water refill points is to be introduced across the country to encourage people to top up from the tap using refillable bottles.

The project will see Scottish Water Top up Taps installed in around 30 towns and cities over the next two years.

Edinburgh has been selected as the first location with the capital’s new Top up Tap to be located outside the Scottish Parliament.

Scottish Water plans to work with every local authority to identify suitable locations. The aim is to have the first ten Top up Taps installed by the end of March 2019.  The other sites being considered include Glasgow, Ayr, Dumfries, Dunfermline, Fort William, Milngavie, Oban, Inverness and Aberdeen.

Each unit will be plumbed into the public water supply and fitted with technology which will enable them to digitally track water usage at each spot, transmitting the data via cloud technology to the specialists managing Scotland’s water networks.

Data loggers inside will provide information which can be translated into cost and plastic savings and the volume of water used.

Douglas Millican, Scottish Water Chief Executive, said: “The creation of a new network of public Top up Taps across the country as part of our Your Water, Your Life campaign, is a significant boost in encouraging more people to choose to drink tap water in their daily lives.

“Our research shows that people feel very positively towards the quality of Scotland’s tap water – now these state-of-the-art taps can provide access to enable water drinkers to enjoy it while on the go by carrying and using refillable bottles.”

The national drive to encourage people to stay hydrated and healthy by drinking water from the tap in refillable bottles was set out in the Scottish Government’s Programme for Government 2018-2019.

Earlier this summer, Scottish Water launched Your Water, Your Life – a campaign to show how topping up from the tap can benefit health and wellbeing, saves money and helps reduce waste and impact on the environment.

Customer research carried out for Scottish Water, highlights that tap is the water of choice for almost two thirds of people in Scotland (65 per cent), and currently over a third (36 per cent) carry reusable bottles always or often when they are out and about.

The utility aims to use the new Top up Taps as a catalyst to encourage more people to choose to carry a refillable bottle – with less than a third of people (30 per cent) stating they’d be happy to go into a café and ask for their bottle to be filled.

The Top up Taps are made from marine-grade steel and are connected safely and securely to the mains water supply with public health and legislative requirements fully taken into account and inspections carried out regularly.

The first installation in Edinburgh is expected to be completed by the end of October.

Environment Secretary Roseanna Cunningham said: “I am delighted that our Programme for Government commitment to pilot the creation of a network of public water refill points is coming to fruition so quickly. By encouraging people to top up from the tap using refillable bottles, we will help cut down on our use of plastics and promote the benefits of hydration building on Scottish Water’s Your Water, Your Life campaign. I now look forward to refilling my bottle at the Top up Tap outside the parliament in the coming months.”

Transport and Environment Convener, Councillor Lesley Macinnes, said: “We’re delighted to be the first location for Scottish Water’s Top up Taps, which will soon be helping people across the country fill up on tap water with reusable bottles. As a Council we are 100% committed to reducing the amount of plastic thrown away and this new scheme is a real step in the right direction.”