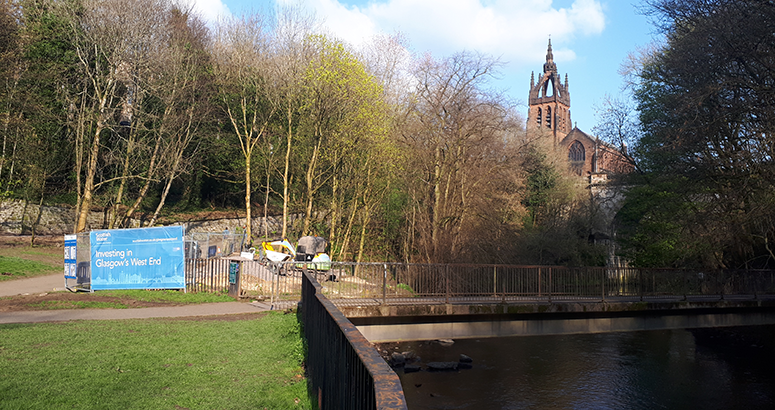 An archaeological dig will begin on a walkway at site of an old Flour Mill dating back to 1795, but the River Kelvin Walkway will remain open to pedestrians and cyclists.

The dig will be carried out adjacent to the existing flint mill site at Garriochmill Road.

The work is part of investigations included in a £15 million project by the utility to improve both the environment and water quality in the River Kelvin.

A key part of the preparatory works has included taking measures to ensure that during the archaeological dig anything of historical importance which may lie beneath the ground will be protected. Initial investigations already carried out revealed the work is likely to expose the foundations to an old Flour Mill.

The first recording of this mill dates back to 1795 and the site is thought to have comprised of a flour mill and a separate corn mill.
The dig will get underway on Monday 15 April and is expected to last two weeks.

During the works the Kelvin Walkway will remain open to pedestrians and cyclists with a short diversion route in place during the dig. This will remain in place until the main project is completed, expected to be in January 2020.

Ruaridh Macgregor, Corporate Affairs Manager at Scottish Water, said: “There is a really interesting history in this part of the River Kelvin which is why we have engaged with AOC Archaeology Group to carry out the dig ahead of the project commencing. We have already had lots of interest from local residents, keen to find out what the dig will uncover.

“We recognise this area is now a really important recreational space and we want to reassure the community that the Kelvin Walkway will remain open to all pedestrians and cyclists as normal.

“Scottish Water thanks the local community for their patience and understanding whilst we undertake these important and essential works.”

More about this work to improve the overall environment of the River Kelvin and the findings of the Archaeological dig can be found on our River Kelvin project pages.