Protecting one of Scotland’s Great Rivers 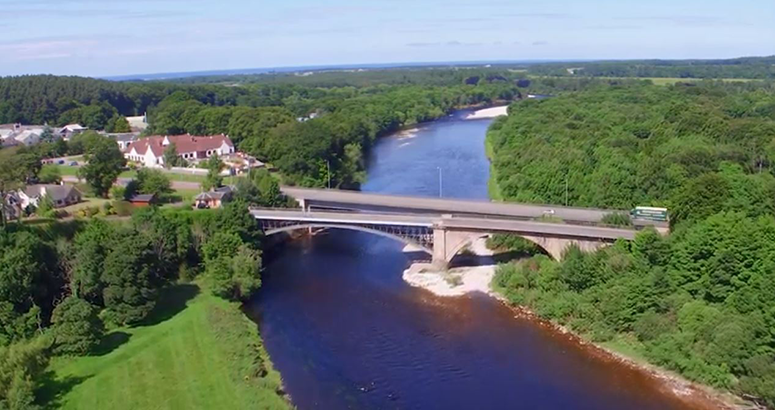 Going with the Flow

A challenging project to replace a vital pipe crossing which spans the River Spey at Fochabers in Moray is now complete.

The £1.2 million project will help to safeguard Scotland’s fastest flowing river, world renowned for its salmon fishery and whisky industry, from the risk of pollution.

The 250 metre length of replacement sewer enables waste water from Fochabers to be transferred safely across the Spey for treatment at the town’s Waste Water Treatment Works on the river's west bank.  The previous pipe was suspended beneath the nineteenth century Old Spey Bridge, which was replaced in the 1970s by the modern A96 river crossing.

Work was carried out on Scottish Water’s behalf by its delivery partner amey-Black & Veatch (aBV) and its contractor Morrison Construction.

“The project involved working next to a critical link in the trunk road network, close to communities and major businesses.  By careful preparation, we were able to complete our work safely, with minimal disruption to the road and no impact on service for customers.

"The new pipe crossing installed within the structure of the modern bridge is much safer and easier to access and maintain on an ongoing basis.

“Once the new pipe crossing was in operation, our final challenge was to remove the redundant pipework safely from beneath the historic Old Spey Bridge.  Working safely during the winter months from scaffolding suspended over 30 metres above Scotland’s fastest flowing river wasn’t easy.

"With SGN’s ongoing work, the outcome will also deliver a lasting improvement to the old bridge which continues to serve an important purpose as a pedestrian and cycle route.”

The Old Spey Bridge was first built in the early 1800s, until when this dangerous section of the Spey had to be crossed by ferry at nearby Boat of Bog.  Two of the original bridge’s three spans were washed away in the Muckle Spate of 1829, making way in 1852 for the single replacement cast iron span that remains in place today.