30 August 2021
Visitors to Balloch are now able to refill and stay hydrated thanks to a new public water tap that’s been installed in the village by Scottish Water.

Home to water sports and outdoor activities, the popular tourist destination is now also home to the bright blue Top Up Tap which is located outside the VisitScotland i-Centre in Balloch Road.

A growing network of water-refill points are popping up all over Scotland as part of Scottish Water’s Your Water Your Life campaign. The campaign is encouraging people to drink more tap water, carry a reusable water bottle when they’re out and about, and help reduce plastic waste. 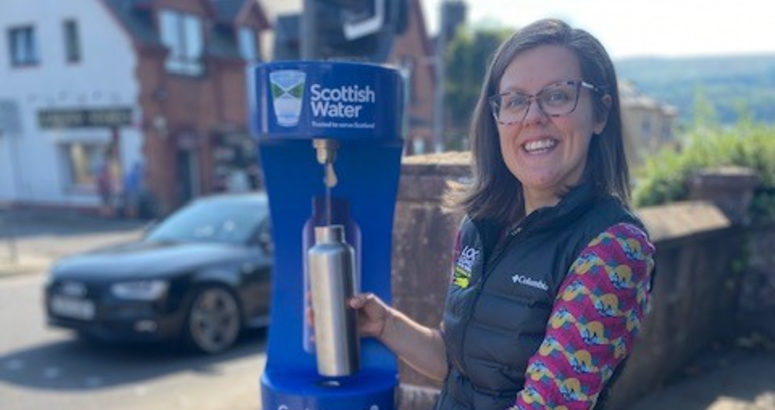 Top Up from the Tap in Balloch

The new tap is welcome news for the Loch Lomond and Trossachs National Park’s behaviour change manager who helped mark its official launch this week.

“Top Up Taps encourage people to carry reusable bottles, which will reduce the amount of littered bottles we see, but more importantly by swapping from single use plastic to reusable bottles we can all make a small change that makes a big difference to the climate emergency.”

That’s welcome news for the Loch Lomond and Trossachs National Park whose staff members helped mark the tap’s official launch this week. Nik Turner, Behaviour Change Manager for Loch Lomond & The Trossachs National Park Authority said: “Having Top Up Taps in the National Park where people can get cold and fresh water for free is amazing.  They encourage people to carry reusable bottles, which will reduce the amount of littered bottles we see, but more importantly by swapping from single use plastic to reusable bottles we can all make a small change that makes a big difference to the climate emergency.”

Georgie Reid, corporate affairs manager in the west region, said: “It’s fantastic that we now have another iconic Top Up Tap in yet another popular tourist destination, particularly with so many people enjoying a staycation this year. Visitors will be able to refill their water bottles and stay hydrated while taking in the beautiful scenery that Balloch has to offer.”

“Our taps are helping people stay hydrated on the go, save money and be kinder to the environment by reducing litter and waste. To date, our growing network of Top Up Taps across Scotland has helped save the equivalent of well over half a million plastic bottles. In fact, by mid-August 230,634 litres of water had been dispensed from the taps into refillable bottles - that adds up to the same as 698,891 330ml plastic bottles saved!”

The Balloch tap joins others which have been installed in Loch Lomond &The Trossachs National Park; one at Aberfoyle, Callander and another at Balmaha. A fifth tap is soon expected to be up and running in Rowardennan.