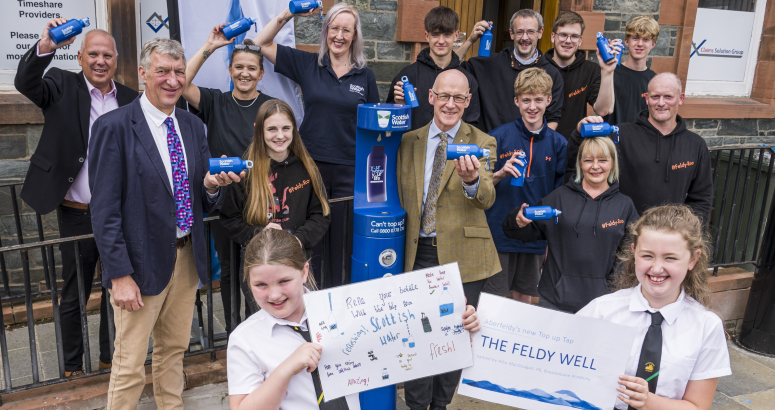 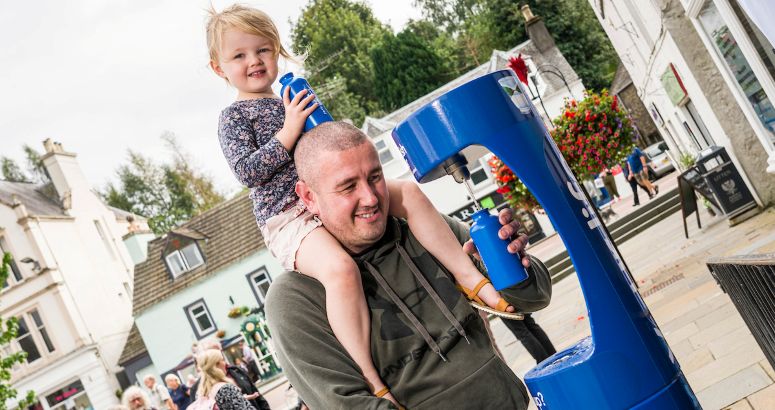 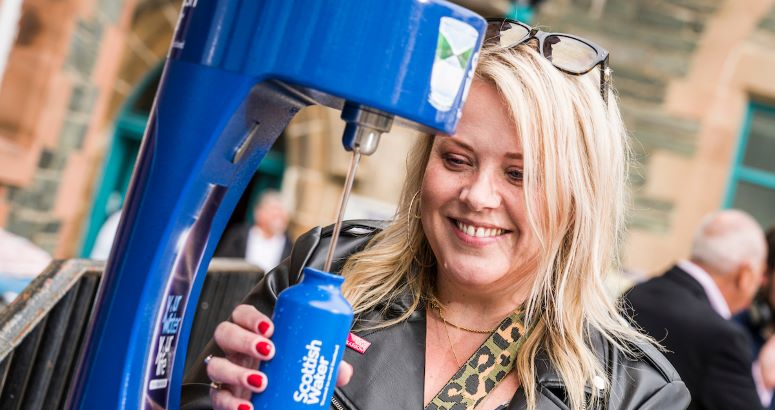 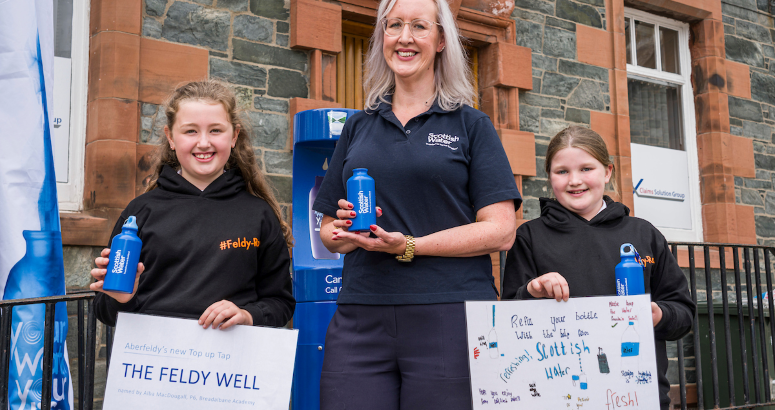 The tap has been named The Feldy Well by local pupil Alba MacDougall.

Scottish Water has dedicated its latest Top up Tap to the community spirit of the Perthshire town where it has been unveiled.

A free water refill point has been installed in The Square in Aberfeldy after community campaigners approached the publicly owned water company. The initiative originally came from volunteers who worked together during the early days of the Covid-19 pandemic to provide meals for vulnerable people under the banner of Feldy-Roo.

The team of 140 volunteers and 11 local pubs and cafes cooked and delivered more than 50,000 meals over the course of the pandemic, and raised around £200,000 in funding and grants to support the project, as well as winning a £10,000 prize to go towards another community project.

“After we won the prize for Great Britain’s Pub of the Year through our involvement with the Feldy Roo project, we approached Scottish Water to see if it was possible to buy a Top up Tap for the community.

“We had wanted to get the historical fountain in The Square operating again, but this wasn’t possible, so we thought a new tap would be the next best thing – providing fresh water for locals, school children and tourists.

“After hearing about the work the town had done throughout the pandemic, Scottish Water decided to install the tap for us as part of its current programme which is a really wonderful gesture.”

The tap was officially launched on Friday (10 September) with volunteers from Feldy-Roo, Breadalbane Academy school children and North Perthshire MSP and Deputy First Minister John Swinney all present. Councillor Mike Williamson, who was also involved in the effort to secure a tap for Aberfeldy, was also there.

It is part of a network of water refill points that is being rolled out across Scotland as part of Scottish Water’s Your Water, Your Life campaign, aimed at encouraging people to drink more tap water, carry a reusable bottle and reduce plastic waste.  Aberfeldy is the third tap to be installed in Perthshire, joining others on the High Street and at the South Inch in Perth. A further tap is expected to be installed in Pitlochry in the coming months.

The winners were P6 pupils Alba MacDougall for her tap name suggestion of The Feldy Well and Grace Smith for her poster entry. They each won a £100 Amazon voucher and a special Feldy Roo hoodie, both of which were kindly provided by the group.

“I am delighted to be part of the launch of this new tap, which will be a quality asset for the town.  It is great to see the link with the historic fountain, which remains a prominent landmark, and it will provide high quality drinking water that residents and visitors need and expect today.

“The story of how the project came to fruition is a demonstration of the strength of community spirit that exists in Aberfeldy. The Feldy Roo team has been widely and deservedly recognised for their work to support people in the town during an extremely difficult time.

“The tap is a tangible reminder of their spirit and their success – and I know they will keep going, along with Scottish Water, to make sure it is well taken care of and well used over the years ahead.”

“When we heard about the amazing work that Feldy-Roo had carried out during the Covid 19 pandemic, we were hugely impressed. We wanted to do all we could to support their ambition to install a new Top Up Tap - bringing free access to clear, fresh drinking water back to the heart of their community.

“We are in the process of rolling out a network of taps across the country to encourage people to stay hydrated on the go and protect the environment by using refillable bottles. Aberfeldy met the criteria we are looking for, not least in the engagement and enthusiasm of the whole community. They have supported us every step of the way and we’re delighted to have reached this milestone together.”
Scroll to top