H2o-To-Go is a Winning Formula at Glasgow Science Centre

06 December 2021
Two iconic landmarks have been brought together in Glasgow to become a scientific superpower.

Our latest big blue Top Up Tap is now installed at Glasgow Science Centre so that everyone can discover the benefits of water and help protect the planet. 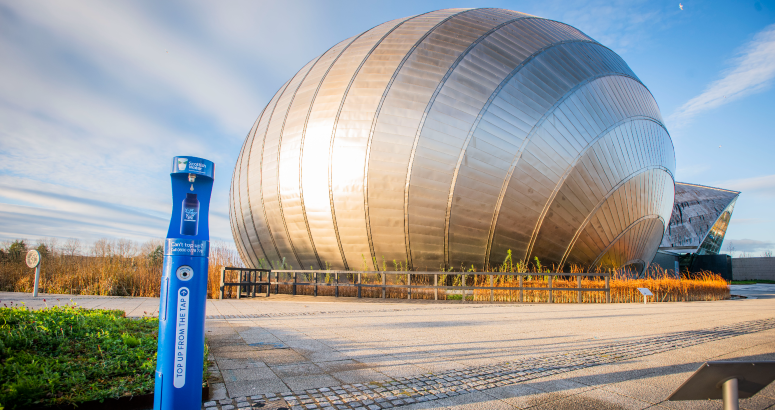 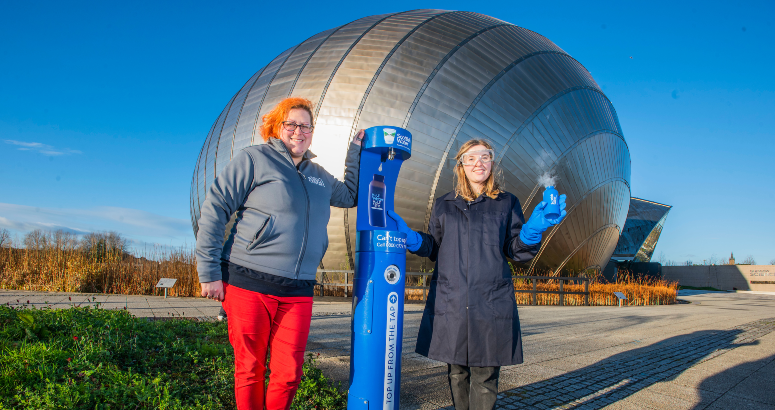 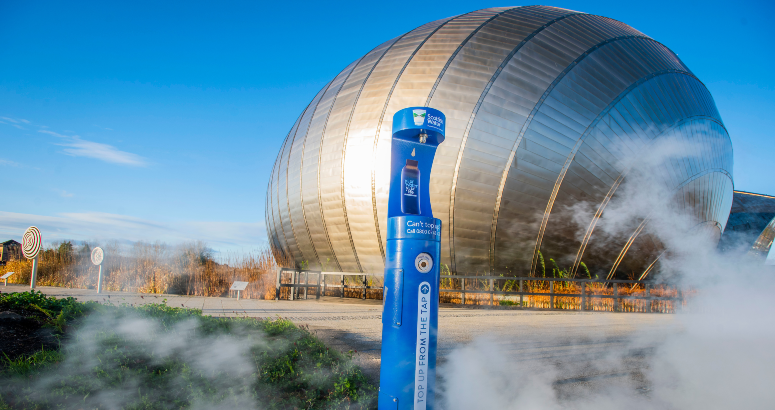 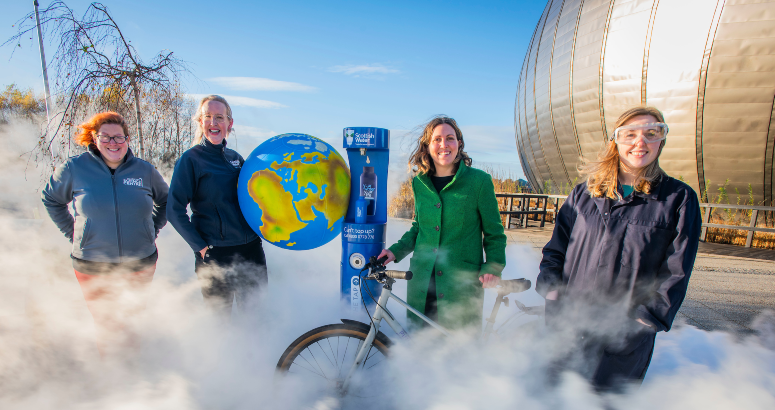 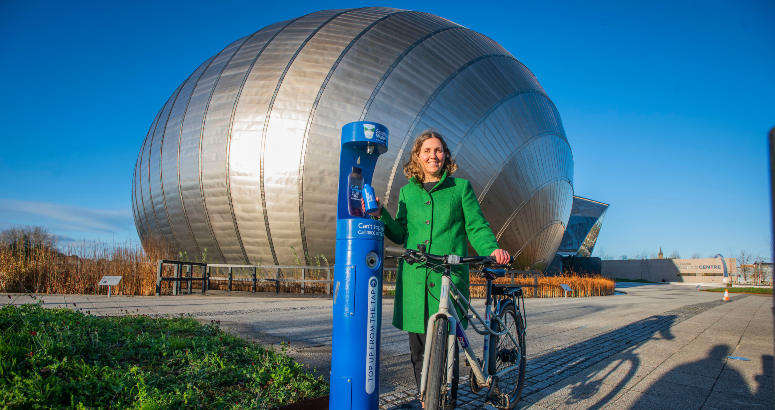 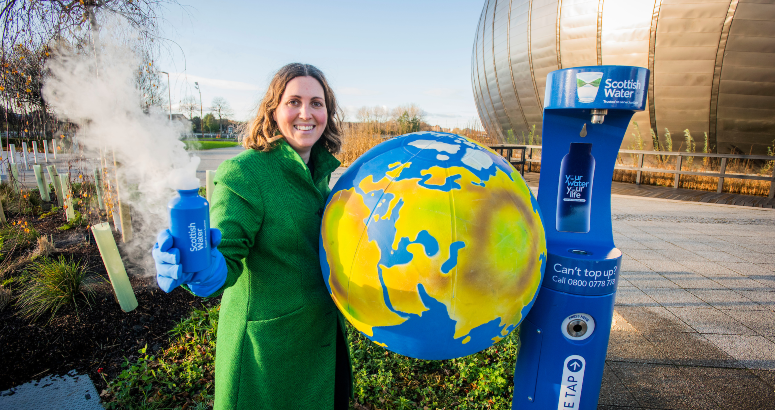 Top Up at Glasgow Science Centre

People can top up with great-tasting Scottish water before discovering the wonders of the Science Mall and Planetarium.

But the city’s newest landmark deserves an official launch of its own – with Science Centre staff throwing in a little watery magic to unveil its latest addition.

Staff joined Councillor Anna Richardson, City Convener for Sustainability and Carbon Reduction, and made up the winning formula to welcome the tap at Pacific Quay into operation. 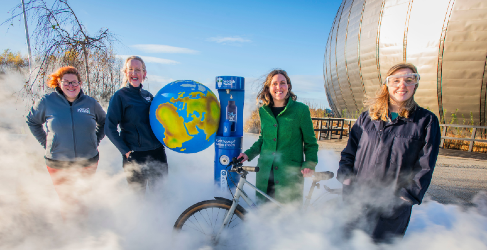 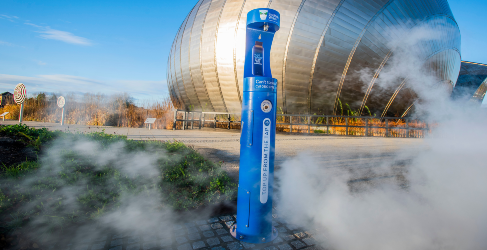 People can top up with their refillable water bottle, stay hydrated, save money and help reduce litter.

“The city’s plastic reduction strategy sets a clear goal for eliminating throw away plastic and Scottish Water’s top up taps are a vital part of the city’s efforts to encourage a refill culture for staying hydrated.”

The Wonder of Water

People can now top up with their refillable water bottle, stay hydrated, save money and help reduce litter – and that’s all before discovering the wonders of the Science Mall and Planetarium.

Inside, visitors can have fun learning all about water at a special Scottish Water exhibit that shows just how precious a resource water is. Just one per cent of the world’s water is accessible for drinking so it’s vitally important that we don’t waste it.

Speaking at the launch, Lorna Neilson, project manager at Scottish Water, said: “We’re absolutely delighted to bring one of our taps to such an iconic location here at Glasgow Science Centre.

“Last month, COP26 demonstrated that much more needs to be done to tackle climate change and it’s clear that people the length and breadth of the country share our desire to reduce single-use plastic waste by using more sustainable alternatives. That’s where Scottish Water’s Your Water Your Life Campaign comes in, making public water refill points available for everyone and encouraging people to drink tap water and carry a refillable water bottle.

She added: “Glasgow Science Centre is such a busy attraction that’s popular with families, schools, folk of all ages, so we can reach a huge and varied audience here who can help us protect the environment by joining the wave to help reduce waste. So far our top up taps across Scotland have saved the equivalent of one million single-use plastic bottles!”

The top up tap is the latest addition to the transformation of the outside space at Glasgow Science Centre which has created a welcoming, accessible and biodiverse place for communities and visitors to enjoy and interact with.

Dr Gillian Lang, Deputy Director of Science at Glasgow Science Centre, said: “We have transformed our front garden at Glasgow Science Centre into an attractive destination and thoroughfare for our local communities. The top up tap is a welcome addition and is already proving popular with visitors who are stopping to top up as they play and interact with our new outdoor exhibits. Cyclists are feeling the benefit too as the tap is located right next to the new cycle shelter and cycleway that links Pacific Drive with the Bells Bridge and National Cycle paths.”

The new water refill point joins an ever-growing network of sixty taps installed throughout the country, four of which are in Glasgow City Centre. Councillor Richardson, is a huge advocate of the taps and all they are doing to support the city’s sustainability drive. She said: “The top up taps have been really popular since they started appearing in Glasgow and it’s great to see the initiative grow further.

“In Glasgow alone, over fifty-five thousand litres of water have been drawn from the taps since the first one was introduced in Buchanan Street and it’s estimated that has saved more than 166,000 single-use plastic bottles from being thrown away.”

“People have been making best use of the taps when they are out enjoying some recreation and so it makes sense to site this latest tap next to such a well-visited attraction as the Science Centre.

“The city’s plastic reduction strategy sets a clear goal for eliminating throw away plastic and Scottish Water’s top up taps are a vital part of the city’s efforts to encourage a refill culture for staying hydrated.”

Top up taps have been installed in each council area across Scotland. The first was switched on outside the Scottish Parliament in 2018 and more will be installed over the coming months. 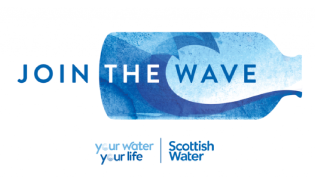